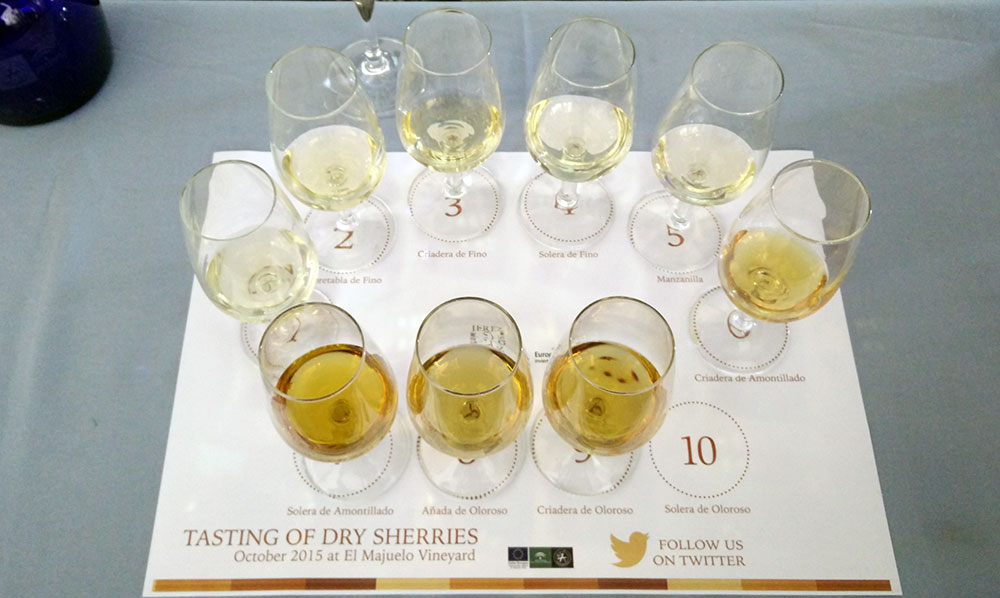 It’s the news that Sherry producers have been waiting literally decades to hear: Sherry sales have increased!

As was recently reported in terms of the UK (a principal market for the wine), Sherry sales have increased “13% in volume and 15% in value”. That’s pretty excellent news as it means that not only are people buying more of this lovely beverage, but they’re buying upper-end bottles of it as well.

This is all something of a relief for those of us who write about and love Sherry wines, but are often mystified as to why there aren’t more people drinking it. Perhaps because it’s hard to understand, although so is Burgundy or Bordeaux and well… ’nuff said. Or perhaps it’s because often the writing appears on Sherry is simplistic and pulling upon threadbare tropes.

Whatever the case, little has helped Sherry producers to date as sales year after year have been in decline no matter how many books get published that are excellent or otherwise. But what’s key in reading that article about its growth is that the Sherry folk (or at least the director of González Byass UK) don’t seem to understand the key reasons behind this growth, attributing it mostly to the fact that “fortified wine, including Sherry, is primarily consumed at home”.

This is definitely part of the overall picture and Sherry sales have most likely risen at the cost of celebratory Champagne’s, but it’s just one aspect of it. While it was mentioned in that article, I’m going to warrant that Sherry growth isn’t due to some sudden boom of people mixing Sherry cocktails at home given that Vermouth hasn’t seen corresponding sales figures and it’s tied even more into cocktails that Sherry.

I think one of the key aspects to Sherry growth is yes, people being stuck at home, but also having newfound curiosity to try things they’re not familiar with (i.e. bread baking, yoga, learning languages, etc.) that involve taking time and having a slower approach to life. I’ve always thought of Sherry as more of a meditational wine that’s best enjoyed over time and this global economic slowdown has certainly given us endless supplies of that.

There’s also the constant work by Sherry’s regulatory board to promote the drink, especially with Sherry Week, which has kept it at least “somewhere” on many people’s minds. Thus, when it came time to order up something new, they gave Sherry a try, liked it, and came back for more. And in terms of private, direct-to-consumer initiatives, we’ve finally seen the growth of Sherry wine clubs, such as Enramista in the US and Contubernio here in Spain.

There is of course a complexity to Sherry that makes it not like a standard wine, but sales are showing these aren’t one-off purchases and thus people continue to drink it. So what is it that bonded people to the drink once having tasted it?

I’m constantly saying that when it comes to food pairing, you can basically throw anything at the dry Sherries and it will almost always be magnificent. Someone who just baked up a sourdough, topping it with homemade chutney and keen bit of cheese they direct-ordered from the producer will be pretty chuffed to find out how well that goes down with a glass of Amontillado.

And then there’s the storability of Sherry. You can have a glass or two, put the stopper back in and keep it in the fridge for a couple of days or even a week until you want to drink it again. I’ve seen various wine personalities comment as to “I like Sherry but when should I drink Sherry?” and the simple answer is, whenever you want or, when it comes to the lighter variants like Fino, maybe at those moments you would have otherwise had a beer.

While it’s perhaps not as foolproof to store Sherry as using a Coravin or an Eto, this simple move of putting it to chill, works wonders due to it being a fortified wine and the various oxidative styles can keep even longer. Sounds like a perfect option when one is dining at home with just a partner or as is unfortunately the case for many, alone.

So, there’s no real mystery as to why Sherry has done and will most likely continue to do well during the pandemic. It’s an extremely versatile wine that pairs well with nearly everything, keeps more than a day, and ah yes, I forgot to mention, is a ridiculously good value for the money, probably too good on that front currently. And much as how interest in Asian dishes increased in the US when soldiers returned from wars, once we’ve gotten out of this battle with the pandemic, I’m firmly of the opinion we’ll see more Sherry on more menus now that more people have acclimated to its charms.

That people have been coming around to Sherry in seemingly large numbers is no surprise. For the Sherry producers and lovers, it may be a question as to why it took so long, but the fact it’s happened at all is truly wonderful news during a time when things are generally otherwise.

Interested in knowing Sherry a bit better? Here are but a few suggestions to try out of the vast selection of many, many excellent wines:

3 responses to “Why Sherry is reviving”