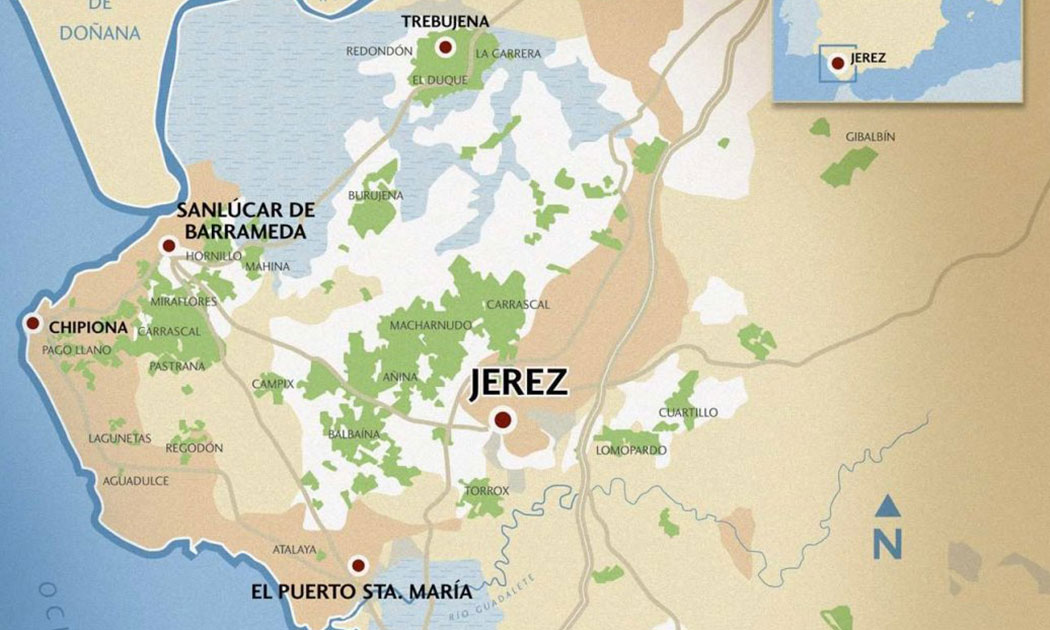 There exists something of a “reg lag” when it comes to changes to European wine region laws.

Folks in the wine community will often hear quite big changes announced and it seems that all is said and done. The truth is, the machines behind the scene (namely, official ‘bulletins’) take a good deal more time to make everything fully legal and solidified, which is what we’re now seeing with the fully-official changes announced in September 2021 that have come to be in DO Sherry as of 10 October.

One of the biggest changes is that the “Sherry Triangle” is for all purposes, no more. Previously, the three towns of: Jerez, Sanlúcar de Barrameda, and el Puerto de Santa Maria defined the aging area (or ‘Zona de Crianza’) for Sherry wines in what formed a handy triangle on the map. Now, with the addition of aging areas that match the viticulture areas in the remaining municipalities within the DO limits we have: Trebujena, Lebrija, Chipiona, Rota, Chiclana, and Puerto Real which are now able to have aging wineries within them. Thus the Sherry Triangle has been remade into something of the “Sherry Attack Wing” that essentially braces the entire coast.

Will this change the scope of Sherry in any great manner?

That will remain to be seen but it will allow those who want to have their winery in the same location as their vineyards to do so with the potential of developing enotourism offers away from the original three towns.

It might open up different flavor profiles given that final Sherry wines are defined a great deal where they’re aged, such as is seen in the wines from Sanlúcar gaining a more saline aspect to them and able to be called, Manzanilla. On that note, while any wine classed as Manzanilla has always had to come from Sanlúcar, Fino wines will not be able to be sourced there anymore. This has long made sense as Manzanilla-Sanlúcar de Barrameda is a separate DO (albeit one managed by the same folks at DO Sherry) and a DO needs to be unique so if a Fino Sherry could be produced in the Manzanilla zone, how is Manzanilla unique?

Another big change is the introduction of ‘pagos’ (same as these), essentially, single vineyard Sherries. This has been in the works for some time, especially as classic, named estates have gotten to be well-known within the Sherry fan club such as those of Macharnnudo or Carrascal amongst others. And while I just said that Sherry is defined a great deal upon where it’s aged, it’s still the case that the base material needs to be of high quality and there is indeed a great deal of difference between vineyards in the Sherry lands. This will be a relatively straightforward system with the requirement that 85% of the grapes in a pago-named wine must come from the named pago on the label.

Additionally, in terms of the vineyards, the ‘Jerez Superior’ label will now include all vineyards within the DO limits whereas before it was just for those on the chalky, albariza soils. I’m really as to a loss as to how well this classification works currently and will benefit future wines given that such classifications are always rife with strife and Bordeaux has shown that things get ugly, fast.

Also coming into being is that ‘other’, ancient grape varieties that existed in Sherry prior to phylloxera can be used in the wines. Do keep in mind that the options to date have been quite limited with just Palomino, Pedro Ximénez, and Moscatel and the latter two only found in dessert wines. As to what these exact varieties will be was unstated in this most recent update although: Mantuo (Lairén), Albillo, Cañocazo, Perruno, and Vijariego have been mentioned in the past as having been used previously. I’m also unsure as to if there are maximum quantities allowed in final blends.

In the Wild Wild West of labeling in Sherry, the terms, ‘Manzanilla Pasada’ and ‘Fino Viejo’ will now have some degree of backing law to them in that they need to be aged for at least seven years. Prior to this, it was whatever people felt like that would meet the ‘profile’. Also, the terms: ‘en rama’,’abocado’, ‘amoroso’, and others will be officially allowed although as anyone who follows Sherry knows, ‘en rama’ has been with us for some time, although like Manzanilla Pasada has been to date, what an En Rama should ‘be’ is still not fully defined which isn’t necessarily a bad thing given that it’s basically a raw Sherry.

While announced some time back, the ability to produce unfortified wines as Sherry is still pending full approval but this is a healthy list that, for such an old wine region in Spain, is really forward thinking and no end of good steps to be taking now.