ReWine & the bottle: Using a resource in plain sight

The memories are hazy from when I was a child walking into the first supermarket in my hometown. There was a glass front to the store which let in a stream of daylight. It always glistened and sparkled on the cages full of returned bottles that sat next to the shopping carts.

Every brand was there, from Coca Cola to Sprite and from Coors to Budweiser. And then in short order, they were no more.

I can’t remember when, but it seemed like from one day to the next we went from recycling glass bottles to not, with plastic containers starting to rule the supermarket beverage aisles. What happened? Well, the makers of plastic (mis)led us down a road upon which we’re still barreling full speed in the belief that plastic can be recycled when for all intensive purposed, it can’t.

If everyone was doing it…?

But why is it if we had the systems in place to reuse glass bottles already, did we abandon this?

“That would be the big question” Juan Fran Sangüesa told me recently while discussing a new pilot program that he’s directing called, ReWine. Based in Catalunya, it’s been created in order solve how to reuse wine bottles.

Note that I didn’t say, “recycle” as that’s been in place for decades now. Reuse is that second R in the Reduce, Reuse, Recycle slogan from the first wave of the environmentally conscious movement which people have conveniently forgotten because for all I can tell, it’s “icky” to have to deal with when you can just grab a new, clean bottle off the shelve with your preferred beverage inside.

While ReWine has been working on their new program since 2015, they only published their initial findings of the pilot project in October, 2020. This happened to coincide with an article by Jancis Robinson that delved into alternative packaging for wine samples. Her article was an interesting read as people are finally realizing that glass bottles are wasteful in many ways, but it seems everyone has gotten caught up with the carbon savings in making something lighter while forgetting that these alternatives are both one-use as well as non-recyclable containers. This leaves much to be desired on many fronts which is why coming back to a better way to use the glass bottle for wine packaging is so important.

Making the most of “HoReCa”

It’s important to note that ReWine, with an investment of one million euros (60% from the EU, 40% from program participants) has come about solely to understand how to recreate a system that has been largely lost but is incredibly simple: washing bottles for reuse. While there’s a great deal of export of wine from Spain (around 55% of the total bottle production), there’s also a great deal of local consumption and this is in the HoReCa sector (Hotels, Restaurants, Cafés/Bars) which ReWine realized very early on was a key pillar to implement reuse given the literal thousands of tons of glass that they go through each year.

Beyond volume, HoReCa was also an excellent target for two other points. The first is that some beer and soda producers already reuse bottles as anyone can see when an Estrella Damm truck pulls up in front of a restaurant to deliver beer and at the same time, takes away crates of empties. But the other main point is that it’s much easier to collect bottles from central HoReCa points than from individual consumers scattered around. As Juan Fran told me, “HoReCa is the easiest due to point of concentration and volume.”

But they didn’t give up on consumers either as they looked into ways for individuals who buy wines to return the bottles. I remember back when I was a kid, there was a “Redemption Value” to return bottles to a central point (usually supermarkets), but in this pilot study, this was only used at a shop that participated in the program called, Ametller. Otherwise they tried to see what would happen if people were simply told they could bring back the bottles purely in the name of environmental benefit. They ran into some roadblocks on this front however.

Juan Fran said, “We looked into setting up collection points at the “Punts Verds” [municipal recycling centers in Catalunya]. The problem with these is that they’re not close to the point of purchase nor the end consumer. 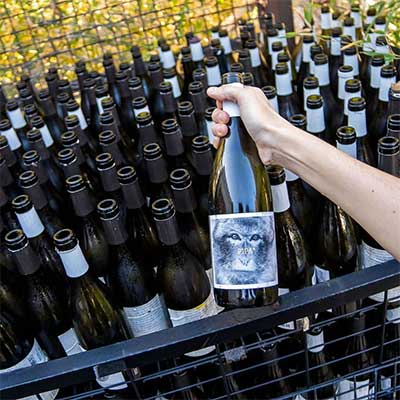 While the initial two wineries participating were Torres in Penedès and the Cooperative of Falset-Marçà in Priorat, the winery, La Vinyeta in Empordà joined in 2018 as well as Albet i Noya, Talcomraja, Vins Pravi, and Joan Ametller (that sells directly to the Ametller shops). While La Vinyeta doesn’t have the volume of Torres nor Falset-Marçà, they do a massive number of visits for a winery in Spain and likewise sell a great many wines directly from the cellar due to their very active enotourism program. I need to emphasize this as in Spain, cellar door sales are largely unheard of, unlike in France or Italy.

La Vinyeta was able to recycle bottles directly from their enotourism visits, but as they also sell very well in their local region of Girona Province, they accepted bottles back at the winery from customers. Co-owner Josep Serra said that while they’d like to ultimately reuse 70% of their bottles produced annually which represents all of their non-exported production. It’s not as impossible as it sounds given that they’ve already standardized the majority of their wine production on one type of bottle. But, “The more hands the bottles pass, the more difficult it gets to return them.” So, unless directly returning the bottles to them, it gets more difficult with each further step in the distribution chain.

So this was to set up how ReWine is addressing the most difficult aspect of this initiative which is the collection of the bottles. Once all those involved in the program had collected them (which to date are over 82,000), what then? How does one “clean” a wine bottle?

It’s all a bit more complicated than sloshing some water in and let the bottle dry as the bottles need to be cleaned to a point where they can be relabeled like new. Torres has been a strong proponent of the “ice-bucket test”. Not be confused with the viral, “ice-bucket challenge”, this is a test wherein a cleaned bottle is left in a bucket of ice water overnight to see if the label still adheres after cleaning.

I’d always been of the opinion that glass could just be reused until it broke or was too beat up up to be serviceable/presentable at which point you’d recycle it. What I learned from Juan Fran is that there is a variable point at which after a certain number of cleanings, the label won’t stick properly anymore. It’s not a question of the glass not being clean, but an issue of the outside texture not taking to the label apparently.

What’s the magic number? It appears that a bottle can easily be reused 8 times. It may be possible to use them more by changing labels and making those easier to remove but it’s a difficult balance of that and not having them come off in the ice bucket. This is an area that they’re hoping to work on more as obviously, every use is one less bottle that needs to be produced and creates exponential savings on CO2 production.

The cleaning process itself had to be investigated as well given that the original method of bottle cleaning subjected the bottles to lye (caustic soda) in order to fully remove all traces of the bottle’s former liquid inhabitant. This isn’t an environmentally-friendly manner to clean the bottles as you end up with a great deal of waste. So they switched over to using an organic soap that appears to work just as well now. According to Josep Serra the results they’ve seen in the washed bottles is, “A like-new state with no visible difference from brand new bottles.”

But now we come to the main issue of why this will currently remain a pilot program until some large, infrastructure changes happen. You see, the closest plant to Catalunya to wash the bottles is in Alicante, which is over 500km south of Barcelona…

In sending the bottles down there to be washed they’re not only negating the carbon savings, but I was told it actually makes the reused bottles more expensive than just buying new ones due to the added transportation costs. This, is a massive problem, and it all comes back to the issue of washing plants not being developed in tandem with recycling initiatives which was a grave error albeit one that could still be corrected.

In theory, it would just take two plants, placed strategically in Catalunya to handle all the washing needs and this would make the carbon and monetary savings be fully realized by reducing all costs by up to 50%. It would also allow more than 48 million bottles a year to be reused, saving hundreds of millions of CO2 annually as well as diverting nearly 22,000 tons of waste from landfills.

For now, the pilot program has shown that it does work in theory. The issue will be to translate this into the real world as at the moment, it’s the only program of its type in Europe and there’s obviously a great deal of merit to this but it requires reducing distance to washing plants, educating consumers, and also getting more cellars (many more!) on board with standardizing bottles, especially for their lower-cost, larger-production ranges of wine. Interestingly, sparkling wine producers should be some of the first on this front as they’re nearly all standardized and the bottles, being heavier to contain the pressurized wine, can stand up to reuse better than still wine bottles.

Will we see the motivation to make this come all come about from both consumers as well as wineries and even institutions? As someone who is smashing up bottles in the recycling bin constantly, I definitely hope so as with each shattering sound, all I hear is waste when what we could be hearing is environmental savings!

6 responses to “ReWine & the bottle: Using a resource in plain sight”

The Alt Empordà fires and vineyards

When the village goes dry

Digging up the details on how Avaline wine defines “transparently produced”