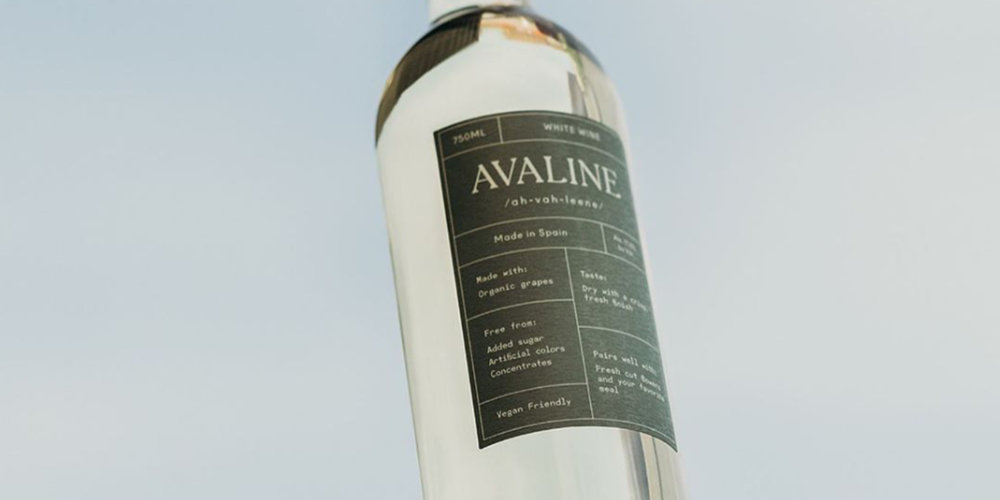 Digging up the details on how Avaline wine defines “transparently produced”

It would have been hard to avoid the news of Cameron Diaz and Katherine Power launching their white and rosé “Avaline” wine last week. In what was an amazing-to-behold marketing campaign, their PR firm, KLG managed to get placement in every lifestyle, food, and drink outlet I can think of. Additionally, they managed to piss off and in turn, get massive coverage by the wine world at large.

It seems most took issue with the “clean” identity they’re promoting because yes, it’s ridiculous as these wines are no different than countless other organic, large-production wines out on the market. The actual wines aren’t the brilliant part and are in fact pretty average sounding. What was in fact brilliant was to harness natural wine angst by using their playbook of painting a binary choice: “Our wine is natural clean and therefore better. All other wines are not.”

But this has all been debated to death and what interests me more is, what are these wines in fact? The only information on the label of the Avaline White is that it’s produced in Penedès, Catalunya from organic grapes. There’s little else known about it other than one random mention of the blend being Xarel·lo, Macabeu, and Malvasia (but not on the label).

People from various publications have requested the name of the winery or more details only to be rebuffed by the PR company. For a wine that makes the bold claim of “transparency” because it’s well, “clean”, I found all of this to be quite strange and, well, the opposite of things like the following found on their website:

As winemakers [yeah…], we are not required to tell you much about what’s in your bottle, but at Avaline, we choose to.

The facts that don’t add up

So in picking at the actual facts published on the label and how they relate to reality, I found more questions than answers, which left me scratching my head:

What’s in the bottle? 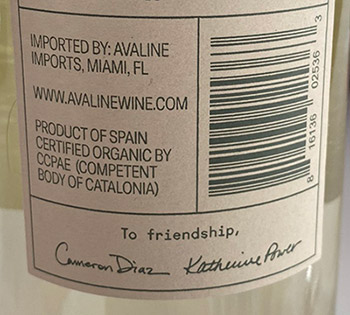 This whole strategy of obscuring the facts about the origin of the wine got me wondering and even saw me putting on my conspiracy theory tinfoil hat to wonder if the wine was perhaps not even from Penedès?

It does say, “Product of Spain” on the back label but there’s no region. This could indicate cross-blending of just about anything including regions as well as vintages. Spain has had a wine and grape surplus since 2018 which is leading to massive harvest yield reductions. So was this actually just some loose juice from various tanks from wherever they could find it on the cheap?

And even more importantly, is this even organic? There is an allusion on the back label to being certified by the Catalan organic authority but it was just tossed in with some other text. Could that have just been a flub?

In short, what the hell *is* in this bottle?

While everyone else was busy getting in Twitter fights about this wine being pro-consumer, or natural, or who do these “chicks” think they are (sexism in wine, so surprising), I decided to call people here in Catalunya and ask around about the origins of this wine. Which lead me to indeed find out where exactly the wine is produced… aaand it does actually come from Penedès. [03-12-2020: It’s unknown as to when, but Avaline has finally stated on their website that the producer is Can Ràfols dels Caus.]

Upon calling the winery, they said that they’ve signed a very strict non-disclosure agreement and requested that I not divulge details, especially that they’re the cellar making it. As I found out who was responsible for the wine prior to talking to them, I technically don’t have abide by this, but I’m honoring their request as they’re a cellar I respect a good deal. And honestly, it would just seem like a dick move given that they’re just the ones who made the wine, not the ones who want to hide this information.

Also, given the narrow band of parameters of this wine, I’m sure someone else will happen upon their identity as producing __,000 bottles of wine isn’t something that can be hidden terribly easy. I will however let someone else be that particular dick as the wine world isn’t lacking for options in this department.

I can tell you that the wine is indeed 100% produced from fully-certified organic grapes and at a fully-certified organic cellar–note that I learned this externally from the winery. The cellar in question makes excellent wines but is in no way, nor is this wine, “natural” but they are very well regarded so I’m a bit mystified as to why the Avaline folks would want to hide that as most anyone knows that despite being “winemakers” (again, sigh…), neither Cameron nor Katherine have their own winery in Catalunya to produce wine, so they’d have to source it somewhere.

Any label you want it to be

The concept of an “own-brand wine” is in fact quite common, especially in Spain where some half of all sales are as such or in the UK where it’s around 46%. What’s interesting is that a high-quality retailer such as Berry Brothers & Rudd is happy to list the producer of their own-label wines to show that it’s not just some shifty bits left over and is a source of pride.

The only reason I could see for them not listing the producer anywhere is that they want the public to be focused solely on their brand, “Avaline”. By not listing a vintage, they can move through inventory as they’d like since you don’t know if you’re buying what would be the “old” 2018 wine or the “newer” 2019 wine, just the bottle of Avaline white you see in front of you. Curious as despite the claim that they’re letting you know about everything that is in the bottle, there is absolutely no bottling date stated which compounds upon the shiftiness of not stating the vintage. Again, they don’t have to do any of this but if one is “transparent”…

Also, if they decide to at some point, they could shift to another cellar, region or blend of grapes. The American chain, Trader Joe’s does this with its wines but it’s definitely not to the benefit of the customer given that the consistency swings wildly and I as well as many others won’t buy their own-label wines. I could see Avaline going the same way, even quietly dropping the “totes organic” statement down the road to buy cheaper grapes for what is a rather overpriced wine at $24.

So, how did this come about? Yes, yes, there’s the extremely-honed “story” they have up on their website that’s little more than heavily-kneaded marketing chowder.

As far as I can piece together, this project has been in the works for awhile as shown by the original Avaline domain (www.avalinewine.com) being registered in mid-2018. It seems that when on a trip to Barcelona, Cameron and Katherine came across a wine made with Xarel·lo which impressed them a great deal because well, it’s an awesome grape. They then set out to try and find a way to get a similar wine into the US for the brand that they were developing.

The final blend is majority Xarel·lo to the point where it could actually be varietally labeled given that the Macabeu and Malvasia de Sitges (Malvasia di Lipari or Malvasija Dubrovačka in Croatia) are in much smaller parts. With the news of this wine being launched, Catalan winemakers were wondering if this was the moment when Xarel·lo might actually pop up on the consumer grape map which, I’ve been saying is long overdue seeing that it’s a very high-quality variety.

Given how much is being inexplicably hidden behind the Avaline brand, this probably won’t be the case. People will drink this wine as well as the rosé simply due to the brand and the celebrity factor. And as shown by their marketing strategy, these people will most likely be women.

When “girlie” is just silly

An analysis of the Avaline Instagram account shows that 86% of the followers are indeed women (and 28% of the total 33,000 that popped up in a week and a half, might even be fake accounts), so it may seem a good idea to market their wines mainly to women. Or is it the case that their followers are mainly women because their marketing pursues women?

And this is how it is in the United States where brands rule the conversation and are worth a great deal. More power to them, I guess. My only real criticism, within the frame of what they’re promoting, is that they didn’t introduce a red at the same time as honestly, it seems like a missed opportunity. Just about every women I know either drinks a lot of red wine or even prefers red and it seems like they’ve potentially missed a big market share just so they have bottles that are more Instagram filter “cute”.

Maybe it will come later, from say, Tuscany, Valpolicella, or… Beaujolais? and if it does, we’ll surely see Round II of wine people debate as to how all of this is a complete disaster despite the fact they’re managing to move __,000 bottles. And, if my cellar math for the region is even the least bit correct, they’re making a tidy sum in the process.

Have your bitchy tweets at the ready folks because, “clean” is the next “natural”!