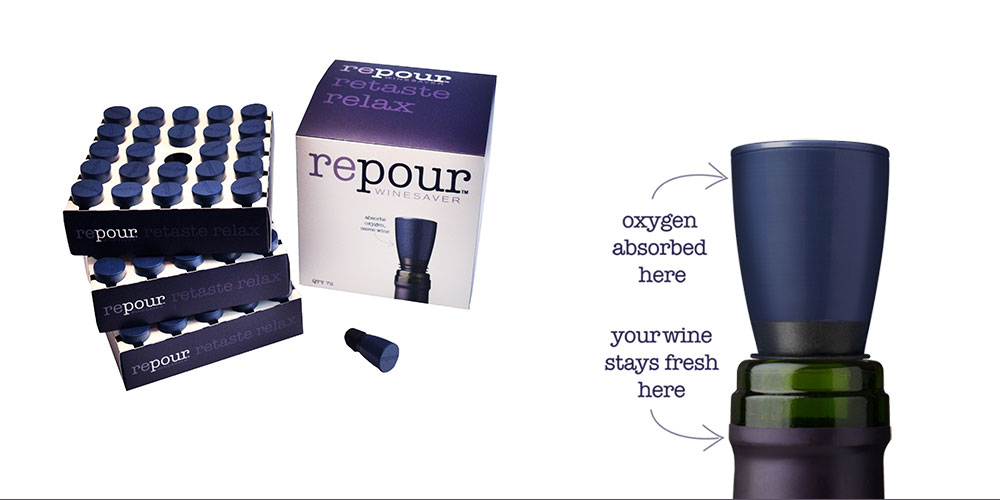 Anyone who drinks wine often or works in the wine trade will have an abundance of corkscrews as well as gifts from anyone who sees them as a wine type person. Due to that, the latest and greatest “gadget” is usually not something they’re actively seeking out.

So it was with a lot of surprise when I saw all the great praise heaped on the, Repour within the forums of Guildsomm. Every time someone mentioned it I just thought, “I’ve tried devices these before. They’re okay. I don’t get the big deal.” but I was still curious as so many working sommeliers really swore by this device for wine preservation.

I reached out to the founder of the company, Tom Lutz to tell me more.

Tom said that my reaction was a typical one and that initially they tried selling the Repour via retail channels, but with mixed success. “People would say, ‘I’ve tried a stopper and it doesn’t work.’ They’ve been swindled by many different types and so we’ve been doing all our promotion by word of mouth, looking to the wine trade first to give us a foundation of trustworthiness.”

Given this initial focus on the trade, this may be the first time you’re hearing about it so, what exactly is Repour? How is it different from the various other wine preservation devices out there?

A peak at Repour

The nutshell is that it’s a small knob of a stopper you place in a bottle of wine to absorb all the oxygen via a chemical absorption. It’s one-use per bottle (more on that below) but after testing a pack of them, I have to agree that they most definitely work and I can see why people talk them up so much.

Tom isn’t a sommelier or anyone working in the wine trade previously. He’s first and foremost a wine lover, so I was curious how he got involved in this world:

“I have a PhD in Chemistry and worked in consumer product development. About six years ago I had a new son and was up at 2AM and I started thinking about the wine from that evening my wife couldn’t finish and had just tossed away. We had to toss it because of oxygen exposure so how could you get the oxygen out of the bottle via chemically absorption? I spent a full year working on this, but thankfully a lot of the work already existed. Oxygen absorbers have been used all around us in food industry. For instance, a bag of beef jerky has an oxygen absorber in it, which is that packet at the bottom. That’s how it stays fresh.”

Inside the little plastic knob is some form of iron that binds with the free oxygen in the bottle to form iron oxide. As long as it’s in contact with the air, it’s essentially “sucking” out the 21% of oxygen that’s in our atmosphere. It comes out of the box with a foil tab. The minute you take the little protective tab bit off, it’s active and will keep absorbing material until it has no more space to bond.

Putting it to the test

I tried out the Repour on various wines over several weeks. One of the first was a Grenache from DOQ Priorat that stayed as fresh as the first day I opened it despite the fact this is a grape variety prone to oxidation. After that was a Xinomavro from Greece and I pushed it a bit, drinking the wine over two weeks but saw no noticeable reduction in quality.

Each Repour knob is designed to be used on one bottle and absorb around 1,500ml of air, so how long can you keep a bottle with one in it? Is it months like Coravin claims? Is it just a day or two like when you use one of those rubber vacuum pump stoppers? Or is it somewhere in the middle like with the Eto?

When I asked Tom, he told me, “I don’t want to tell people how to use it but thousands of reviews from people say that you can take it out to six weeks. Once the oxygen is gone, you can go for awhile.”

The key here is that unlike the Coravin which injects inert gas, this is more like the Eto that it takes the cork (ie, the problem) out of the equation and you end up in an inert environment that’s deprived of oxygen. This in effect causes one of the two “problems” in using a Repour.

One wine I tested was based on Carignan, a notoriously “reductive” grape variety in that it’s very easy for it to go into a state of being starved for oxygen. I had a first glass and then checked the wine three days after being under the Repour. Sure enough, the wine had gone into reduction with a bit of those cabbage/sulfur smells you can get. This really isn’t a problem as it means that the wine isn’t getting oxygen exposure and is in fact, preserved. The solution is to give it a bit of air via swirling or just letting a poured glass sit out for a bit. If in a service setting, this would need to be explained to a customer.

One last wine I tried was a somewhat funky kvevri, skin-contact Rkatsiteli from Georgia. When initially trying the wine, I found it fading due to two years in my cellar and the producer having the mistaken notion to not add SO2. But, I put the Repour in and came back to it four days later. It was horrible with some weird aroma I can’t really place a name to, no fruit, and a bit of mousiness in the finish.

This is something that Tom told he’s noticed as by stripping out all oxygen, it accelerates anaerobic processes in wines and those that have faults will show their faults even faster. Thus, if you’re using Repour for very funky natural wines, you might be in for an unpleasant surprise.

Tom told me that pre-pandemic, the restaurant trade made up most of their business as it’s proven to be a very effective manner to keep wines around without using Coravin. You can stick a Repour in an open bottle on Saturday night and when reopening on Tuesday, it will still be fresh. While the price is $17.99 for a pack of 10 (or $1.79 each), it drops a good deal to $0.83 apiece when buying in bulk, so it’s clear to see the appeal to restaurants who want to decrease loss of a by-the-glass program.

Due to restaurant closures, Repour has seen a very large growth in consumer sales. I have to say that in using it at home, both my wife and I were very impressed by the results and Repour really lives up to its claims. The problem (and it’s a big one for me) is that once you finish a bottle of wine, you’re left with this bit of hard plastic that’s going into the trash.

No matter what anyone might say, this isn’t getting recycled and plastic waste is a huge concern as plastic simply is not recycled like was originally being claimed. In Repour’s defense, this is a problem with Coravin as well given that their gas capsules are not recyclable despite the claims they’ve made to me on Twitter and so these too are a huge source of waste.

I expressed all of this to Tom who was already very aware of the problem, “I initially looked into the recyclable aspect of it and it seemed they were. But once digging deeper, I found out that they’re not. We’ve thought about switching to a starch-based material but the problem is that we need a substance that blocks all flow of air into the bottle and currently, hard plastic is the best option for this.”

Something that they’re apparently working on is creating a new case for the stopper knob. This could be opened so that the absorbent material inside could be swapped out. So you’d buy the case once and then buy the inserts as needed. Tom said this would ultimately reduce waste massively, reduce shipping weight, and at the same time, reduce the end cost for the customer. I hope this can come to be as it’s all exceedingly advantageous.

Ultimately if you’re looking for a solution to drinking your bottle of wine over several days and want something that’s very easy to use and very effective, or if you’re working in hospitality and need an ad hoc preservation system for by-the-glass options, I highly recommend the Repour and can now see why they’ve been so highly recommended as minus the waste issue, count me as yet one more fan.

Product samples were provided by the manufacturer, Repour