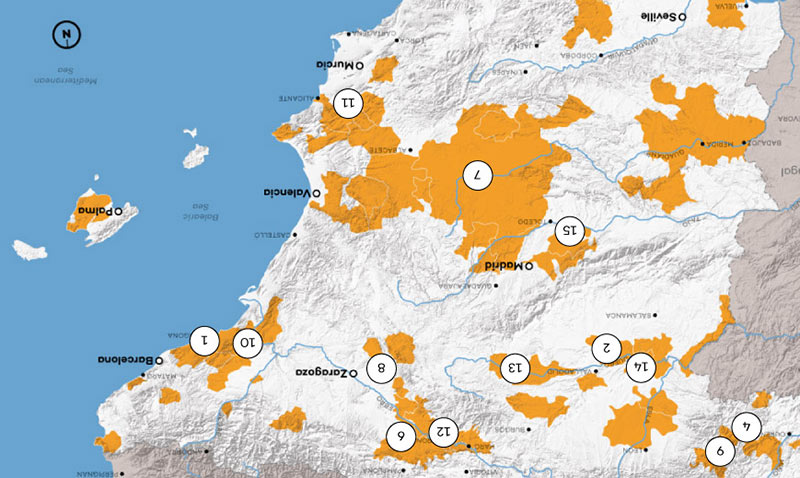 “Wine Folly’s content is often inaccurate, exceedingly narrow, and horribly derivative.” states a reviewer name W. Hughes on Amazon. His review is for the Wine Folly book which I would have to agree with as in seeing what she broadcasts in terms of Spain, I can only imagine that more complicated regions such as France and Italy must be far worse.

I bring up the issues with Spain, because I live here and know it well. I encourage those in other regions to take issue as well as in the case of Puckette’s work, it just seems downright fraudulent and “borrows” from a variety of excellent books including: the Oxford Companion to Wine, The World Atlas of Wine, Wine Grapes, and then of course, a shake of Wikipedia as well and ignoring whatever facts get in the way to make the short, choppy pieces that people think are educational but are seriously lacking and generally wrong.

This commentary comes about due to a recent “overview” of Spain on June 24th, 2016. I don’t really understand how Puckette & Co. keep publishing about Spain and yet get so many things wrong. I took big issue in this with the Wine Folly Priorat bit that went out a few months ago, but I really started getting suspect of the actual accuracy of anything in her website or book when the book trailer was released.

The graphics which Wine Folly is known for are not loved by all however, “Filled with confusing and unhelpful infographics that do not demystify the large world of wine.” states another reviewer, Debra Straus. It shows in the map of this article I allude to which does nothing to illuminate anything. It makes it look like Cava is down by Tarragona, Terra Alta is included in talking about Priorat & Montsant, and in general there are all these regions on the map that draw attention away from the ones she wants to highlight.

You should note that there was a comment on the article criticizing how confusing this map is and how mixes names of grapes and regions. Wine Folly deleted that comment. So in case you’re wondering why I wrote this, it’s because in addition to creating poor information on wine, it also appears they’re trying to quash out everyone who calls them out on it. No wonder it seems everything thinks Wine Folly is just “great”.

One region that continually flies under the radar is Spain. Spain is the third largest producer of wines in the world (after France and Italy)…

How can you start an article by saying that the third largest producer of wine in the world is “flying under the radar”? It’s like stating, “Donald Trump is a very subtle person. He opens his mouth at every given opportunity.”

Given that it’s still a minor player and not fully-defined, I don’t understand why Godello is featured but okay, fine. The bit on Txakoli however leaves one wondering is this a grape or a wine or…? For the record, it’s a wine that’s made from a variety of grapes in Basque Country but none of the grapes are mentioned nor is the fact that there are whites and rosés that don’t fit the description in the article at all, which is for a white.

One of the best ones on this list is “Rosado”. If I went told you to try a “Rosé” from France you’d look at me like I was an idiot because there are so many regions that produce it. Same thing here. To just say, “Rosado” in terms of Spain means nothing as nearly every region produce it and despite Navarra being well-known for it, these days it only makes up about 30% of their production.

The “Garnacha” item is truly annoying as it leaves out untold regions including Rioja, Méntrida (because mentioning the meager hectares of Cabernet Franc was much more important despite Grenache being their workhorse grape), and for god’s sake, Catalonia! I really don’t get why Aragón is mentioned at the primary region as they are not one of the “most devoted regions” for the grape nor are their Grenache wines highly-regarded.

As the story goes, the region was a very important wine area for nearly 1000 years, unfortunately it was abandoned when phylloxera took its tool [sic].

First of all when it comes to Priorat, what story is this?!! None of us who live here have heard of it. I mentioned Puckette’s shabby history knowledge on Priorat when she talked about the region, but it seems it persists. The monks were fully installed at the start of the 13th and were kicked out at the start of the 19th. I don’t know how that adds up to 1,000 years. Also, while there was migration, the region wasn’t abandoned. Many people stayed on which is why the cooperatives still exist. Anyways, I could go on at length as I have a great love of Priorat & Montsant and this section is just poor.

There’s more: Monastrell is in more places than just Murcia, Rioja is much more than just Tempranillo, Ribera del Duero indeed has excellent wineries, but the low-end is not “amazing”, Toro? why?, and Petit Verdot Blends because sure, why not?

But another big disservice is to Sherry which mentions only Palomino as the grape. Right, because Pedro Ximénez is more prevalent in… La Mancha? No, it’s the other key grape in Sherry production and it produces the wines that many might know because all the sweet Sherries have it as a base so leaving that out is like you’ve really not said anything about Sherry at all.

Anyways, this post got way longer than I really wanted, but it just has to be on record that what Puckette & Co. at Wine Folly publish is questionable and no one, absolutely no one should take it as a valuable reference. And those of you who think “Well, any wine knowledge is better than none” go and see what happens at a restaurant when you try to order a Grenache from Bordeaux or a Nebbiolo from Andalusia, or… well, the list is endless and if you’ve picked up Wine Folly to actually study for real wine credentials, burn that book now and forget everything it told you!

Returning to the original grape

Talking about Spain around the internets
X