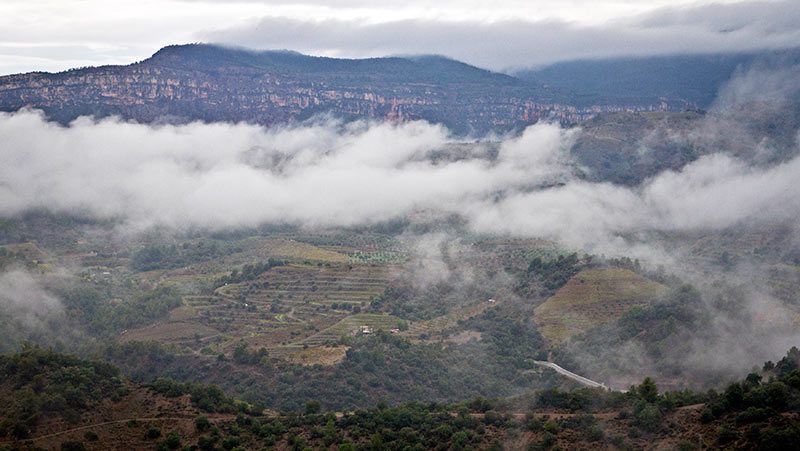 There’s usually not too much to be gained in pointing out someone else’s errors. At best, people see you as a smart ass. At worst, they see you as an asshole. Essentially, some varying shade or tincture of “ass”. Thus, you really can’t win and normally, if it were just a blog post, I’d let something like Wine Folly’s take on Priorat slide with little more than a shrug. Unfortunately I’m not afforded this option due to Madeline Puckette anointing herself as the approachable “expert” in wine and there’s just too much in this article that portrays the region inaccurately without any depth and at times, seeming to be her own personal opinion.

As I’ve stated in a previous article, I didn’t really have a problem with Wine Folly when Puckette started out. It was a cool, visually attractive project that made facts and figures about wine more graphically-appealing to people. That’s fine and people seemed to like it as they do fireworks, reality TV, or animated GIFs of cats. But then small things started popping up out of the word work like this which was a factually inaccurate bit that was actually used as the “trailer” to her book. Needless to say, this immediately made me suspicious of her book.

Someone like Puckette is inherently dangerous. She has built up a wine persona that for some reason, a good number of people respect. I sure as hell don’t have this appeal so my hat goes off to her for that. But it’s like making the Israel-Palestine conflict easier to understand by handing everyone over there teddy bears and declaring “It’s all fixed, thanks to Jesus!”

This is the same point that I arrive it and I wouldn’t be raising it except that I happen to know Priorat extremely well. I don’t like touting my own accomplishments as it’s self-indulgent. In the pretext of this however, I have to because if you’re going to say that someone else is wrong, you need to show what gives you even the first inkling of nerve to do so.

I live in Priorat, in the village of Porrera. I’ve written a first and second edition wine book for Priorat as well as for neighboring Montsant, also located in the Priorat county. I sometimes give small private wine tours, as well as guided tastings of the region. Lastly, I hold the Certified Sommelier title from the Court of Master Sommeliers but as Puckette also holds it, you can take that for whatever it may be worth.

For starters, there are of course textual issues in the article such as the fact that “Escaladei” doesn’t mean “ladder (or stairway) to God” in Catalan (or “Calatan” as it’s spelled in the article making it obvious that no proofreading took place), but in Latin. Also, it’s not “Réné Barbier” but “René Barbier” although the wine, “Finca Dofí” is then missing the accent on the “i” that apparently found its way to Réné. These are but small quibbles typical of a lot of English speakers but they open up one stank ass Pandora’s Box to much, much larger issues.

The future for this big-red-wine lovers mecca wasn’t alway secure. Priorat had all but disappeared as wine-growing region by the mid-1970s, due to fascist dictator Fancisco Franco’s subsistence-based agricultural policy and the remoteness of the region.

Once again, proofreading shines in a negative space kind of way as “Francisco” is missing an “r” and “alway” an “s”. But this statement is a perfect example of why Puckette is problematic. On the surface the sentence gives a good whiff of “factiness”. Blaming Dictator Franco always sounds good and it sounds just generally vague enough that it could be right, except that it isn’t.

For anyone who has visited the region, it’s quite easy to see that it’s a damned hard place to eek out a living. Franco didn’t need to initiate any policies although is she inferring that Franco personally shat phylloxera in to the region to crush Catalan spirit? I’m not 100% sure given how she phrases things but I’ll assume that Puckette knows phylloxera started in Europe in France and its arrival set in place a massive migration from the area. After that, beach tourism finished the job as Tarragona is just over the pass from Priorat. Given the choice between bumping your ass up and down slopes to get paid at most 0.20€ a kilogram for grapes in a good year versus selling beer and sausages to sunburned northern tourists in a beach shack, most people chose the latter. My village for instance had over 2,000 people in the late 19th century but today clings on to just about 460 and I think that includes the ambient street cat population.

The “lil’ history” section is a “lil’ scarce” and leaves out the fact that Scala Dei’s 1974 vintage was what brought René and his crew to Priorat in the first place as it was so damned good that it showed the un-tapped potential of the region. It should also be noted that there weren’t five wines in this oft-cited 1989 vintage but 10 (read more if facts don’t scare you) and another crucial fact that she’s completely missed is that they were the exact same wine.

Amongst the new group, several producers have adopted the term Clos in their name to champion the idea of site specificity.

Nah, any new winery that uses “Clos”, which isn’t a word in Castilian nor Catalan, is doing so only to invoke the name of more famous wineries in Burgundy or some “Frenchness” to make it more appealing to the international market. It’s purely marketing so don’t pay any attention to that and the “blah blah” about single property along the lines of Clos Vougeot.

It should also be noted that when talking about the grapes, Grenache is “garnatxa” in Catalan and Carignan is “carinyena” although for some time the latter has had to be written as the weirdly confusing name of Samsó due to the existence of DO Cariñena in Aragón. But why bother including any of that other than to have some depth and worth to the article instead of quoting a page from the DOQ website? Facts are a total pain in the ass when you can just skim the highlights.

Then we get in to the tasting notes which all read like someone who has tasted maybe 15 or 20 wines at most from the region and considers herself an expert. There are really too many inaccuracies for me to bother hitting upon each of them but these notes seemed garnered from impressions by others more qualified to write about wine. I say this as I was seeing them pop up after Espai Priorat last year and they’re largely based upon the 2012 and possibly 2011 vintages which were hot and played exactly in to the mindset that many people still hold of Priorat having over-extracted, large, bulky wines. This as a whole is not the general trend currently and there is a whole new degree of freshness, depth, and typicity that wasn’t fully being realized 15 years ago. It’s hard to get people to come around to this, especial when articles like Wine Folly’s continue with it, so erase all trace of her tasting notes from your memory.

As for the “Recent Vintages” suggestions, I hope no one uses this as a reference given that’s weirdly random and highly inaccurate. The “General Taste styles of Priorat’s 12 sub-zones” is something I’ve never seen before and even if it’s from the DOQ office (which I have my doubts about), I would never quote it as too many people I respect have a massively varying opinion on this, so ignore it completely–you may be noticing a theme here. And the map next to it which is apparently something Wine Folly generated is highly suspect in factual accuracy as I can immediately see it’s missing the lower half of the DO Empordà appellation which is very much not a cool thing to do. If Puckette finds a flaming bag on dog crap on her doorstep with a note that says, “From Baix Empordà with love” she’ll now know why.

This new vision for fine wine from Priorat was lead by Réné Barbier whose family and winemaking ideologies came from around Gigondas in the Southern Rhône of France shapes, and may explain why Rhône varieties are used so frequently. While some might dispute that these grapes are foreigners in Spanish soils, the various blends of Garnacha, Cariñena, Syrah, Cabernet Sauvignon and Merlot from Priorat are all at home in Spain as well.

I will close with this as it’s the bit that really pissed me off in an article by someone trying to pose as an expert generalist in wine. The only people at this level are the likes of Jancis Robinson, Andrew Jefford, and very, very few others who are much, much more knowledgeable than Puckette. I don’t even really know what she’s trying to say here as it seems she considers Barbier as solely responsible for bringing down all the varieties that are now used in Priorat. This isn’t the case in the slightest and gives a very, very skewed interpretation.

Grenache and Carignan are considered native to not only Spain, but to this region. The other varieties were already being used long before the “Clos Crew” arrived and they were starting to be planted heavily throughout Spain in the 1950s onward. Also, while René’s family is indeed originally from Provence (although their holdings were in Plan de Dieu and Rasteau in addition to Gigondas), René himself was born in Tarragona and while a Frenchman by lineage, he’s as Catalan as they come. Then of course, Cabernet Sauvignon and Merlot aren’t from the fucking Rhône Valley! They’re Bordeaux and thus cool weather grapes. Anyone who holds the Certified Sommelier title knows this more clearly than what color the sky is. Yeah, Syrah is from the Rhône, but Northern Rhône whereas Barbier’s family would have been from Southern Rhône so that makes this whole entry score about 0.5/5 points and I feel I’m being generous with that 0.5.

So for anyone who reads this Wine Folly article, take it with a grain of salt. Or, actually, avoid it altogether. It’s a factually devoid article that is simply a rehash of what Puckette pulled from the DOQ’s website, a couple of other websites, and some general ideas that I can only assume she made up out of thin air. Whether you consider me to be an expert or just a pompous Californian living in a Catalan village is immaterial because at the very least, you need to realize that if you’re looking to educate yourself about Priorat, do it elsewhere.

I mean seriously, you’ve got a wine shop where you live, right? See what they’ve got there, make sure Puckette’s book isn’t anywhere on any shelf and proceed to learn with an open mind and mouth. I will salute you!

Wine Folly a bit too literal?