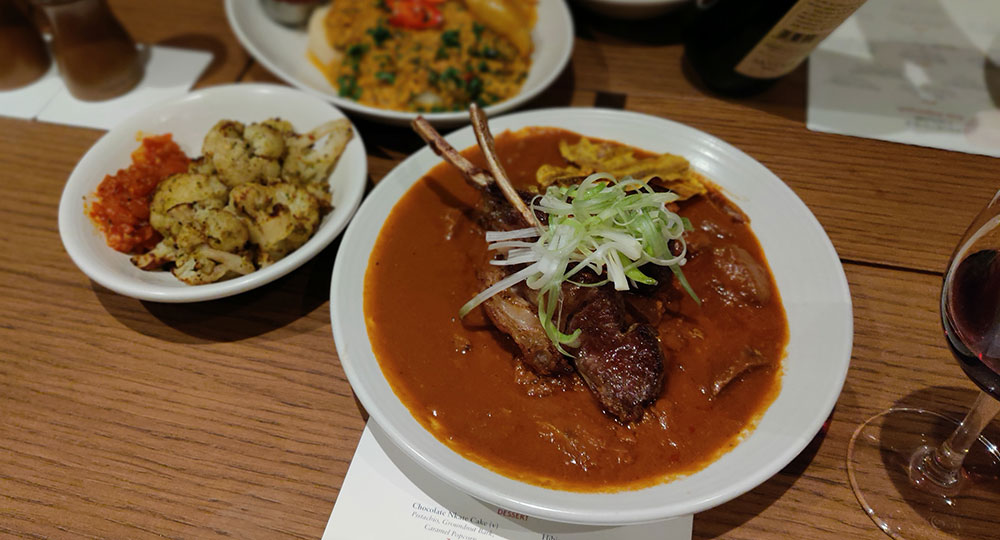 The curious business of drinking wine in Britain

While the dinner was a pop-up, the location was anything but clandestine being set at Mortimer House in London. The food wasn’t secret, radical, or some weird fusion thing served off the back of an endangered animal or naked reality TV star. It was instead, modern Ghanaian dishes by Zoe Adjonyoh. A delicious menu, it covered the greatest regional hits I’ve had the pleasure of eating from roadside restaurants throughout Ghana. The only hint that it was a pop-up was that upon arrival, we were whisked up to a sixth-floor study set up with 12 total seats between two large, “communal” tables.

We sat in between two couples at one of these tables for six. To my left were an irrelevant local couple as keen on not talking to anyone else at the table as they were on only ordering cocktails with their meal, yet having no idea what St~Germain was. To the right were a Nigerian/Azerbaijani couple who epitomized a modern London that the rest of the country seems hellbent to unravel. What was more notable about this far more interesting couple was that they represented the “modern” British wine drinker in their bottle choice: a bubbly that wasn’t Champagne with a retail price around £12. And of course, while blissfully happy with their wine, they wished they knew more about wine.

This couple would most definitely not represent the “typical” British wine drinker as the average bottle price hovers around £6 these days. But, in talking to them about what they usually drink, it showed what I simply love about the wine scene in Britain in that you can pretty much find whatever you want as shown by the fact that there was no one wine or style they adhered to.

British wine buyers are masterful at providing options and at scarily-affordable prices. The couple to the left dryly finished their cocktails, said nothing, and left. We continued to talk to this couple to the right however and, given that they worried about their perceived lack of wine-choosing ability, asked us for advice on finding the best wines in London to which we both said, “It’s simple: pay more.”

During a week stay up in “Old Blighty”–which actually had quite decent weather with little rain and mild temperatures–I attended tastings of top wines from: France, Bordeaux, Rioja, Barolo, and had a slew of various wines when out with friends and colleagues. Some were traditional. Some were “natural”. Some weren’t amazing, but they were few and far between.

Stepping out of professional settings and donning my well-worn as well as oft-preferred “drinking hat”, I picked up a number of bottles from Waitrose in the £6-10 range to see how they were. Sadly, they were all quite drinkable and even downright decent.

Why do I say sadly? Because cheap wine isn’t sustainable despite the fact that 1/3rd of the British claim that won’t spend more than £5 on a bottle of wine. Ironic given that they’ll often spend that on one pint of beer.

For a £5 bottle of wine, once you strip it down to the actual cost of wine, all that’s being paid to the producer is £0.30. Where I live in Catalunya, a kilo of grapes costs more than that, even in the skintiest of regions like Cava this is the lowest price. So, I have never understood how actual finished wine can be produced for these prices. The simple answer is that it can’t, at least in a long-term, sustainable manner.

That article linked to above about the cost of wine is quite illuminating in that if you spend £10 instead of £5, you actually get nine times more wine (yes, niiine tiiimes) and if bucking it up to £20, you get a whopping 23 times more wine than that £5 bottle. This is not insignificant and it’s why, just before leaving, I stopped in at an Oddbins to pick up wines such as The Milkwood Shiraz Viognier at £9 (HT @roo_millar) and a Morgon Côte du Py at £15.50 amongst others which have proven to be exceptional wines, even without taking their price into consideration.

What was curious is that in chatting briefly with the store clerk about a Tinta Barroca from the “Western Cape”, the discussion quickly devolved into talking about the WSET at large as when I asked for more information about the wine he said that in the classes, they just “breeze past South Africa”.

More interestingly, was that he continued to talk about how the WSET was in fact failing. Their rapid growth outside the UK in recent years was to contend with the fact that overall their growth is flat and there is a lack of wine knowledge interest by the public at large.

I’m not sure as to his source for this information but I have seen first hand that the WSET continually promotes this perception that the wine education business is booming, so you need to get qualifications so that… you can then teach more people. Obviously, there’s a saturation point that will or perhaps has already been reached so I can understand the overall gist of the clerk’s points.

This all gets back to the couple I met at the pop-up in that I so often hear from people that they “want to know more about wine”, but are often at odds with how much work one needs to undertake. People in Great Britain are definitely not the exception in this which is why books offering a quickie shortcut to wine knowledge sell well despite the fact that there are no shortcuts to proper wine knowledge and this thing called, “life” usually gets in the way.

And this is the ultimate genius in the British wine trade in that it gives people exactly what they want while offering them options if they want them but in a manner that’s understandable. This may seem like a simple premise but it is in fact exceedingly complicated with many moving parts that ultimately make wine drinking the pleasure that it is in the UK and why I take on the expense of going there given we simply don’t have anything the least bit comparable in the southern latitudes of The Continent.

Want something easy to drink and tastes decent? There’s a £5 bottle at Waitrose waiting for you in red, white, rosé, or bubbles. Want something a touch nicer that even a “regular” wine drinker will taste the difference of? There’s a £10 bottle waiting for you. Want to get the leg up on your drinking exploits? There’s the option of WSET at various levels to delve into. This last stage is clearly a big commitment in terms of time and money so just buy that £15 or £20 bottle and leave all the wine knowledge work to the very capable hands of others.

Whatever the case, while the British wine trade can at times be very old school and creaky, there is a certain structure and approach that’s worked well for the last 20 or 30 odd years which I admire greatly. At the same time I’m very, very curious to see how it goes from here given climatic and political changes that are most definitely afoot and that average price is and will continue to keep climbing.