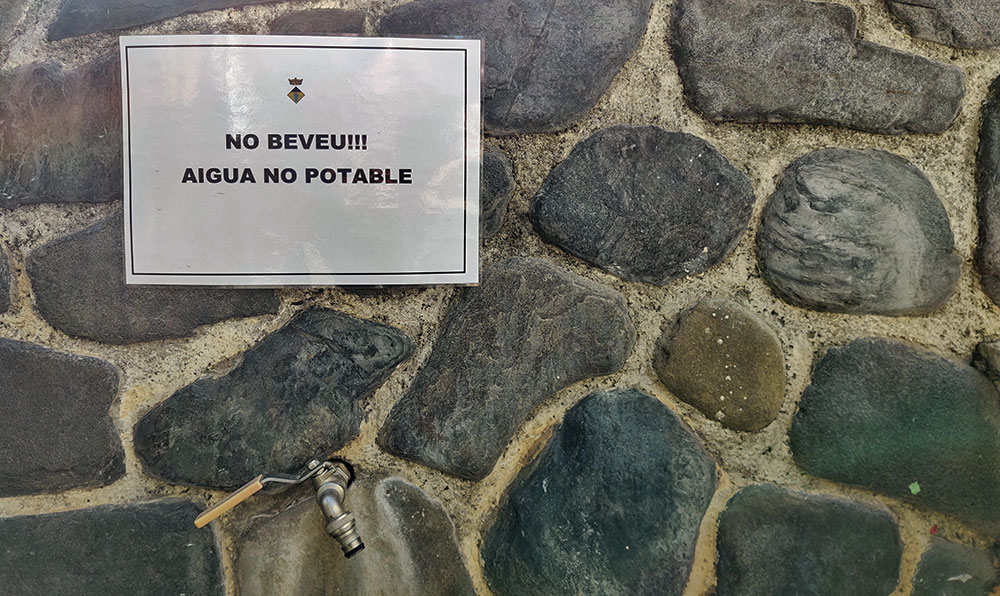 The village casal is as attractive as it is utilitarian. A four-walled testament to the religion of concrete that dominated Spanish construction in the later 20th century, it does exactly what it needs to do which is exist as a gathering point for residents; essentially a “town hall” in English, although a village with only several hundred residents hardly qualifies to be called a “town”.

Meetings aren’t terribly common however, or at least they weren’t under the previous mayor and the place wasn’t even listed on Google Maps, despite its supposed centrality and necessity to village life. This all changed when notice of the municipal water supply suddenly being undrinkable was quietly dropped in each and every mailbox.

An ambiance of disenchanted grumbling descended upon the sleepy village and the casal was called into service. A meeting on one cool fall evening saw a quarter of the entire village fill the hall to the brim. While a seemingly-small total, the other 3/4 of the population was undoubtedly filled in immediately after by those in attendance–words do not go to waste in the village.

Water cuts are par for the course in villages given that the water network is comprised of over a century of work both whole and half-assed so that the slightest tremor in pressure can cause a rupture. The concept of the water itself not being potable was however something quite new and people were more than mildly incensed over the issue.

The meeting started right on time oddly enough, most likely offset by the fact everyone had arrived at their various cliques to gossip a good 15 minutes before the official time. The prompt starting was probably also due to the mayor wanting to speak before everyone left to go back home and get their torches and pitchforks.

“So, you’re all here because of the notice that we sent out. Let me explain a bit about our water system. We have two wells for the village. One is the primary and then we have backup. The primary has been fine for almost 30 years now because it’s not like our neighbors over hill where they have to sink endless wells just to exist. We have plenty of water.”

“But what happened on November 8th with that 160mm downpour was that the primary well collapsed and is now unusable. So, we’ve switched to the secondary. Problem is, the secondary isn’t within the safety limits for drinking water because the nitrate content is just above the legal limit.”

“Then why on earth was this the secondary well if it’s not safe to drink?!!”, yelled out a concerned citizen.

“Well, the limits are new, set at 50mg/l for nitrates and that well was built before this came into effect. It wasn’t really a problem until now. But look, it’s a lot like drunk driving. We all used to drink and drive when there was no law against it and hey, we’re all fine now, right?”

The crowd wasn’t fully understanding the logic given that people did in fact die in great quantities when it was still legal to be hammered at the wheel of a moving vehicle. While not wanting to revisit a clear chasm of logic, the mayor diverted the discourse into the future.

“So anyways, we need to drill a new well, probably right next to the old one because the structure of the old well collapsed and it was rusty, so there’s risk of the rust contaminating the water.”

“Yeah, so how long will that take? We’ve already been drinking this contaminated water for three weeks!” yet another concerned citizen yelled out.

“Don’t worry, it’s in the works. Look, all of us on the village council live here too so we need it as fast as possible.”

A concerned citizen who’d done his homework prior to the meeting in the casal spoke up, “But you have the legal obligation to provide potable water to residents and if the water from the tap isn’t, then it has to be trucked in.”

The mayor had clearly been worried that such a homework-prone citizen would come to the meeting, “Well, yeah… you see, we could do that but… it’s a month contract and and costs 2,000€ and well, everything should be fixed really soon and so it doesn’t seem necessary now, does it? I mean, the tap water is at 57mg/l in nitrate contamination. It’s just a little over the limit, so we don’t need to do this do we?”

“Fine by me!” shouted out and unconcerned citizen, “I’ve been getting my water from the fountain at the church square for years.”

“Yeah! I don’t trust whatever it is that you guys do to the municipal water.”

Another village council member chimed in, “We only add chlorine to make sure it’s decontaminated.”

The mayor looked taken aback at the fervor and excitement the villagers had for drinking from the fountain on the church square. “Um, well, yes that fountain is indeed untreated. In fact it comes from a water mine and has no connection to the municipal water at all.”

“Water as mother nature intended, directly from the depths of the earth!”

“Yeah, that lady up on the hill said that it’s the best water and has the ‘higher moral ground’ because it’s so pure! People from other villages come here for this water. Even though no one in the county likes us, they love this water!”

“Right…” the mayor continued, “But by definition, this means that water is whatever comes out of the ground and in this case, that fountain tests at three times the legal limits for nitrates, something like 158mg/l…”

The room went completely dead for but a second and then a tsunami of chatter ensued. The shock of the villagers that their precious fountain was in fact the worst water they could drink was taking a bit to process. It couldn’t be true, could it? They’d been drinking that water since they were children. It was simply, the best, “purest” water there was. Everyone had been saying so for generations. Surely, people couldn’t be wrong?

The mayor waited for the rumbling to even out so that he could mop up the evening. “Okay, so we’ll be working on getting the new well set up as soon as possible. Until then, buy bottled water for drinking as well as cooking.”

With that the meeting was adjourned and it seemed the case that no future meetings might happen again on any subject. A new well was intended to be drilled in the coming weeks, but two months after the collapse, no well had appeared and no work was on the horizon.

In its place, a reverse osmosis system had been slapped on to the backup well at the bequest of the regional government authority since the water was simply not fit to drink. It was a stopgap that had all the trappings of permanence which wasn’t helped by the well proving inadequate and the water network losing pressure on weekends when everyone was at home.

Some men in the village questioned the neutrality of their new water on the grounds that it’s too “clean” and this was somehow “bad”. The women on the other hand espoused their love of its effect on having both softer hair as well as the plumbing not getting corroded. The village council only said, “Don’t abuse it.”

The natural water from the church square fountain that apparently so many people drank, continued to be both untreated and even more contaminated than the tap water despite its being thought of as “purer”. A sign was placed above it stating, “Do not drink! Water is not potable!” which would seem a reasonable method to ward off all those who intended to drink of this poor, unhealthy fountain.

But even still, once the sun sets and a cloak of darkness shrouds the village, there are those that slip out, sometimes in pairs, but always with jugs in hand to the church square. They take of this forbidden water as they remain convinced, no matter how much logic and fact is thrown their way, that this natural water is simply the healthiest, the best, and the purest.

Facts and science, be damned.

One response to “Natural water”