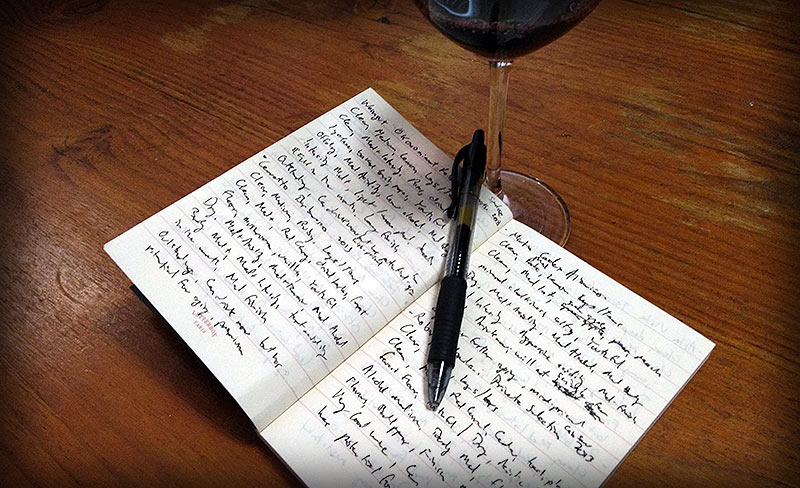 Yes, that is indeed my chicken scratch

The “Correction” in wine writing

Seems to be a melancholy, pensive time in wine writing. Steve Heimoff posted this article about the Golden Age of Wine Critics having passed. It was a nice read set in the midst of a lot of political discourse on his site these days. Richard Hemming MW wrote about how difficult the chances were in being able to make a living off of writing about wine. Ron “Hosemaster of Wine” Washam has been writing an opus called “Wine Critics in Hell” which you can read in Act I, Act II, Act III, and Act IV. I’ll warn you that, while brilliant there are arse loads of in jokes that only people in the wine world will probably get.

I fully agree with what many, including Steve, have been saying in that the days of the middle-aged to old white dude shooting numbers on a 5085-100 scale out of his ass are thankfully over. There are some who are trying to prolong this model but it won’t have any long-term legs. This isn’t because people have tired of scores, it’s because people have tired of “wine the commodity”.

The scores being shot out and many other factors that led up to out 2008 global crash made wine an investment more than just something we enjoy drinking. Wines are of course still selling for ridiculous amounts but few of us can really afford to care about those. For a time, those who are Baby Boomers and Generation X (my generation) who managed to get well-paying jobs could initially afford some of these wines. But the Millennials, in their generally low-paying jobs in the New America said “fuck it” and turned to wines that they can afford and understand. Thus why “natural” wines and others that are seemingly “low brow” (wine in a can anyone?) have seen so much protagonism lately. This has nothing to do with the rise social media other than the fact that social media happens to exist at this moment. You could say that budget airlines are the cause as well since they allow people to explore wine regions in a more affordable fashion than ever but it’s not the actual cause either.

Am I saying that the future is funk-laden “natural” wine, La Mancha, and “brosé”? No. What I’m saying is that there has been in wine writing what there was in the TV series “Person of Interest” which is The Correction. It sounds ominous as it is and there’s a massive burn off while things are realigned. Some have received the message, others have not and the fires continue to some degree

But as the ashes start smoldering out, where does this leave us in terms of wine writing? Essentially with a blank slate. I find that there are two types of wine writers: journalists who learned about wine, and wine lovers who learned about writing. With my degree in English Literature, I fall in the former, as is the case for many others, including Mr. Hemming who shares a similar, expensive piece of paper with me that makes you get “creative” in your career choices. A great many of these older white guys (and make no mistake, I’m very much Caucasian) were the latter which I believe is why scores became so paramount in wine as it made the substance easier to communicate and many consumers would rightly say, easier to understand. Unfortunately, this codification to something that has been with us as long as prostitution and taxes made it a commodity which was and continues to be an ugly thing.

Scores will continue to be of importance, but in this new landscape, even more important will be the actual writing. This is why I use a Three Star System here as it’s incredibly simple and stays the hell out of the way from talking about the winemaker and the wine by giving a quick: * Proper Wine, ** Wine that makes smiles, *** Wine that makes for table dancing. And I think ultimately a lot of people will come around to something similar as really, who gives a flying fuck if a wine is 98, 99, or 100 points? Parker is not even consistent about it as quite simply, that’s an excellent wine and… ’nuff said. If your wine “investment” hinges on these points, good for you, but for the rest of us who just enjoy drinking the substance, it’s meaningless.

Thus, the wine critic is for most of us, dead. Will this give rise to a Golden Age of Wine Writing? One can only hope so as while publications such as Noble Rot and Alquimie [ed. sadly now folded] have small followings, they’re definitely growing and it seems that there is indeed thirst for those with knowledge of wine to lead us to what is interesting in the vinified world, but it appears we now enter a phase where we do it through narrative, not numbers.

5 responses to “The “Correction” in wine writing”