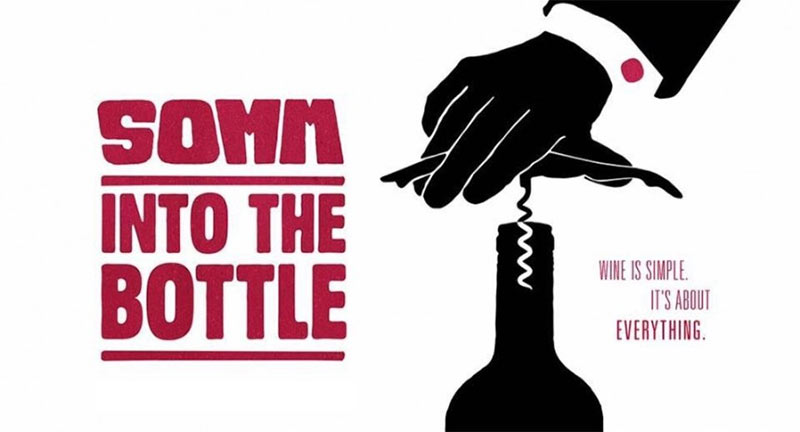 Some might wonder the logic in reviewing a film that came out eight months previous but in the case of SOMM: Into the Bottle, it was mainly because I wanted to reflect on it a bit after having watched it as it is indeed a very, very different film from the first, SOMM. It’s so different, that I don’t really see why there’s the continuation of the name as it’s not really about the sommelier craft and mostly just about wine. This of course was picked up upon in a funny Hostmaster post that gave a great deal of protagonism to Master Sommelier, Geoff Kruth’s hair.

That aside and despite the large departure from the first film, there has been a rather natural evolution between the two films. SOMM 1 started as something of a lark given that filmmaker, Jason Wise’s friend Brian McClintic was studying for the MS and so Jason started building up a film around that which is why you see Brian so much in the film. The subject matter was indeed “niche” and really for people focused on the service side of the wine world although following these guys (which again, I don’t know why no women were featured as there are many these days) in their quest to pass.

After this, Mr. Wise was filming a number of videos of wine regions around the world for the Guild of Sommeliers which ultimately showed up in SOMM 2 and the shots were gorgeous and luxurious.

And this is of course one of the tricky things about the film in that it looks great, but what was the purpose of opening all these priceless bottles? Most any issue I had was covered well in this review which is a smart breakdown of what did and didn’t work in the film. I think for me, the biggest issue was with the structure as Mr. Wise had a great wealth of material to work with but didn’t order it in a way that made for pleasurable viewing unless one is really deep in to the wine trade and watching everything on Youtube with the hashtag of #wine on it.

For me personally, I feel like the starting point should have been with the most fancy bottles and then devolved down to Geoff Kruth sitting on a blanket by a lake, sucking down oysters with a bottle of Muscadet. It would have worked to humanize wine and show that while it has been built up to be this priceless commodity, it is at its core, fermented grape juice that’s really enjoyable to drink. It seems if the filmmakers had gone in this direction, the film would have been much more cohesive and they would have been heralded as bringing the drink down to its rightful level instead of putting it up on some ridiculous pedestal, yet again .

Beyond this structural criticism, there were some other surprises. One was that Carol Meredith is awesome. I’ve never met her nor heard her talk, but if the opportunity ever arose, I’d jump on it as it’s a shame there aren’t more wine people like here. Another oddity that stuck out at me throughout the film was, “Why the fuck was Fred Dame wearing hunter’s camouflage and sitting in a duck blind?” This was addressed nearly at the end of the film, but every time he popped up it was like it was a practical joke, especially as he was then cut in with what I assume to be old footage from SOMM 1.

Lastly, wine people can be well, unpleasant and there were some people in the film that I wouldn’t necessarily want to spend much time around. But for the purposes of the film, I could handle them as they’re qualified to talk about wine. Then there were these bits of Madeline Puckette from Wine Folly that popped up and you just sit there flabbergasted. In this vast field of experts she looks so insanely out of place like if you were to drive a 1980 Datsun pickup up to the Monte Carlo in Monaco. I don’t really know why they kept her parts in as they’re painful to sit through. I will say that watching her in this film is what made me pay much more attention to what she says about Spain in general or Priorat as naturally, it’s always inaccurate.

In conclusion, SOMM 2 is worth seeing if you’re in to wine and want to see what the inside of the DRC winery looks like or you want to see beautiful wine regions beautifully filmed. It’s also interesting to catch up with the gang from SOMM 1. But, will it give you insight that you didn’t already have if you’ve been studying wine? Probably not but hey, how often do wine films come along that are actually about wine and not about shitting on Merlot?

2 responses to “Review of SOMM: Into the Bottle”

To somm or not to somm
X