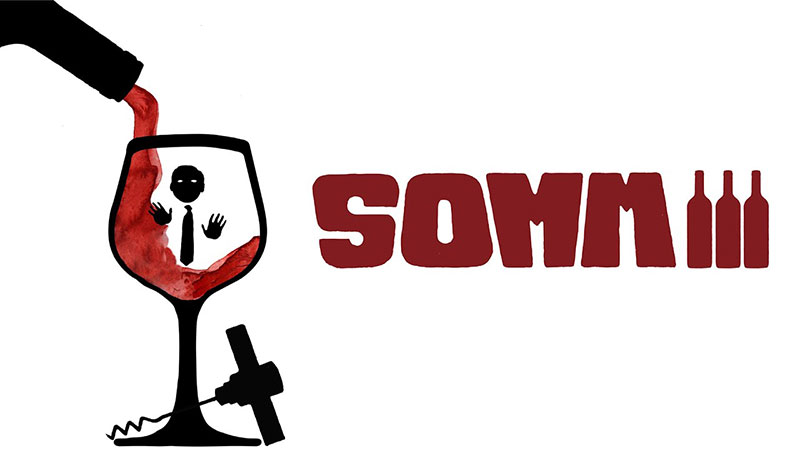 Is the little man in the glass saying, "Please stop?" Undoubtedly.

The gang behind the original SOMM documentary that was a sleeper hit back in 2012 (yeah, seven years ago…) have come back with yet another installment for our viewing pleasure. What’s curious about all things SOMM, is that each of the three movies to date has been less a continuation on the theme of the first and more of a self-contained film. So, how does SOMM 3 stack up?

To put it succinctly, it’s a far, far better film than SOMM: Into the Bottle which was less an actual film and more just a slow-moving tourism promotional video with a wine region theme that gave the filmmakers an excuse to talk famous wineries into opening very expensive and rare bottles to drink and show off with. A more proper name would have been, SOMM: Chasing the Unicorn but that was probably a bit on-the-nose.

But despite handily smacking down #2, it still doesn’t really live up to the original SOMM. There is however an overall intent and reason for the film to exist, even if it feels a bit forced at times. It gets a bit thin in a feature-length form though and would have been a lot tighter in a broadcast format of under and hour but the ultimate takeaway is that if you’re a wine geek, you’ll probably enjoy a little to a lot of it, but if you never get around to seeing it, you won’t feel like you’ve missed out as would have been the case if you’ve never seen SOMM 1.

The theme of SOMM 3 is primarily blind tasting but also, Pinot Noir. These are wine topics that have both been done to death in various media but this is because they’re both interesting, even if hard to film. Blind tasting seems like magic to those who witness it (it’s not, it’s just endless, repetition and practice which can never, ever end) and Pinot Noir has been given hallowed status as the end-all be-all of grapes due to its finicky nature and the fact the best places to grow it in the world are few and far between.

We don’t really get into either topic from the start of the film and it meanders around a bit, eventually picking up on the tasting theme which is realized via playing catch up with the “Ole Somm Gang” of the last two films. I can’t say that I much care what any of them are doing at this point as those in the group who earned the Master Sommelier title have gone on to open businesses that most people open without even bothering to do that insane exam. This is a lot like watching some intricate movie build and build to then only have the protagonist open his eyes, look around and be back at the beginning showing that “it was all a dream”. Am I saying that opening a wine shop is “a dream”? Yes, but only if you’re a Master Sommelier beforehand, otherwise you’re just insane.

What shines the best in this whirling around of wine people is that there are interviews with some of their (probably long-suffering) spouses. Nick Lander talks about his wife, Jancis Robinson and Bella Spurrier talks about her husband, Stephen Spurrier. This is an old film-making technique to have those around your protagonist act as your eyes seeing the main subject for you and it works exceedingly well. I’ll be honest, I could have just had a film of this and been quite happy as these are voices you rarely hear but, speaking from personal experience, are just as important as the more famous name you know and are always interesting people themselves.

We also get to see Fred Dame not being a menace and by that I mean that he actually comes across as human–this is helped in no small part by there not being footage of him in gear out on a duck hunt. It’s always the case that the man’s one liners are captured on film more than the person himself and you can see that there’s a great deal of depth to him that’s rarely shown. This was much appreciated.

There was this odd bit where various clips were edited to explain who Robert Parker is and his influence on wine, to then knock him down a peg. Maybe most people won’t take much issue with this, but it really seemed like a passive-aggressive temper tantrum because he refused to be included in the films and this is how the filmmakers got back at him. I have my issues with both Robert Parker’s approach and the continuing legacy of The Wine Advocate but this really came across as childish to me.

Then we get into recapping the “Judgment of Paris”, yet again. Look, I realize it was an important event and it really made Stephen’s career (eventually) but hot-buttered, sweet Baby Jesus I’m so damned tired of it. Clearly, this recap was to set up this “Judgment of Pinot” that was to occur in the last part of the film but it was just so forced and laborious that it slowed the film down massively. Anyone who is in wine and is interested in the event (who are really going to be the people watching any of the SOMM films) are already going to know the story and have probably attended recreations of the tasting at one of its many anniversaries. It was also not helped by the narration of Madeleine Puckette who, like in SOMM 2 appeared really out of place and dragged the film like rogue boat anchor whenever she appeared. You can read more about my issues on that front if you like.

From this scattered chunk at the beginning, we then get to the meat of the Judgment of Pinot which has essentially two parts, one in NYC and one in Paris. This is the point where your spouse, who was quietly watching the film with you to be nice, will probably want to leave the room and where you, the wine geek will get unbearably intense.

The two tastings with the Young Wine Fogeys in NYC and the Old Wine Fogeys in Paris were an interesting comparison of the Pinot Noir grape, showing off classic and newer regions. The only problem is that it really skimmed off a small section of the wines produced with Pinot Noir these days and then a smaller selection was presented to the Old Wine Fogeys which arrived to a completely inconclusive result that sorta, probably hinted at the wine from the New World being their choice, maybe, on that given day and at that given moment. You know, conclusive.

Again, the set up to this will be interesting to the wine geek but you’ll not come away completely satisfied which is unsurprising as wine is so incredibly subjective. It’s also incredibly difficult to make it come to life on the screen which is why at various points, I really felt like I was watching the six-part TV series, Uncorked for most of this.

Interesting? Sure. Must-see? Depends on your level of geekery and the patience of your spouse.

To somm or not to somm