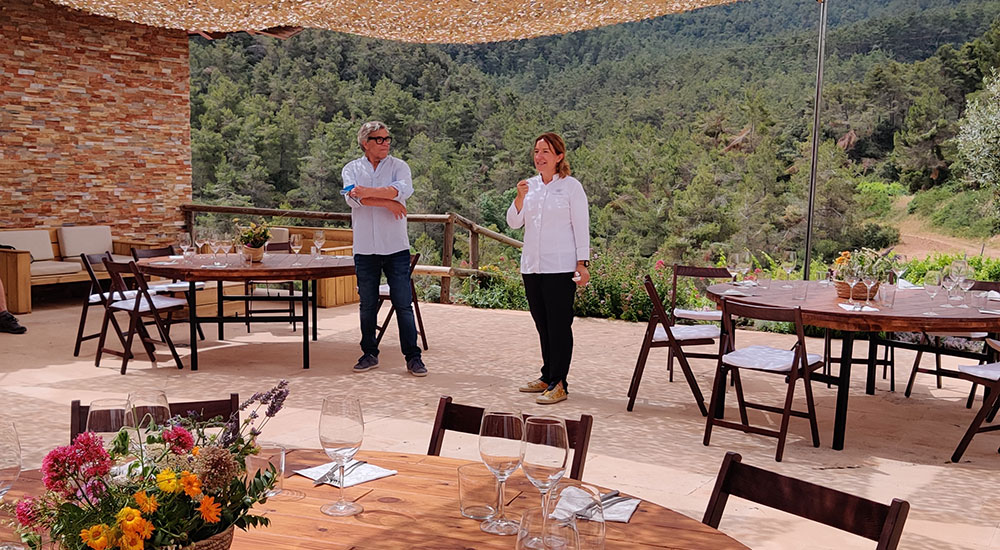 Like most everything during the pandemic of the last year and a half, enotourism has had to pivot and change from what had become standard issue.

Showing up to a winery and tasting a couple of wines became a great deal harder starting in March of 2020. There’s no secret nor should there be no surprise that enotourism was in fact paralyzed for a good many months in all wine regions of the world as we came to grips with what was then, a new reality. Even when things opened up (far too early) in the summer of 2020, the idea of packing people into a tasting room for mass footfall or large group tours had to be tossed out the window.

As we’re (hopefully) emerging on the other side of this thing in a wobbly manner, many of the implementations and workarounds from the last year appear set to stay. For a region like Napa Valley, they were in fact long overdue and as this press release points out, the idea of the smaller, more intimate visit seems to be here to stay. Ultimately, I can’t believe that old tasting patterns won’t come back in some fashion but it was a fact that Napa Valley was overloaded and something had to change and given that most wineries had written off all of 2020 and 2021, it gave them a chance to change the direction of a very large ship.

For a country like Spain, enotourism is a great deal different. Beyond Penedès, the concept of large groups jamming down to wine regions and choking up the place are largely unheard of due to the physical nature of wine production, but also as almost all wine regions are far from population centers. But it appears the concept of “intimate” has arrived and just might stay for the near future.

In the valley gorge

A few weeks ago, I was invited to a lunch down at Vinyes Domènech in my next door village of Capçanes. This is under the auspices of DO Montsant in Catalunya and is one of the top wineries within the DO.

For some time, they’ve been one of the wineries with foresight to create a wine club. Within this, they’ve started offering up thematic meals paired with their wines to members and this lunch was one such affair.

I was undoubtedly the most local of the guests to arrive which of course meant that I was the last. Everyone else had made a much longer trek down from Barcelona. This then begs the question in that besides a pleasant afternoon out in the countryside, how do you lure people to drive the two hours down from the city? Well, you make it a special event and in this case, while drinking the wines of Vinyes Domènech at the cellar was obviously the focus, the lunch made by renowned Catalan chef, Iolanda Bustos who’s had a couple of restaurants around Girona, was a keen attraction.

I had the pleasure of eating at Iolanda’s restaurant Calèndula when it was still open in Girona. A large part of her focus is using local herbs and wild plants in her dishes although don’t be misled as she’s not cooking vegetarian meals, but integrating local ingredients into everything she makes. At Calèndula she made especially great use of flowers in the dishes, sadly in an era before the Instagram boom as in addition to being delicious, they were stunning to look at as well.

Joan Ignasi Domènech, the founder of Vinyes Domènech, invited her down to cook lunch for wine club members. Prior to that however, we did a stroll through part of their property, looking and smelling the various herbs that occurred naturally which was really eye opening in that most of what we were touching and smelling I’d thought were just weeds. Unbeknownst to me, the winery has actually been working on this for some time in cataloguing every type of plant that grows in the property and Iolanda’s dishes all focused on making use of what was there.

When we sat down for the meal, everyone was spread out amongst large tables above which they’d draped canopies. If you’ve not been to the Vinyes Domènech, then it’s hard to describe its setting adequately as it’s been created in the back of a beautiful small valley outside of Capçanes (conveniently called, “La Vall” locally) with its vineyard splashed around the cellar.

As this was still before the thick of the summer, the canopies worked perfectly to abate the heat and oddly enough, we even had the threat of rain at various points. But it all just worked, with a fresh breeze passing across the terrace and plenty of wines served. 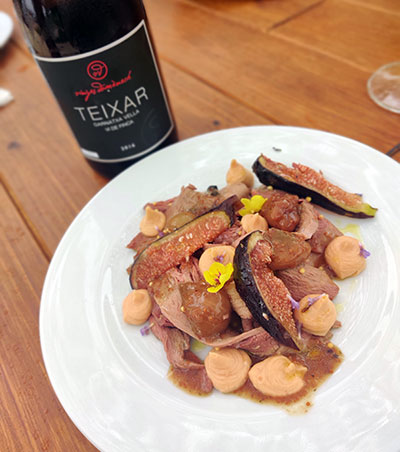 The best pairing was the Teixar 2016 with the “duck in roast beef style”. I’ve had the Teixar too many times to count and it’s a truly splendid red from DO Montsant, being the only vi de finca in the region as well as just an astounding articulation of Hairy Grenache, an oft-overlooked but also tasty mutation of the the Grenache variety.

For me the best dish on its own was the “vineyard roll”, a take on the traditional sushi roll, but vegetarian, using ingredients from the vineyard and wrapped in a grape leaf. It was outstanding in both how delicate it was along with being savory and flavorful.

There have been more of these lunches paired with wines throughout the summer and, for about 100€ which includes the wines, meals, and guided walk by Iolanda, it would be well-priced even at a restaurant, but out at the winery, in the middle of such vineyards, even more so.

If there has been any positive outcome of this horrible period, it’s been initiatives such as these which allow a more direct, intimate contact with the wines. While both memorable in terms of an outing, they give people a better sense for where the wine comes from, especially in this case of Vinyes Domenèch where there’s such an emphasis on what’s happening in the vineyard.

If you’re based in or near Catalunya, I’d recommend signing up for their club. Or, if just passing through on a visit, drop them a line to go see their unique property and taste their excellent wines.

Meal was at the invitation of the winery, Vinyes Domènech. Please read our Disclosures Policy