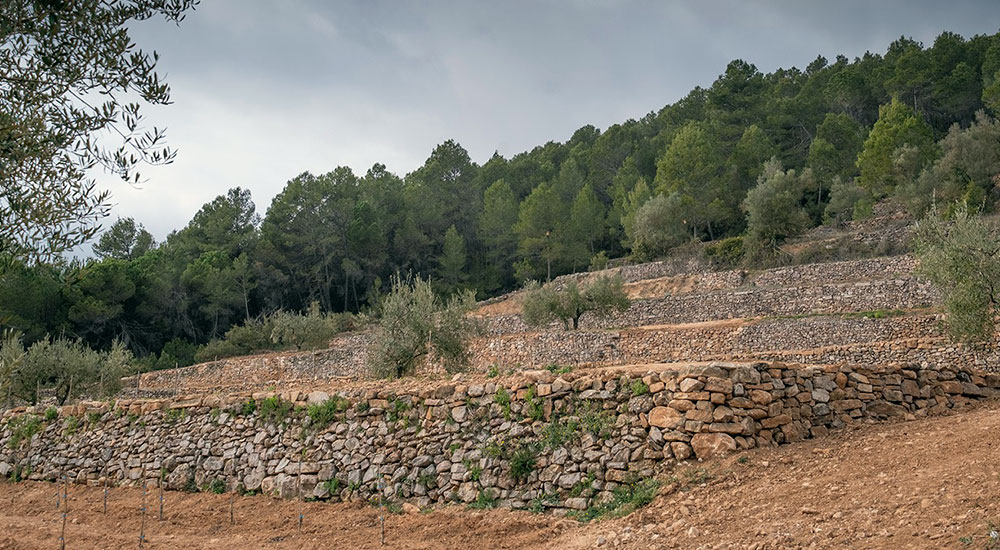 Spanish winemaking stalwart, Torres has announced an expansion of Forcada grape plantings near the village of la Llacuna in Alt Penedès. Embracing their overall plan to reintroduce this grape into production, they’ve planted the vines on recuperated stone terraces with bush-vine training in order to approximate what is assumed to be the pre-phylloxera methods of cultivation before this variety was abandoned and nearly disappeared.

This project, started by Miguel Torres Sr. and now largely under the guidance of Mireia Torres, has been pushing to recuperate varieties for some time and as I understand it, has been something like three decades in the making. To find old varieties, they advertised a phone number for people to call if on the off chance they encountered a vine on their property they didn’t recognize–old vineyards abound in the region. Most of those that were analyzed turned out to be known varieties but around 50 or so were unknown and were propagated in their experimental vineyard.

Over the years, that large group has culminated in six varieties that the winery has been working to get authorized as well as make commercial wine from. These are the reds, Garró, Moneu, Pirene, Querol, and Gonfaus and then the white, Forcada. It’s taken a great deal of time, but they’re slowly being integrated first into the EU registrar of grapes, then the Spanish list of permitted grapes and then finally into the DOs themselves. The good news is that DO Penedès now allows Forcada and Moneu in the wines.

The big question at this point would of course be, why go to all this trouble? To put it simply: variety. In Spain, there are something like 150 varieties allowed for use, but 10 of them comprise 85% of vineyard plantings. That’s not really the best method to hedge one’s viticulture bets whilst the climatic shit is hitting the fan.

Seasonal variance has been tough to deal with historical and you can see that wineries of yore weren’t stupid. Just look at the massive list of varieties allowed in the Douro or other, long-established quality regions like Châteauneuf-du-Pape. Field blends from oodles of different varieties weren’t people being clumsy in planting, they were security and a lot of people returning to the practice. In fact, the many of the best wines in my Douro Reds 2017 Report were noted as “field blends”.

Torres appears to have singled out Forcada for extra attention however. White grapes that ripen late are relatively rare in Catalunya given that historically, it wasn’t an ideal trait as you start flirting with rot as the rainy season nears towards the end of harvest. In fact, the only other one I can think of is, Escanyavella.

Late ripening is important for flavor development but what’s more important is that Forcada manages to preserve its acidity. The grape also holds excellent structure and a complex herbal and orchard fruit quality that will probably get more elaborate as the grape is grown more. Just to top it all off, it maintains low (for Iberia) alcohol at around 13% or possibly lower.

These are all pluses for both current market trends as well as climate trends, so it’s easy to see why they’ve put work into propagating and ultimately promoting this variety. But then there’s the location where they’ve planted it, which is in the Alt Penedès subregion of DO Penedès.

It’s easy to say that you’ve “seen Penedès” if you’ve passed down the AP-7 highway and made a stop at some cellars. The bulk of the grapes for the region are in this hotter, flatter part, primarily due to the implementation of mechanization post-phylloxera and it’s just easier to work. There are in actuality, two other Penedèses. One is the coastal mountains and then this more interior, higher part with vineyard altitudes reaching 700m often.

I was just up in this area with Parés Baltà the other day as, like Torres, they’re also working to plant in these abandoned terraces given that the climate and diurnal shift brings about some massively stonkin’ differences from what you see on the plain. Acidity is of course way up, but you also have varieties like Parellada which isn’t really good for much but bringing down alcohol totals in Cava, unless it’s grown up in the Alt Penedès area where it starts to get very interesting.

It makes a great deal of sense that Torres planted this Forcada vineyard up here as it will give them the chance to really study the grape over the coming years and see how it responds to being back in its original home after nearly being lost. One can only hope that in planting more of these ancestral varieties in ancestral locations we can somehow stay one step ahead of our man-made climate change problems that could easily portend the end of wine as we know it.

2 responses to “Torres brings Forcada to the forefront”