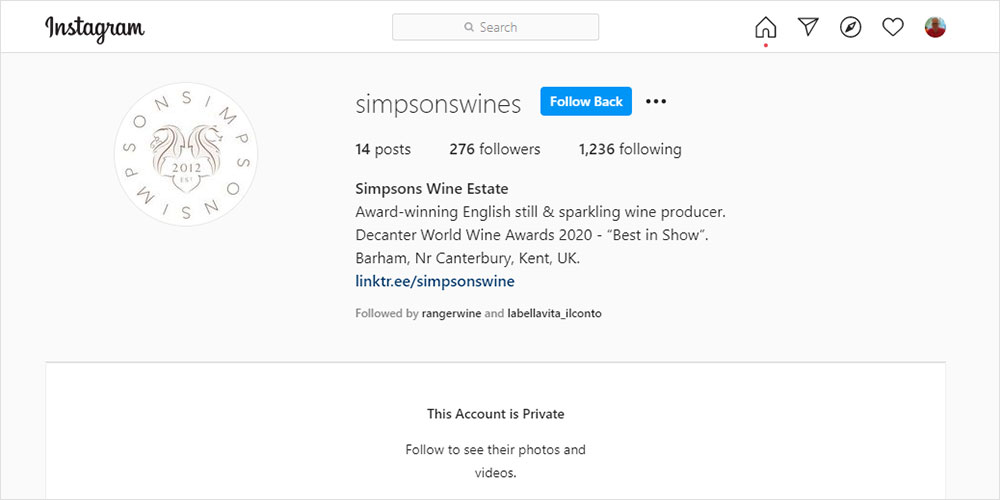 I’ve noticed a new scam sweeping across Instagram lately and for some reason, it appears to be very focused on the wine community. No, it’s not the whole “influencers” debate, but an actual, old school case of fraud that has manifested itself via the emergence of very convincing fake wine Instagram accounts.

On my Instagram account, I follow several thousand wine-related accounts which is why I started taking note of accounts that oddly start following me. I say “oddly” as I had to think for a minute and wonder, “I thought they were already following me, no?” and it was only after searching around that I discovered that yes, the actual account in question was indeed following me and this new one, was a fake.

For some reason I’ve seen this initially on accounts here in Spain (probably as those are the majority of whom I interact with) but it was this recent one for Simpsons Wine Estate in England that made me realize it’s a more widespread problem than I’d previously thought which is why I’m bringing attention to it.

Here’s Simpsons’s actual Instagram and here’s the fake (if suspended as of this writing, it’s the lead photo above.) Besides one being public and the other being private, it’s hard to spot the difference as everything has been perfectly copied from the real account, including the website link. The main item to note is that the real one is “simpsonswine” whereas the fake is “simpsonswines“. I saw another that was “torelloviticultors” and “torellovitticultors”.

So if the website is the same link as the original, how exactly are they enacting a scam? After all, a phony website would seem to be what they would spoof to lead you into some kind of Bitcoin or Nigerian prince inheritance scam.

I was fooled into following one of these accounts several weeks ago and here’s how it works. As soon as you follow them, they send you a DM with a message about how you’ve won a very expensive wine prize (I believe mine was a bottle of Petrus) and to claim it, you write back with all your personal details, bank account, etc. Obviously, that’s not going to go anywhere good if you do, so don’t do it!

As you can see, a great deal of work has gone into copying actual accounts in detailed form, so what are the markers that stand out?

If in doubt, search for the account in question (or look for it on their actual website) and more than likely, you’ll find out that you’re already following it and it follows you back.

What to do if you spot one?

Unfortunately, Instagram’s reporting mechanism is quite weak and you need a lot of responses before they’ll act on something. I’ve seen a number of these discovered some time back and they’re still around despite being reported, so take care!

The people behind this are really putting a massive amount of work into it and making it very tailored to the wine crowd. I could almost admire the effort if it weren’t energy being used for nefarious purposes.