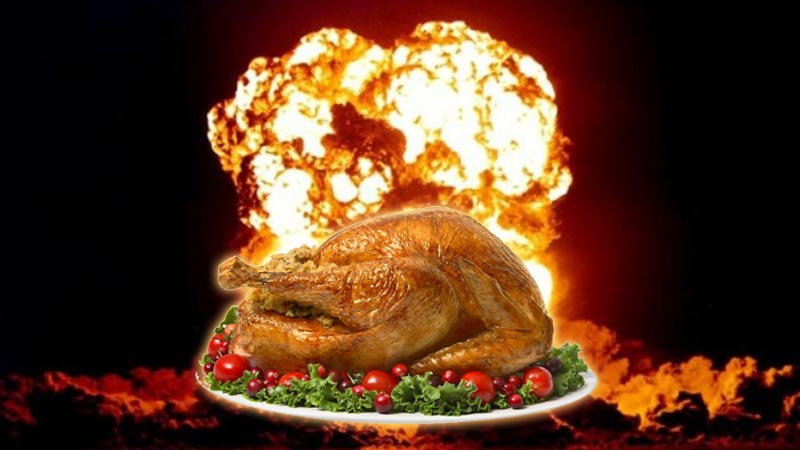 The definitive wine guide for Thanksgiving

My Great Uncle George had Thanksgiving food and drink pairing down pat: “Everything tastes better with Budweiser”. Straight shooting and always to the point, you’d never have known George was first generation Portuguese given his contentedness with America’s most generic of beers. We are of course awash in choice these days and for those who like wine, Thanksgiving (whether the American one next week or the Canadian one in October) can make one a bit crazy given how pliable a flavor profile turkey has and the vast, wildly-varying array of side dishes that come with it.

Now is the time of year when anyone writing about wine offers up wine choices for the holiday, which, given its theme of conspicuous consumption seems to be the most important holiday of the year to get right when it comes to the wine. I’ve never given such a list here but now having seen them year after year in wine publications, I’ve finally broken down and am curating a selection of wines for Turkey Day but with the intent of it being timeless so that I never have to do it ever again.

Turkey is buttery, Chardonnay can be buttery… and woody, just like that barbecued turkey you’re making because brining is soooo 2008. This style of wine is what happened when Californian winemakers decided to make wines “inspired by” Burgundian whites except on steroids so it pairs perfectly with a bird that looks like it’s been “juicin'”. The key to making this wine be a success, especially with the red wine drinkers you might have at your table, is to get a lot of it and keep it coming. Other Chardonnay possibilities include: New Zealand, Australia, South Africa, Chile, and yes, France. Just remember, get a lot of it. I think Clos du Bois (“The American Standard!”) runs 2x$20 specials this time of year.

The sensuous (hopefully moist) meat of turkey comes in varying shades or dark and light. It’s complex. It’s nuanced. It needs more than Budweiser–in theory. This kind of depth can only be matched by one of the wine world’s most evocative of grapes which should have seen the movie Sideways called, “Middle-Aged Pinot Love, Fuck Face”. Suggestions include wines from Oregon, California, Burgundy, Loire, South Africa, Australia, New Zealand, and basically anywhere else they produce Pinot Noir in the world except California’s Central Valley which is too hot. Actually, screw it. If you like your poetic wine boozy, toss the Central Valley in the list and even Spain. Why not? Just pick up a lot of it.

Italy’s highest-octane wine (minimum 14% ABV, prego!) is just what you need to see you through friends and family who are probably driving you crazy. Will it pair well with the dishes? Nah, not really but it sure will taste great and if nothing else, just buy a lot of it and keep shoving it at them so that if the turkey’s tryptophan doesn’t settle them in for a long winter’s nap, the booze will. Other options include: Californian Cabernet Sauvignon, Australian Shiraz, cheap Spanish Grenache, Californian Zinfandel, and Argentinean Malbec. If in doubt, any label with an animal on it will do you fine. Again, just pick up a lot of it. Thanksgiving is a four day weekend after all!

Thanksgiving has too many damned dishes to make pairing easy so why not pour the drink that pairs with everything? And what is that? Sherry. Yes, Sherry but not the über sweet dessert ones nor the hideous “blends” that still plague the market. I’m talking about Fino, Manzanilla, Amontillado, or even Palo Cortado. If all this is new to you, block out 2-3 hours on your calendar, walk into your local wine shop, make a beeline for the most bearded, tattooed guy working in there sipping on Riesling and ask him about their Dry Sherries. Just remember to not tell anyone what it is when you pour it, although if they insist really hard, tell them it’s Pinot Blanc de Noir and make sure you bought a lot of it.

Honestly, what’s the point of these lists? There’s no way one wine will pair with light and dark meat of turkey, fat-laced gravy potatoes, yams, cranberry sauce, salad, stuffing, pumpkin pie and who knows what else. So just give up, buy whatever you like to drink and a lot of it. Think you’ve bought enough? No, you haven’t. Get back into the shop, buy some more, and you’ll have the best Thanksgiving that no one will ever remember, except my Great Uncle George who will remind you at the next Thanksgiving that the Amarone was a bad call and you should have just bought more Budweiser.