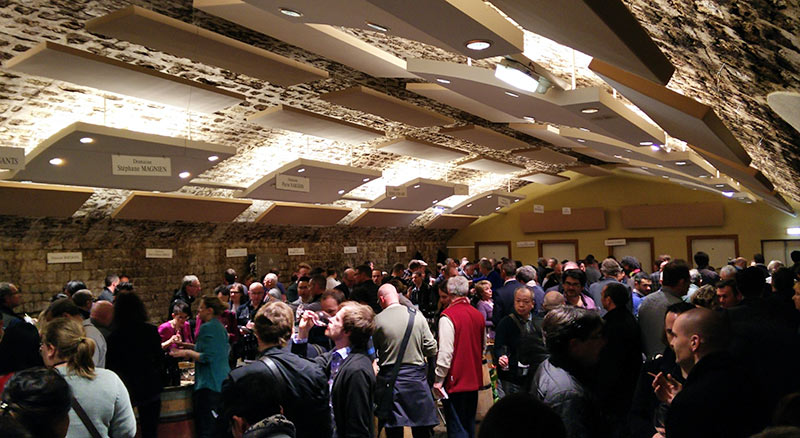 The tasting at Nuits St. George

It may be different for others but I suppose due to the general price of the wines and the limited production, I’ve always thought of Burgundy as something of an enigma. Sure, wine is wine but the fact most of us can’t regularly afford to drink wines that are 100€ a bottle or more, it lends an air of desire to a wine region no matter how unaffected by such things you may or may not be. Naturally, people constantly waxing poetically about the icon domaines such as Romanée Conti doesn’t dissuade the mystique either.

So, it was a small promise to myself that upon passing Level 2 of the Court of Master Sommeliers that I would kick myself in the ass and make a visit to Burgundy. Well, last year I finally did pass that rather difficult test and so I got to thinking about when to visit. Beaune is about 1,000km from where I live in Priorat so it wasn’t going to be a quick trip. It turned out that the Councours de Lyon was happening the week after and it seemed like a good excuse to go up a little before, check out what Burgundy was about in person, then go back to judge and ultimately home, all making use of the high speed trains.

When asking my friend, Marko Kovač of Label Grand about some domaines he’d recommend, he said, “When are you going?” I told him to which he replied, “Dude, go a few days earlier and take advantage of Grand Jours de Bourgogne.” His advice it turned out, was sound.

While I live in Priorat and am accustomed to it via everyday life and giving private wine tours, those who don’t know Burgundy are unaware that it is incredibly difficult to visit wineries in the region. Other regions in France generally have an open doors policy and free tastings. Whether it’s due to the generally small production of most Burgundy domaines or just because they don’t have to, trying to drop in for a tasting in the region, especially in places like the most famous Côte d’Or is essentially impossible.

Thus enters Grands Jours, a five day period at the end of March, every two years where you can taste literally thousands of the wines made ranging from the entry level Bourgogne wines that are as low as 7€ a bottle up to Grand Crus that can be several hundred euros. This however is an event not at all open to the public. You need to be a member of the trade and be able to prove as much.

I applied to attend as press and despite a relatively decent wine journalism resumé, they came back at me with, “It seems you mostly write about Spanish wines. Why would you want to attend?” Thus, I had to prove a bit more of my worth via my future intentions and thus they let me in. They don’t let in a lot of press to the event. Of the 2,500 people from 56 countries attending, 47% are importers or wine shops, 23% restaurateurs or sommeliers (you need to actively be a sommelier at a restaurant to attend), and then 6% journalists which means about 150 in total, of which many were French.

Despite this small number, they had a lovely team dedicated to receiving we press folks and did a great job of orienting us around. I don’t know why, but everyone seemed shocked it was my first time at the event. Quite honestly, I didn’t feel that my professional wine level would have been sufficient back in 2014 to have attended without feeling like an asshole. As I found out, there are others who don’t let this stop them, but they should give pause as indeed, if you don’t come already understanding Burgundy on paper, you’re going to look quite foolish tasting alongside very experienced journalists, Masters of Wine, and Master Sommeliers but I digress.

The five days of the event each take place in a different space and they try to have the tastings within the region that people are tasting. This meant driving 140km to Chablis the first day just after having arrived from Spain the day before. That sucked but the domaines in Chablis made it worth the trip with an excellent tasting, quite good lunch, and a very nice book. The other days, they had a shuttle network set up to take people from Beaune (the main town in Burgundy) to the various tastings.

But each day provided something different and I’ll elaborate on them in separate articles as well as high points given that it’s just far too much to cover here. I haven’t fully counted the wines I tasted but it was more than 700 wines during the five days which is why it’s taken so long for me to get around to writing about it as collating all that data from a stack of booklets is slow going. Then of course there were the side events in the evenings which made for very long and intense days. It was all incredibly fascinating despite the fact that 99% of what you’re tasting is either a red from Pinot Noir or a white from Chardonnay.

Prior to getting in to more detailed articles, the big question for anyone reading this would probably be, “I, like you didn’t know much about this event. Is it worth going to the 2018 edition?” To which I would reply, “Most definitely.” As Marko told me, it’s really the only way to be able to taste a huge swath of Burgundy with great ease in one place. There is a downside to this in that many, many other people are there with you doing the same thing and so the popular tastings like Vosne Romanée at Clos Vougoet are shoulder to shoulder. I also found out, go with a little crap strapped on to you as possible. I started out with a backpack on the first day and quickly got rid of it as I found myself to be ‘that guy’. Deep pockets were my friend.

When staying in the region, book as early as you can. Those mighty convenient shuttles all radiate from Beaune and so you want to be there ideally, unless you want to drive around in a car and battle parking in every single village which I sure as hell didn’t want to do, but some really were in to the idea. I laughed at them as they hiked in a kilometer and we passed them in the shuttle to arrive at the front door.

In the end, I met a number of new people that I hope to stay in contact with and I have a much better understanding of Burgundy than what I had read in books or seen on maps. For instance, there are many, many well-priced wines from Burgundy (by this I mean less than 20€) that no one ever hears of all it’s all about the marquee Grand Crus. But more than just tasting the wines and seeing the villages, there was also enjoying the local cuisine which is what goes hand in hand with the wines. That’s all a win and while I probably wouldn’t try to fit so much in to this trip the next time (I stopped by Lyon, Côte Rotie, Condrieu, Hermitage, and Châteauneuf on the way back) I would definitely go again and try to schedule some visits beforehand to get even deeper into Burgundy.