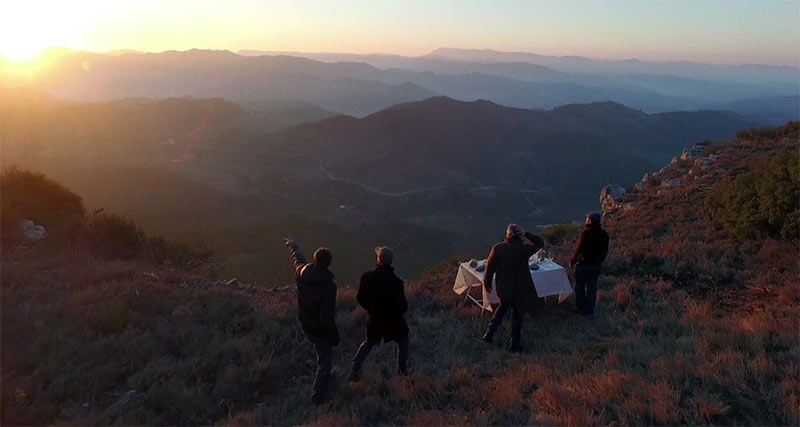 The opening night of the Most Festival saw the premiere of, “Priorat” a documentary created to tell the story of the rebirth of a wine region that nearly faded in to the sands of time. It was shot during the harvest of the fall of 2015 and features interviews with all the modern “Clos” owners, as well as a number of the people around the region, international wine figures, and then yours truly, however you want to categorize me and my “talking head” role that I played. Watch the trailer (and the film) if you’d like to learn a bit more.

If you want the gist of the story, you can read it here or more thoroughly in the Priorat book but what this film does quite well is to animate the history and fully show the gorgeous landscapes where Priorat resides. That in and of itself is stunning and worth a watch.

It also helps to teach more about the history of this region and get a taste for what makes it special, especially by interviewing some of the peasants (who also happen to be my neighbors) who had born witness to the massive changes of the last three decades. I think that no matter anyone’s level with wine, it’s an enjoyable film to watch but my only criticism before getting into a more geeky side of things is that the last 10 minutes of the film is a bit meandering with random thoughts and statements by the protagonists. Given that it’s 60 minutes in length, it wouldn’t surprise me to know that there is also a 50 minute version that was cut to run on broadcast television and is a bit tighter.

Okay, so you can take the above as essentially, “Yes, you should definitely watch it if you get the chance.” and what follows are my opinions based upon writing about and studying the region for nearly half a decade now.

The primary issue is one that I have with many journalists and documentarians around the world, but seem to run rampant in Spain in that the filmmakers came at this project with a fixed idea that they weren’t willing to be flexible about as the story unfolded in front of them. This was unfortunately combined with not really haven’t any knowledge of the region or having been there as one of the producers admitted.

Thus, while it was great to see some time given to Ricard Rofes of Cellers de Scala Dei, the entire narrative of the 1974 Cartoixa wine from the cellar was cut out of the story. This is a rather grand error as while René and his band of cohorts did indeed bring international attention to Priorat starting in the early 1990s, Scala Dei was the winery that showed those who happened upon the Cartoixa the quality of wine that could be made. It’s a shame that Asunción Peyra isn’t with us today as she set in motion a great wealth of the modern history of this region.

The inflexibility aspect comes back again as, when I was being interviewed it became clear that they had the premise, “Robert Parker made Priorat” embedded in the narrative that they’d designed. I had actually spoken a bit to the contrary about that as indeed, Parker wrote favorably of the region and it helped, but so did farsighted importers like Eric Solomon. It’s also important to note that Parker has been and will probably always be most well-known for his reviews of Bordeaux and Napa Valley and while some light shown towards Priorat didn’t hurt, the region was coming of age at a time when wine drinkers were much more open to wines from Spain and thus, searching them out. So to say that the region owes its fame to Robert Parker is a bit of a reach. Needless to say my and perhaps the comments of others were left out as they were inconvenient.

Another aspect that I felt was lacking from the film was the future. Wine is not a single event and no matter how much you’d like to rest, the harvests keep coming. The reason these five people of the Clos Gang are still making wine is because they’re all here during the harvest and each year is a new adventure. There was almost no mention of the 2008-09 Financial Crisis except for a tiny little bit they let slip through from me and then a couple of bits in reference from Dominik Huber of Terroir al Límit. This Crisis was a horrid time for Spain and especially Priorat.

They export around 85% of their total production outside the country and their sales channels, even for stable cellars, fully collapsed. I assume that they must not have had a lot of footage about this as it was like a second phylloxera with a number of cellars shuttering or being sold during this time. Beyond this, there wasn’t any looking to what the future of the region holds as it just somewhat ended with shots of some of the local peasants from the older generation and a feeling of “And they all lived happily ever after” which in Priorat, ain’t ever the case. The terraces and slopes are pretty but rough as hell to work.

On a more personal note, it was a pretty surreal experience to watch this. While I’ve seen myself on the screen before, this was much more close to home as it is my home and seeing myself as well as all these people I know very well talking about the place and then aerial, cinematic shots was a strange sensation. It assume it was even more so for René Barbier who was watching the film the same night I was. All I can say is that it’s a sensation probably best dealt with by opening a bottle from Priorat.

The tastes of Priorat