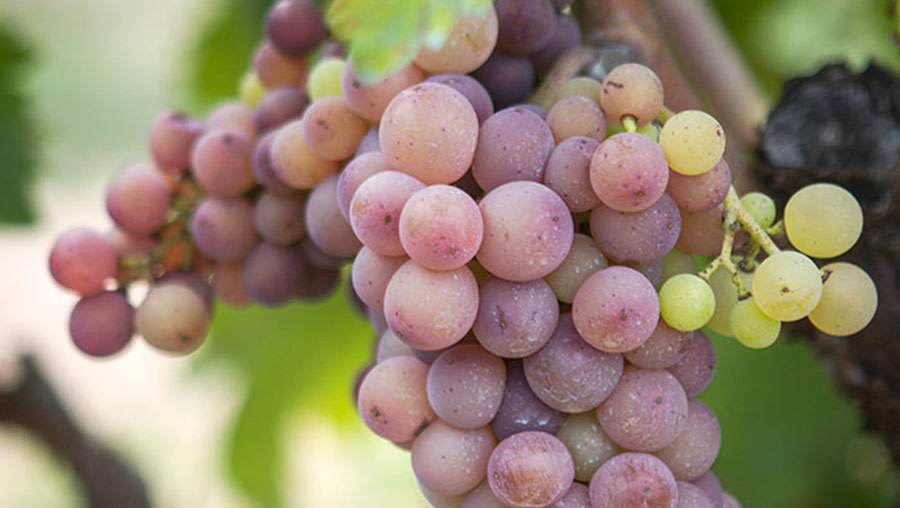 A taste of Lledoner Roig

As is the case with many old European wine grapes, Grenache Gris has a number of synonyms but one of the names you very rarely hear is “Lledoner Roig”. By no means is this due to ignorance on the wine drinking public’s part as it has much more to do with how the grape has been regarded by the regional winemakers who use this old name.

It’s admittedly a grape that’s generally on the decline. According to the former director of the viticulture laboratory in Roussillon, Pierre Torrès, that region at the Spanish border once lay claim to some 5,000ha in 1958 but by 2012, it had dwindled to 900ha. In Catalonia, the decline was much more marked and now there are all of 61ha in total with 60 of those in the region of Empordà. Of course as noted by Anna Espelt of Celler Espelt, there are undoubtedly more unrecorded vines of Lledoner Roig out there than these numbers let on as these vines are found interspersed with old Carignan vines. A major player in international wine this grape is not, but it has had more attention thrown its way recently due to the renewed interest in cultivating local, “native” grapes.

Within the auspices of DO Empordà the winemakers typically use this name to refer to the old, bush vines in the vineyards. Ms. Espelt said that new plantings, where found, are typically called Garnatxa Grisa as something of a way to distinguish these newer clones that are French in origin. This nomenclature isn’t always adhered to and the terms are often used interchangeably.

There are precious few vineyards which are comprised of only Lledoner Roig. As the story more often went, when one of the Carignan vines would die, peasants of yore would plant one of these Lledoner Roig vines in its place as it’s a vigorous grape. Historically these grapes were then used in the quite exquisite dessert wines of Empordà but several cellars, including Espelt and Cellers d’en Guilla are now focusing on single varietal dry wines from the grape. The dessert wines most gratefully persist however.

A tasting organized by local wine connoisseurs, Jaume Pallàs and Ramon Roset was held in May at Espelt allowing the various winemakers in Empordà to showcase the new wines they’re making with this grape. The ten wines of the tasting showed that the grape is still something of a mystery. Styles were all over the map and while most chose to make a white wine from this pink grape (“roig” means “reddish” or “ruddy” in Catalan and is often used to describe sunburnt tourists), there were two rosés in the crowd as well. It makes it hard to generalize how the grape “should” taste although most wines showed fresh citric notes and were able to stand up to barrel or amphora aging. The question of whether it’s better when blended like the Roussillon wineries often do by pairing it with Macabeu is an answer that people should seek out by tasting the wine on its own.

Is there a future for this grape in this region? At this point it’s most definitely not going to go away as it has silently been part of the winemaking for nearly a century in some of the oldest vineyards. The real question for the winemakers is to come to some form of consensus as to what they’re looking for as a group. This is tied in to the need to show to those who come to the region thinking it’s just sun and seafood that there is also a vibrant, adventurous winemaking scene to discover as well in Costa Brava & Empordà.

As is the case with highly finite comparative tastings, I’ve used the 20 point system instead of the three star system typically found.

Celler La Vinyeta, Microví Torrats 2013
100% Lledoner Roig
Old vines of 90 years near the village of Espolla on sedimentary soils. Partial fermentation in stainless steel and then finished in French oak of 300L. Wondrously profound aromatically with pronounced mineral notes, light vanilla, and a lovely tinge of rose petals. Floats on the palate with a lingering acidity. 16.5 14% alcohol

Vinyes d’Olivardots, V d’O 7.13 2013
100% Lledoner Roig
From a 91 year-old vineyard in Capmany that’s a mix of pebbles, silt, and sand. Fermented in one single 500L barrel of new French oak. Straw color in the glass with pronounced minerality and grapefruit aromas as well as a touch of sweet caramel. Balanced, full, and of medium plus body that keeps the minerality as well as new oak notes in check. 16.5 14.5%

Espelt Viticultors, Lledoner Roig 2014
100% Lledoner Roig
From old vines in Rabós, fermented in 500L French oak barrels with ambient yeasts. Clear and bright in color. Bold citric notes of grapefruit and lime peel. Larger bodied yet able to stay fresh and lively with minor toasted notes of the oak in the finish. 16 13.25% alcohol

Cellers d’en Guilla, Edith 2013
100% Lledoner Roig
Only two 300L oak barrels were made. Bright and alive in the glass with potent minerality, citric notes of lemon peel, and a hint of caramel. Round across the palate with the citric elements more pronounced and a lingering, crisp finish. 16 14.5%

Cooperativa de Garriguella, Gerisena Rosat 2014
100% Lledoner Roig
Grapes from the edge of the Empordà by the Alberes foothills that are aged in stainless steel tanks. A touch of yeastiness along with apricot peel, peach, and summer blossoms. Quite structured and full in the mouth but falls off quite quickly in the finish. 15 12.5% alcohol

Còsmic Vinyaters d’Agullana, Confiança 2014
100% Lledoner Roig
From 60 year-old organic vineyards in the northern village of Agullana on sandy granite soils. Full, natural vinification with ambient yeasts in 200L clay amphorae, no sulphites added. Cloudy in the glass with celery and radish notes alongside a dash of minerality. Medium acidity with the vegetal notes sticking through the finish. 15 12.5% alcohol

Vinyes dels Aspres, Oriol dels Aspres 2014
100% Lledoner Roig
From 38 year-old vineyards in the village of Cantallops that are Grenache Gris clones from Roussillon, aged in stainless steel. Light hint of brioche, granite minerality, stone fruit, and some minor lime hints. The flavors generally mimic the aromas with a surprising burst of lactic notes in the finish. 15 14.5% alcohol

Celler Mas Llunes, 13.02 Singulars de Mas Llunes 2013
100% Lledoner Roig
An experimental wine of just 800 bottles made with a selection of grapes from a 70 year-old vineyard in the village of Fontanilles that sits on slate soils. Touch metallic with minor apricot and old cream notes in the nose. Doesn’t hold much structure, has a short finish, and stays generally closed. 13.5 14% alcohol