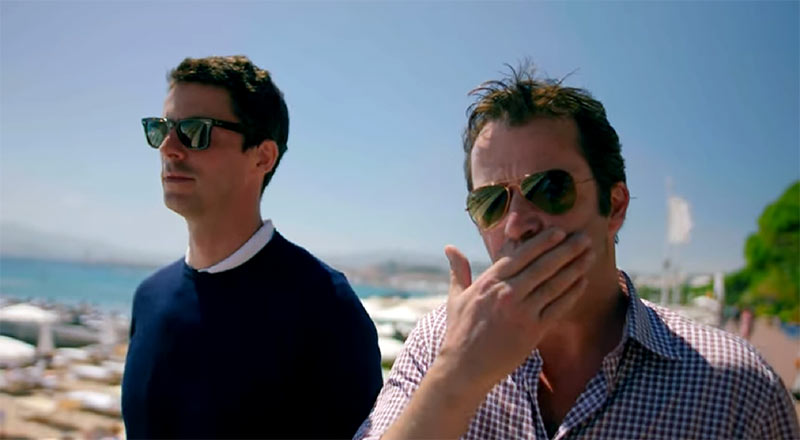 Carrying on after the success of the first iteration of The Wine Show, the team got back together two years later to produce Season 2 that released to a much larger audience on Channel 5 in the UK–although you’ll have to take others words on that as I’ve no idea what’s what on the telly up there. But, the main takeaway is: if you’re a casual wine drinker and were a fan of the first series, there’s no reason why you wouldn’t be a fan of the second series. If however you’re working in the professional end of wine and/or are an avid aficionado, this probably isn’t the series for you.

I certainly don’t mean that second bit as a jab as there’s most definitely a place for this series given that the truly nerdy of the wine world occupy a dense, tome-encrusted sphere that’s highly impenetrable and generally boring to most people who just want to drink the stuff. The Wine Show is fun, light, and at the same time, informative. Those who casually dabble in wine or find themselves buying the same wine every time they’re picking what to drink would do very well to watch this series as they talk about accessible regions and make wine suggestions that most anyone in a regular wine market will be able to find.

All of that said, in terms of a deeper critique, I’d have to say this series felt a bit more rushed than the first one. As Matthew Rhys was busy during the filming, he was subjugated to a couple of quick wine gizmo segments that very much feel like they were shot in one day. This is unfortunate as Rhys was probably my favorite element of the first series. He’s a mighty funny Welshman and I couldn’t tell how much of the series was adlibbed by him or actually scripted (there is indeed a script btw) and that was great as it gave a bouncy, “Oh shit, whatever, I’m just enjoying wine when I never did before!” kind of feel. In short, Rhys was 99% of people in the world when confronted with WINE. James Purefoy does well in the series but him and Goode get a bit “Englishy” at points and it can lend a stuffy atmosphere to the beverage that Rhys really helped to relieve. Yes, I’m saying a Welshman can indeed deflate a room–rapidly.

In terms of casting, Joe Fattorini continues his run as a great wine communicator. This is no easy chore and he’s able to do it seemingly without effort. Of course, once I started following his Twitter, I saw that Joe is actually a great deal more witty than he seems on the show even and it seems that the script to some extent keeps him a bit contained. Maybe that’s good for him lest the sarcasm get the better of the show, but if you don’t follow his Twitter, I’d give it a definite look.

On that note, I think my main gripe is that they had Jancis Robinson appear on this episode to take over the “All Approving Wine Guru” spot from Joe this time round. I feel this was really a mistake but not due to thinking Jancis wasn’t up to the task; quite the contrary. Jancis is exceedingly quick, funny, and holds a wealth of wine knowledge behind her stylish spectacles that very few can compete with. The scripted aspect to the show, along with seeming to film this in one day really cut a lot of this short and I think she was vastly underused. It was also sorta weird to have Joe in all these scenes as it made it seem like he was there to give approval to her choices when it should have been the other way round. I’m not sure if future seasons might go this route but I hope they take a look at this and see how it’s possible to better use the top wine talent that’s out there.

The last quibble I have is really about any video of wine stuffz these days in that there is this massive trend to take long, sunset-lit slow motion shots of vines and wineries. The Wine Show doesn’t use it to an exhaustive extent, but I think any bit of it really wears on me from having watched the rather pointless “Somm 2” which was pretty much just these shots and it got very old. I’d much rather see some chat with a quirky winemaker (or again, Matthew Rhys cracking jokes) than vines flowing in the breeze. I am however spoiled on this front as I have vines flowing in the breeze out my front door so maybe most in the world appreciate this?

So to close, if you want to see more about wine in The Wine Show style from the first season, this is most definitely worth a look. Also worth a look if you enjoy James Purefoy on a horse which is more magical than any sunlit vineyard you think you can imagine, breeze or not.