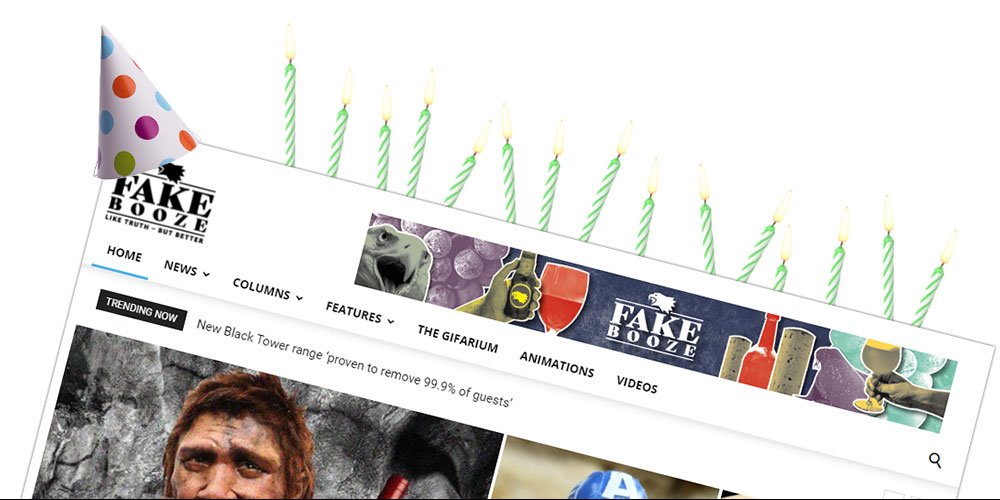 A fake anniversary for Fake Booze

A few days back, Jim Budd posted a round up of his favorite articles from the new satirical drinks site, Fake Booze. I’d definitely add even a few more in there as the humor valves have been opened quite wide since this site launched with a great deal of content that takes on all that is dumb, pompous, or needlessly stupid in the drinks works.

Looking at the Twitter account last week, I noticed that it was started back in May of 2020. Thinking I had a scoop, I reached out to them to see if they wanted to do an interview for their one-year anniversary. As it turns out, the site launched in September of 2020 so I’m a touch early, but decided to roll with it anyways as what better manner to celebrate the website’s anniversary than with a fake one?

For those who are like me and aren’t up on all the ins and outs of the UK drinks scene, the “they” behind the site is actually Chris Losh, a very established drinks writer based in London. He’s had a column in Just Drinks for 20 years and was editing the magazine, Imbibe, but had left prior to it sadly going defunct last year. In an “exclusive” interview with Chris via phone, we chatted about all things Fake as well as Booze and dug into the reasons why he started up this new site which he rightly calls, “a niche within a niche”.

So, we’re in the middle of a pandemic and you had a lightening rod moment that instead of starting a podcast, you’d start this site? Or how exactly did this come about?

When lockdown happened, freelancing stopped. After a minor panic of tumbleweed in the inbox, I thought about what to do next. I’d had this project in my head for awhile, but one lacks the time to make something like this happen. Then, with yawning gaps in the diary, I figured, let’s give it a go. It was a good opportunity to build a website and see what happens.

I know very well the inanity of the drinks world, even if you keep social media out of the conversation, but what was it specifically that made you want to get behind this?

It’s hard to get excited by the repetition that keeps coming up in drinks publications and Fake Booze is something of a reaction against that. If there’s anything that’s mildly pissed you off over the last 20 years, you suddenly have a tool with a site like this.

What’s your background in the humor department? Were you the class clown in school?

Yes, I was the class joker. Also the one who would get into too much trouble for not self-editing. Satire doesn’t work so well within an educational framework. Nor, in fact, a corporate one, so it’s a relief to not have a company above me! I’ve written humorous columns on all kinds of stuff for years – some of it published, some of it not. At least on my own website I get to stick up anything I want!

It wasn’t until some time after Fake Booze started that I found out you were behind the website as you don’t make any reference to yourself on the site. I assume this was intentional?

I like the idea that there’s a brand of Fake Booze having a go at something and it’s a separate entity from me or it’s more like me on steroids and it has its own voice. I do have contributors but I work over the story to maintain the voice. It’s definitely me, but my name isn’t anywhere near the content even though I write about 90% of it.

The name I assume is a direct reference to “fake news”?

Completely. When I launched it Trump was at his malignant best and it came from this. I did have a few others as contenders, but I went with this.

So once you got all the branding in order and launched the site, was it an overnight success?

I pressed the button in September of last year and it was pretty slow to go as I’ve got no marketing money behind it. Probably took about four or five months to really gain a bit of traction and gain this “niche within a niche”.

Now that it’s been up, have you seen any pattern as to what’s been popular?

No. None whatsoever. It’s a complete mystery as to why certain articles take off and others don’t.

I know what you mean, I wrote an article on fake celebrity wines which I quite liked but seemingly nobody read. So every time there’s a new celebrity-related wine I try to promote it again, but there’s generally nothing, no uptake.

Exactly. When California was going through all these disasters, I wrote that story about the zombie apocalypse in the vineyards and I loved it. I put it out there and nothing. Every time a big story in the US comes out, I’ve pushed it some more and still, nothing.

Then you have the Pinot Grigio MWs bit which went absolutely ballistic even though I didn’t think it was that amazing. Who knows what makes people tick.

The piece about wine judges’ dads, which been one my favorites to date, seems to have gotten good traction?

That was one of those ones that felt like it was going to do well and it did. It takes the competition and reduces it to the level of the playground. It was an obvious target but was never looked at.

Is anything off limits?

It shouldn’t be, but I do self edit from time to time as well as show pieces to people just to get some feedback on that side of things. Still, you can upset people, like the French ’emergency’ bottle sizes was probably a bit too soon given everything they’re dealing with.

Then there was the one when Steven Spurrier died that I didn’t feel was edgy in the least and even ran pass several people who knew him just to check myself and they confirmed that it all seemed good.

Once published, some people were really offended by the article, saying I should take it down. There are always some people out there very willing to get outraged, there are no shades of gray on things. I don’t get a lot of criticism, but I did on that. It’s interesting that it’s the one that people did get upset about.

But that’s an issue as no matter how many people you run something by, there are a lot of really hyper-sentive people or those with self-serving motives, and so many of them are on Twitter. Are you worried that despite the checks, a shitpiling could still happen?

The nature of Fake Booze is that it’s usually attacking with an ironically-raised eyebrow, rather than claws unsheathed. The idea is to point out something ridiculous rather than try to destroy it. It’s laughing at the fact that the emperor has no clothes, rather than saying “I hate the emperor I wish he would fuck off and die”.

You always run the risk of pissing people off doing satire, but if I’ve checked pieces that I think are sensitive, and they’ve come back ‘clean’ – and as long as a piece is punching up, not down, I can live with occasionally annoying people.

I see that in getting better known, you’re getting tagged often whenever there’s something Fake Booze Worthy out there. Are you getting more sources sent to you now?

There’s a growing number of people from the public sending in ideas. Sometimes they don’t have enough to them to really make a story. Others are sending in press releases. Overall I’m getting a mixture of interesting things and it’s definitely growing. A global malevolence is important as I don’t want the site to be too full of “in” jokes.

It’s important to note that all the people in the articles are always fictional. I create these characters so that I’m not making overt references to actual people and it doesn’t spoil the story if you don’t know who the people are. I have a generic supermarket called Price Fixer and there’s a universe being created around it. There’s a cast of characters that are starting to appear over and over again like one’s own little sour puppet show.

So I suppose the big issue gets to be that this is all fun and giggles, until you need to pay the bills. How long do you think you can keep at it and how will it need to support itself?

The Fake Booze Patreon is now at the stage where I can work for free for the website as it covers its basic costs, but it’s pretty far from the stage where it can provide any kind of a salary.

If I closed it down people might say, “Oh, I really liked it, why did you close it down?” Well, did you put any money into it?

Everything is all about content and a huge amount of work, but where’s the money coming from? Until people start to think, “I admit this is worth paying £1 each week for the laughter it gives”, then we won’t get to somewhere where it funds itself. Essentially, am I better or worse than a Starbucks latte?

It’s more work than I thought when I took it on and now it’s quite a lot of work in the evenings. It takes up about 2-3 days of work around which I need to have a working week to subsidize it.

It’s always the big step in terms of content to see if people can translate “enjoyment” into holding “value”. For those still on the fence and wanting to see how it plays out, how can they follow along?

There’s the free subscription to the weekly newsletter, so you don’t have to go on the site every week. Also, if there are any eccentric millionaires out there looking for a pet project, I’m all over that.

I’ll definitely let you know if I hear of any! Thanks for you time and work to date. Here’s looking forward to the actual anniversary in September!

5 responses to “A fake anniversary for Fake Booze”