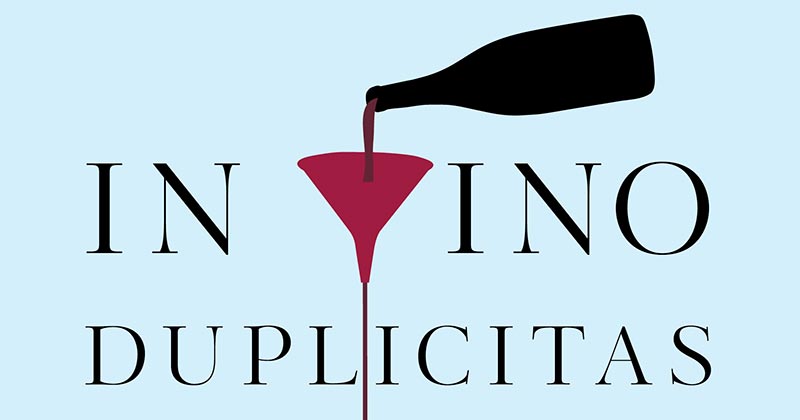 The entire Rudy Kurniawan affair was sordid and I’ve read countless articles about the story since it broke years and years ago. Despite this, Peter Hellman’s new book, “In Vino Duplicitas” brought out many bits and other items that I’d never known before. All told, the book is the most comprehensive and detailed account of the affair which I assume will eventually make it the final reference on the subject.

Hellman does a great job of unfolding a long and detailed story. I don’t envy his task in this and it’s only someone with years of writing experience, who had been following the story for so long that could have pulled this off. His tone and writing throughout the book was evenhanded, clear, concise, and able to bring to light many aspects of the wine world that are in the dark for many people. Additionally at a time when you have a rash of wine books such as “Wine Folly” which is fact-adverse or then “Cork Dork” which is a disorganized, dizzying mess that explains nothing, having a book like this come along where the author’s voice is clear and the research in-depth and meticulous, it’s a welcome breath of fresh air.

One of the big issues in dealing with such a subject is that a) most people don’t care and b) most people, even if they do care, don’t have the time to dig into such a vast subject. This is largely how Kurniawan got away with his crime as even those with the money to collect such wines simply can’t know everything as they’ve empires to run in order to pay for said wines. Hellman at times uses the very apt mechanism of telling the story through the voices of those that can explain it. I refer to this as the “Riker Voice” which, for anyone who has watched “Star Trek: The Next Generation”, you’ll be familiar with the typical foil of having the first officer of the star ship be the one to ask, “Sorry, I’m not up on my quantum singularity physics, can you explain that to me?” About midway through the book, this voice often becomes the main prosecutor on the case Jason Hernández who is himself a wine lover but has to explain what has happened in this crime to a jury that is most definitely not.

But I think one of my biggest issues with the text came with the mention of Maureen Downey about halfway through. She is mentioned in passing in one sentence, then mention similarly again, and only towards the end does she get three sentences attributed to her. The reason I bring this up is that Downey is a specialist in wine fraud and was one of the most vocal people from the beginning of this affair. She was largely ignored by these collectors as they obviously didn’t want to hear this when Kurniawan was splashing out so much good wine on them, but it needs to be said, also due to her being a woman. Thankfully in the documentary “Sour Grapes” she sees a great deal more presence.

It was this small crack that opened up the fact that the book is seriously, seriously lacking in women in the story. Yes, Kurniawan is a guy and the group, 12 Angry Men are mostly all guys, and both the lead prosecutor and FBI agent are men, but at the same time, women did exist in this story as shown by the brief mention of Downey. There are other aspects that bothered me as well wherein the wives of these collectors simply don’t exist other than in passing remarks of “Oh, my wife is gonna kill me for spending so much on wine”. I could maybe go along with this as this is some alpha male world for the most part but there are plenty of women in the professional side of wine (especially the auction houses) that have failed to arrive to these pages.

Then there’s Kurniawan’s mother who is little more than an empty vessel throughout the book to the point where it seems she shouldn’t have even been included if to be portrayed as such. It’s only in a very disjointed and rambling Epilogue that you learn a great deal more about her and the fact that she’s potentially a central character in all of this due to unknown amounts of wealth and family ties back in Indonesia. I’m really not sure why this is just splashed in at the end unless the author felt it would somehow distract from the narrative of these wine dudes.

In closing, it’s definitely the most detailed account on the case out there and I recommend it for those wanting all the nitty gritty. But for those looking to take in a shorter, more digestible format, the documentary or then several other long-form articles might be more up your alley, especially as, whether the author intended or not, there is a failing or lack of desire to flesh out a number of key characters who all seem to be women.

One response to “A book review of “In Vino Duplicitas””