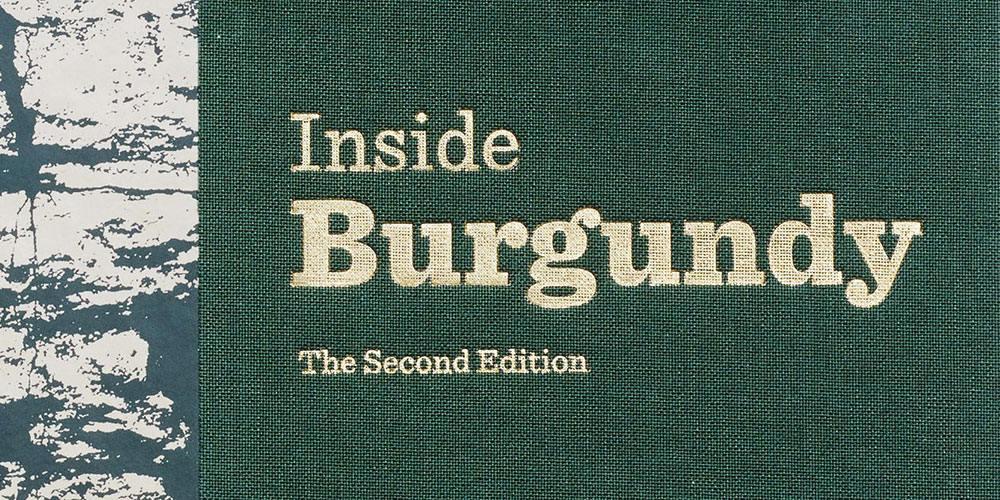 “Hotly anticipated” is a phrase that’s more than a bit overused in the world of wine books. I mean, they’re books and they’re about wine. We’re not talking about Harry Potter sequels here.

But if there’s one book that this phrase could be applied to, then it’s the second edition of “Inside Burgundy“. I mean, the first edition did win the English, André Simon Award after all.

It came out in September of this year and was written by Master of Wine, Jasper Morris and published by Berry Brothers & Rudd and Segrave Foulkes. If you’re unfamiliar with Jasper’s CV, he’s been working in wine since 1979 and is an expert on Bourgogne (*), having worked as the leading importer of the wines to the UK since the 1990s. He gained the Master of Wine in 1985 and in 2018, he launched Inside Burgundy. Needless to say, he knows the region.

When one sets out to understand wine, one needs to taste some of the best wines there are to be able to quantify the beverage. It’s the same here in that this tome sets the bar for what all wine books should strive for. Yes, it’s about a world-renowned region. Yes, it’s written by someone with decades of experience in said region. But this is exactly how it should be when creating what is, the definitive book about a specific wine region.

What’s beautiful about this book (in addition to the layout and overall physical presentation) is that at no point does Jasper speak down to the reader. One reading a book on a region such as Bourgogne would probably have a decent understanding of wine, but at the same time, this isn’t assumed. The text it clear and straightforward but never boring nor too technical with plenty of Jasper’s own asides and analyses from his lifetime of work in the region.

The foundational pages of the books about topics such as: history, terroir, and the grape varieties of Bourgogne aren’t inconsequential. Here Jasper has devoted a whopping 110 pages with an exceedingly meaty and important amount of text. One may be tempted to skip past these thinking, “Well, it’s really just Chardonnay and Pinot Noir, right?” but that would be a mistake as Jasper has really picked at every aspect here from planting to growing to vinifying to aging. I mean, while the white variety of Sacy has just a few sentences about it, I think it’s the most I’ve ever seen written about it!

But of course the main meat and wealth of this book are the massive and extensive maps that lay out all the vineyards of Bourgogne in glorious detail. While just the maps would probably suffice for most, there are descriptions about the history and current owners which are exceptionally in depth.

For example, Clos de Vougeot gets two pages including a great deal of Jasper’s own thoughts on this, the largest of Grand Crus in Bourgogne. And while there’s one handy map showing the overall classified vineyards of the village of Vougeot, the Grand Cru is then broken down into every individual parcel and owner which is just amazing. You will often hear that it has 80 different owners, but to actual see it and to know who has what where, leads to much better understanding, or at least it did for myself, someone who has been burned on at least one or two bottles of less than Grand Cru-ish Clos de Vougeot given that a decent chunk of it is definitely not Grand Cru material.

This isn’t the only vineyard to get this treatment and in fact, the detail is there for all of them, totaling 1,200 vineyards in the end. You can open up the book at any point and find it to be the most detailed reference you can find at that point you’ve jabbed your finger. I felt like a kid in a candy shop with this book as every page turned elicited a “Oh yes.” or “Wow.” as it’s simply an amazing reference book although for some reason, the index gave me a bit of problems in trying to locate things here and there. I don’t know if it was just what I was looking for or if that could be the one and only fault in the book?

Of course the question is, if you’re a proud owner of an undoubtedly well-thumbed first edition from 2010, should you invest in this second edition? If you know Bourgogne, then you know the answer to that as the region is very much in motion with a lot of high-profile sales, but also some smaller producers managing to wedge their way in at the corners they can find. You will most definitely find a great deal of updated information here as this edition is 150 pages longer than the previous. It’s a testament to Jasper spending his time exceedingly well after leaving importer, Field Morris & Verdin in 2017. And it should be noted, he takes advantage of the website to accompany the book by placing dynamic content such as the vintage reports there, where he can update them as he pleases.

I’d say that you can’t buy this kind of knowledge to a wine region, but it appears that you can, for a very, very well-spent £65. And if for some reason you’re not a lover of Bourgogne wines, then buy this for someone who is, so that you can “borrow” it from time to time.

(Note that at the time of review it is not available via Amazon, which isn’t a bad thing.)

(*) I’m using ‘Bourgogne’ instead of the English ‘Burgundy’ as the region as a whole has been trying to promote the use of the French name and I agree with this.

2 responses to “A book review of “Inside Burgundy 2nd Ed.””