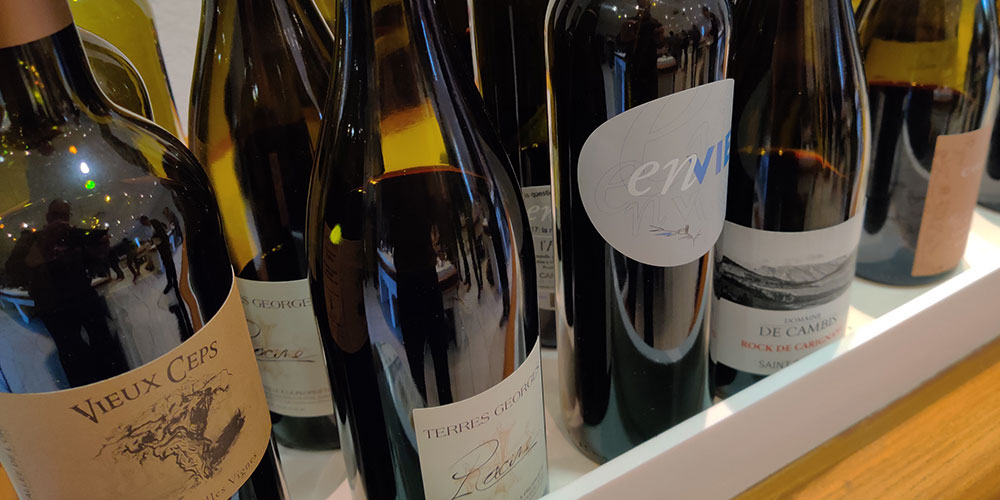 Mas de Saporta is a curious place. On the outskirts of Montpellier, France and technically in the town of Lattes, it’s an old farmstead that, as modernity grew up around it, was swallowed whole as various highways and train lines drilled right through it. While nothing is farmed there now, the historic house has remained and its 17th century (or older) walls now encompass a variety of entities, including a shop for the wines of Languedoc, a restaurant, and an event space which is where, at the end of the November I found myself amongst French Carignan producers.

The idea had been in the works for some time by the associations of Carignan Renaissance to work with Terroirs de Schistes to have a Carignan throw down and show the differences between wines produced from schiste or “slate” soils, versus calcaire or “limestone” soils. One wine from each soil was submitted by the cellars who participated and they were matched up by year. Wines had to be unoaked so as to allow full varietal and soil character to come out.

Initially there was a lecture about schist by Jacques Fanet, who wrote a book, aptly-titled, “Les terroirs du vin” and he took us on a whirlwind tour talking about how schist is formed and the various sites in the winemaking world that lay claim to it. Quite interesting overall to see how many high-quality regions sit atop this crumbling, mineral-poor soil.

Then we delved into the tasting. As was noted by some in attendance (who happened to be English oddly enough), this was not a scientific tasting as wines were presented non-blind. Yes, that could easily affect perceptions and if done again, it should probably be blind. But, taking that away, it was interesting to note that the Carignans grown on the different soils did indeed have different profiles. It’s true that winemaking styles play a factor in this as well but some overall trends seemed to emerge.

Wines from limestone soils appeared to be softer overall with longer finishes and anyone brought up on Burgundy being the pinnacle of winemaking (such as in the UK) would easily gravitate towards these wines a bit more. Overall the slate wines were more ready to drink, better fleshed out, and with a more sinewy structure.

As to which was better, that’s impossible to say as it’s a matter of taste. Carignan is by its nature a bit rock and roll when made well. So it could be that some find limestone or clay to produce a softer, less pronounced wine that they can get into more. Then again, the grape doesn’t have the rigid backbone of Grenache and the slate slims the wine up and gives it more verve, which, while making it more direct, also makes it really exciting balancing its innate characteristics quite well.

For me personally, I’m more accustomed to the slate version due to where I live, but I’m readily open to the limestone take as well and you’ll note that my scoring spread is pretty evenly split. My only criteria is that the wine be well made.

It’s best for one to drink and decide for themselves ultimately, so have a look at the wine database as well as the notes below for the wines we tasted. Note that 2018 Carignan wines by Chateau de la Liquière and Clos du Gravillas where tasted but were Brut de Cuve (“tank samples”) and were showing a bit off due to them being taken earlier this year for when this was to happen in April.

Great tasting overall though and I look forward to whatever they have in store for the future, especially as the Carignan association has just changed up leadership.