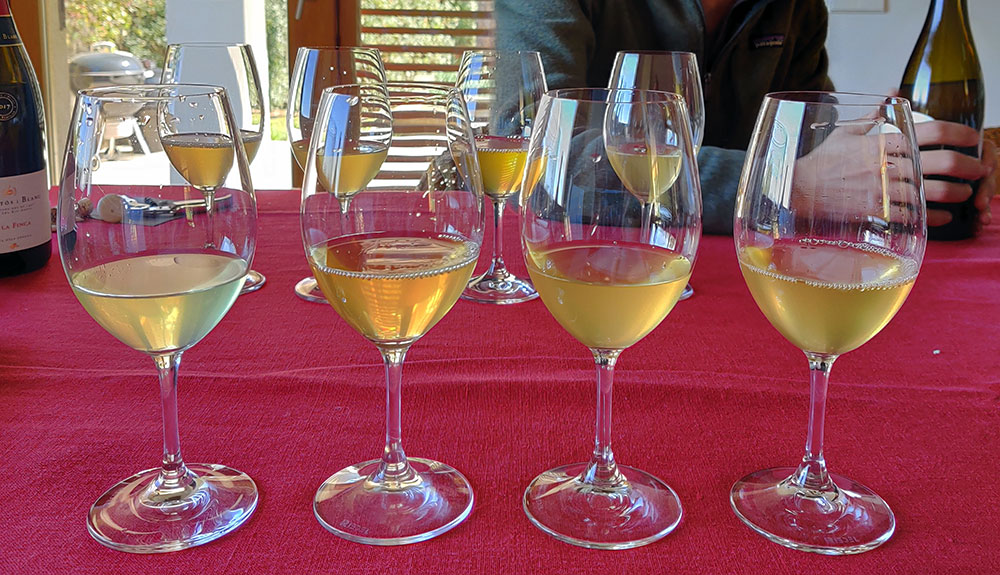 A much-delayed visit to Raventós i Blanc in Penedès finally came to fruition last week as we just emerged from “county confinement” to “regional confinement”.

With a brilliant sun shining upon us after weeks of cloudy weather, Pepe Raventós and I looked to the view of the gorgeous Montserrat mountains while walking amongst the budding vines, crossing this large pit of fossilized stones they excavated from the property, and then saying good morning to the horses, goats, and sheep who live up on a hill above it all.

We went back to his house and tasted several of their main sparkling wines initially. But, the real motivation for the visit was to have a chat about his eponymous garage wine project that is actually made in Pepe’s garage below the house in a non-intervention manner, aka “natural”. Subscribers can read the tasting notes below, but I’ll give a spoiler alert in that, as is often the case in wines of this style, the notes are definitely exotic and expressive in aroma.

Pepe and I compared notes after tasting through them and he told me, “Wow, you didn’t talk about the volatile acidity or anything else that others talk about as faults!” And it’s true, I realized that I hadn’t as while present, they were part of the wine and as far as I could tell, “intentional”. That’s admittedly a strange word to use when talking about wine where the concept is to actually shove your intent into the wine as little as possible.

As something of a contrast, I was having dinner with a winemaker last week who mentioned to me that she’d read my review of this Mollydooker wine and was surprised that I liked it as much as I did. And the answer is that I liked it for the same reasons I liked Pepe’s wines in that the intent was clear because Mollydooker are the complete opposite of non-intervention. The wines are slick, clearly worked over in the cellar to get the profile that they’re looking for, and very much “Modern Australian” but at the same time, there’s nothing wrong with that.

These are often missed points in wine-judging competitions in that some people want to give lower points on the grounds of, “I would never drink this”. That’s not valid reasoning and I nearly got in a fistfight with two gentlemen of a certain age at a wine competition in France as they judged every wine in this manner.

You have to take the wine as its presented, within its context and within its intended profile. This is why double-blind competitions where you don’t know where the wine is from simply don’t work as wine doesn’t exist in a vacuum. Context is key as it lets you know the overall premise of the wine and also, when a fault might actually be a fault.

Faults though, are a slippery slope of Twitter fights these days, as one person’s fault is another’s splendor and there is no objective answer on this front, other than to take things in context. If a wine like Pepe’s Vinya de Noguer, which is 100% Xarel·lo, has a bit of bruised apple in the aromas, is that a bad oxidation fault? To me, only if it makes the wine a bit short overall like the 2015, but not like the 2016 which is really savory and delicious. Or is the fact that the wines are visibly cloudy an issue? Only if you’re using “International Organisation of Vine and Wine” judging standards where how a wine looks somehow impacts how it tastes.

But let’s look at two more well-known examples. If a red Rioja Gran Reserva has carbon dioxide in it, is that a fault? You betcha. But what if a bottle of Champagne doesn’t have CO2? Well, then it’s just not really a proper bottle of sparkling wine, unless of course the wine in question is a Côteaux Champenois from the same region as the sparkling wine with the same grapes and it is actually supposed to be a still wine.

I could go on and on with a very boring list on this front and in fact, one can even write a lengthy book on this subject as it’s just as massive as it is often subjective which is why neither the Masters of Wine not the Court of Master Sommeliers have faults in their blind tasting exams. The moral of the story in all of this is however, context matters which is how it’s possible to find a set of still wines from a garage made by a “rebel” sparkling wine maker in Catalunya just a enjoyable as those from a highly-produced Australian cellar that will insist you only shake with your left hand as part of their overall branding.

When it comes to the open-ended question of faults, all I can say is, don’t have a closed mind.

One response to “Not finding fault”