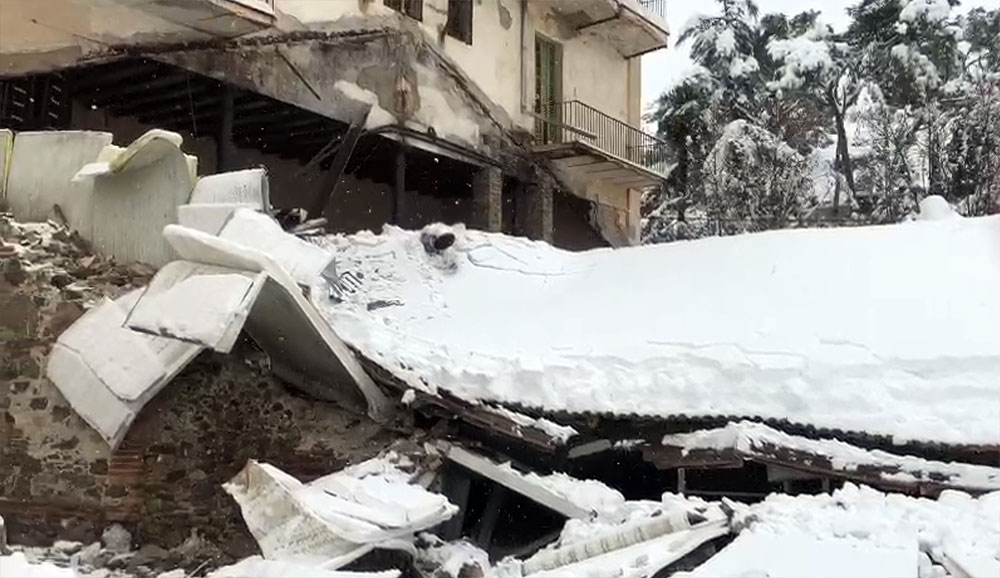 While most Spanish and international news reports have focused on the historically high snow fall in and around Madrid, other parts of the country have been hit hard by snow as well for the last three days which has intensified over the last 24 hours.

The main focus in Catalunya has been up in the Pyrénées, down through the interior province of Lleida and oddly, into the southern regions of Terra Alta and Priorat. While both are higher altitude, starting at 300m, they are also very close to the influence of the Mediterranean Sea which, for some reason has created an ongoing pocket of heavy snow.

Accumulated snowfall in Priorat has already reached half a meter (1.5ft) and is slated to continue through Monday. Unfortunately, the region holds many older buildings that were never designed to hold this much snow.

This morning we woke up with news of the collapse of a large portion of the main production cellar of Vall Llach, located in their La Final building on Plaça Catalunya in the village of Porrera. Between six and seven in the morning today, Sunday January 10th, the entire roof that housed their vinification area, refrigerated storage, and bottling line, completely collapsed and crumbled the walls as seen in the video below shot by winery director, Roger Simó that he sent me via whatsapp:

As Roger told me, the full extent of the damage remains unknown but inside was all of their inventory for 2019 as well as a great deal of 2018. Stock levels were higher than normal due to the current lull in sales from to the pandemic. Additionally, there were all the tanks full of the most recent, 2020 vintage which was already a difficult vintage due to the mildew plague that led to a massive reduction in yields. Now, there may be none of it left. Also, all their equipment from the presses to the bottling machine and pumps was in that building.

In this same building there’s a new underground barrel storage area that was built into the old subterranean cement tanks. While these barrels should hopefully be protected, full damage won’t be assessed for some time as the area is very unstable at the moment with ruble having strewn into the streets around it, including alongside the building I used to live in and from where I could see the daily activities at this cellar.

Another winery, Encastell rents a small section at the back of the cellar building to warehouse their bottle inventory as well. For the moment, they haven’t seen any losses, most likely due to a separation wall but winery owner, Raimon Castellví told me that they’re extremely concerned that further collapse is imminent and they’re working to remove whatever they can from the structure.

Very, very sad news that’s made even sadder by the fact that Vall Llach is extremely invested in the village of Porrera, making a line of wines to fund activities for retired residents as well as having created a pop up restaurant space during the past summer so that La Cooperativa restaurant (a culinary destination for the village) could still serve meals during pandemic restrictions. Additionally, they simply make some of the best wines in Priorat as I’ve written about often.

Due to the spotty internet connectivity as well as co-owner of the winery Albert Costa being snowed into his house in the outskirts of Porrera and phone lines being down, it wasn’t until around 13:00 that Vall Llach’s social media channels posted a statement, basically saying that they are waiting to find out what the full extent of the damages has been. I will be following up in the coming days as currently in Priorat, in addition to the continued snowfall and internet as well as landlines being down since yesterday, all of Catalunya is under “municipal confinement” due to the pandemic which means that we are not allowed to leave our villages of residence until the 17th of January.

Much like what happened when Rendé Madéu winery in DO Conca de Barberà was washed away in October 2019 due to heavy rainfall, an immediate outpouring of support for Vall Llach winery has already started within the wine community and hopefully we’ll see more ways to help in the coming days while the winery, as is often the case in Priorat, works to rebuild from these ashes. In the meantime, perhaps we can all open a bottle of one of their excellent wines in solidarity (or buy additional bottles from their online store). 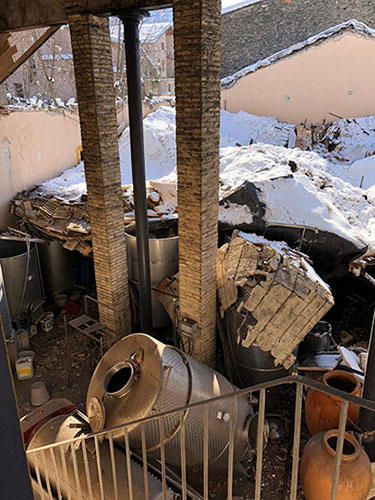 The old road between Porrera and Falset remains closed due to unplowed snow. This is unfortunately where my friend and winery co-owner, Albert Costa lives in his farmhouse outside the village. He managed to walked out to the main road through the snow and be picked up by a tractor to go into the village to see the damage firsthand.

Due to the instability of everything, they still can’t enter the structure and the roof will eventually need to be removed. Some bottles appear to be salvageable but the majority if not all of the 2020 wines have been lost as, even from the outside, it can be seen that the stainless steel tanks have been ruptured.

We’ll continue to see how this develops, but it’s clear that it’s quite tragic.

For anyone willing and able to donate to help them rebuild, please visit: www.reconstruimvallllach.cat