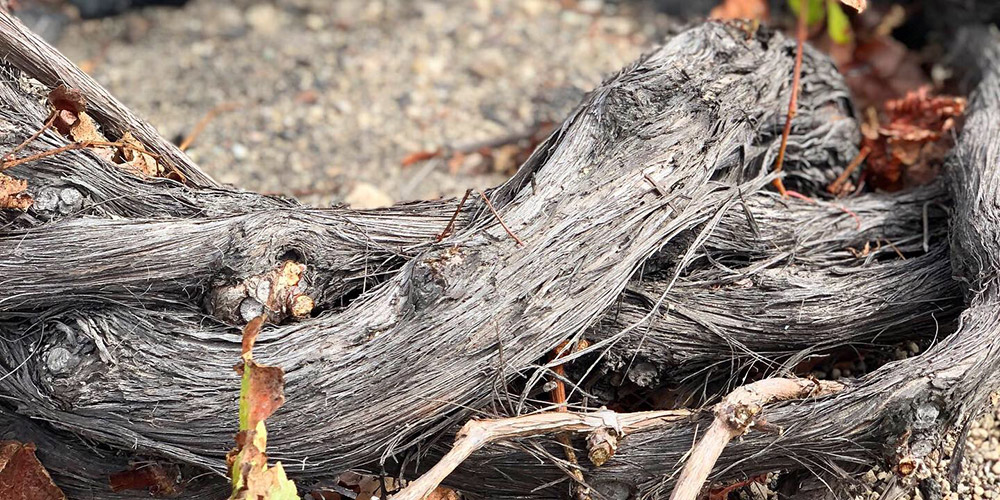 A love affair with Assyrtiko

Scrolling through my Instagram feed, you may think that I am a bit of an Assyrtiko fan girl and you’d not be wrong.

Fuelled by my love of all things Greek, I studied the language for two years and embarked on my own little Greek Odyssey. It seemed that the romantic idea of blue skies, clear waters and idyllic villages would appeal in the same way that a Provençale rosé evokes images of lavender fields and glamorous harbours. Wine can help facilitate this, something that is not lost on winery marketing teams especially for those of us living through gloomy days in London.

But sixteen years ago, before my Greek adventures, I was complete novice to the world of wine. I was working in an independent wine shop and recommending Santorini Assyrtiko from Hadzidakis to anyone who would listen as back then the UK market wasn’t exactly awash with Greek wines and it seemed like an odd choice to many.

I was definitely sold on Greece, but was I successful in selling the idea and the story of Assyrtiko to wine drinkers in south-east London? The truth is that it wasn’t easy. Opening a £10 (those were the days!) bottle and pouring customers a glass of a Greek Assyrtiko–pitched as a great alternative to a steely Loire Sauvignon Blanc or Chablis–should have been a piece of cake. Yet everyone always mentioned Retsina or bad experiences with wine on their one Greek island holiday. So, sell some bottles I did but I had to work at it and let my enthusiasm for the wine shine through.

Greece may be eternal but times have changed

The picture today is very different. Almost any and every Greek wine you can think of is now imported by somebody, whether a small importer or a large. Assyrtiko sales are not just limited to producers like Hadzidakis or Gaia (which was originally brought in by Novum, one of the first Greek specialist importers) and not limited to just Assyrtiko’s home island, Santorini. You can find Greek Assyrtiko on mainstream wine lists now, no longer just restricted to the ‘other’ or ‘interesting’ section at the back of the wine list.

There are also many styles to choose from. If you are unsure whether the salty, mineral, linear Santorini styles might appeal to you, there are plenty more fruit-driven alternatives coming from mainland Greece or other islands (most notably Tinos and Crete). There are oaked styles and blends aplenty; powerful wines and lean elegant ones, too.

Whilst we cannot yet say that Assyrtiko has entered into the consciousness of mainstream wine drinkers, it has certainly made an impression on the wine crowd. It is not just Assyrtiko’s unique taste profile (briny, lemony, salty, with intense rocky minerality) that appeals to us wine geeks; it is also the grape’s adaptability to harsh climates; its ability to withstand prolonged periods of drought and hot weather whilst simultaneously retaining its trademark low pH (as low as 2.8) and vibrant freshness. In times like today, when climate change threatens to rewrite the world’s vineyard map, it is grape varieties like Assyrtiko that may prove useful in ensuring that winegrowing doesn’t disappear from regions most vulnerable to climate change.

Assyrtiko is slowly starting to expand beyond its maternal home of Greece but it will take time before we see truly meaningful plantings elsewhere. The one notable international expression of this grape comes from Australia’s Clare Valley, care of Jim Barry, who fell in love with the grape after visiting Santorini on holiday, some 15 years ago, and is responsible for introducing this variety to Australia. In South Africa, Eben Sadie has planted this variety in the drought-stricken Swartland region and the wine trade eagerly awaits the results. Beyond these two countries, you will find small plantings in Italy and Lebanon but I have yet to taste any wines.

The best quality examples of Assyrtiko undoubtedly hail from its ancestral home, Santorini. However, these wines now come with equivalent price tags to match. Plantings are on the decrease as land becomes unattainably expensive and is often given over to tourism development rather than vineyard expansion. Easily seen in how Gaia’s winery is nearly pushed into the water by the airport runway!

Limited by its own success

Most wineries on Santorini (and indeed those from the mainland) own little land and therefore have to buy grapes to satisfy demand. The prices continue to rise – in 2018 they stood at around 5€/kg at 50% extraction but edged towards 7€/kg in the low-yielding 2019 vintage. Cost of farming in such an inhospitable place adds to the overall production cost of a bottle of Santorini Assyrtiko. This often requires the use of mules, which will set you back a whopping 400€/day while only working an average of 0.5ha/day.

Also, there’s a growing lack of specialised viticultural labour which is needed to look after the gnarled and basket-weaved old vines or koulouri. Additionally, some of the larger mainland producers have caught onto the Assyrtiko craze and have in turn driven the price of grapes up as they buy whatever they can from the island, pushing up demand. This all results in it becoming impossible to produce a cheap Santorini Assyrtiko.

Many wine writers and producers feel this is an issue. Those of us who are familiar with the inherent quality of the Santorini offering may feel happy to pay an appropriate price for wines made from often ancient vines (Argyros’s Estate bottling comes from 100-year-old vines!) and with high labour costs. In a sophisticated market like the UK, I believe it is possible to justifiably sell Santorini’s top wines (and these are indeed Greece’s top wines) at prices comparable to good village level Burgundy. However, this may not be the case elsewhere.

When it comes to attracting new consumers to the charms of this grape, it’s the mainland and ‘other’ island examples that may better serve as an entry into Assyrtiko. These expressions of the grape are often a touch softer, fruitier, broader in mouthfeel and therefore more accessible. They are more accessible in terms of price, too, and are more likely to be served by-the-glass in restaurants or come in under the retail sweet spot of £15, allowing the mainstream public to ‘take a punt’ on them. Here in the UK, it is easy to find such wines in specialist retail chains such as Majestic or even in more premium supermarkets. Such circulation is vital in introducing Assyrtiko to a bigger audience.

Ultimately, Assyrtiko will likely remain firmly in the niche category of grapes, at least for the foreseeable future. Volumes are small and although we are seeing more and more examples of this grape from outside Santorini, it would take a larger international effort to bring it to the attention of mainstream wine drinkers.

A few producers of note

Estate Argyros
At 120ha, Argyros has some of the largest vineyard holdings of Assyrtiko in Santorini, with an average vine age of 70 years but as many as old as 250+ years. Their Cuvee Monsignori Assyrtiko is a benchmark premium style of Santorini: textural, concentrated, saline and crisp. Produced from some of the oldest vines. Argyros have just released their newest, most premium wine – Cuvee Evdemon from the 2016 vintage and it is worth seeking out, if your wallet allows. A preview of this wine, tasted back in October last year, left me somewhat speechless. A wine so intensely mineral and gunflinty it puts the finest Rieslings to shame.

Artemis Karamolegos
A relatively newish entrant, producing wines since 2004, but now the island’s 3rd largest producer. Try the ‘Pyritis’ Santorini Mega Cuvee, made from 120yr old vines in three distinct parcels of Assyrtiko. This is a wine with a very defined shape, marked by smoky minerality, intense citrus core and immense purity. For something interesting, try their skin-contact Assyrtiko ‘Mystirio’, which is one of my favourite examples of ‘orange wine’ out there, with an acid structure that remains vividly intact despite the two week skin maceration.

Gaia
Gaia’s Wild Ferment Assyrtiko is well-known for its often intensely reductive and smoky character and huge aromatics. These wines are known to age longer, too, as winemaker Yiannis Paraskevopoulos prefers to use higher doses of SO2 at bottling. Gaia also make an experimental, aged under the sea Thalassitis Assyrtiko Submerged, which comes in a clear bottle adorned only by remnants of sea crustaceans.

T-Oinos
Tinos island, with its unique geology of huge granite boulders, is fast becoming a hotspot for high quality wine production in the Cyclades, despite having only a handful of wineries. The most prominent of these is T-Oinos, the brainchild of Alexandre Avatangelos and Gérard Margeon and with renowned Bordeaux consultant Stéphane Derenoncourt on board. T-Oinos’s Clos Stegasta Assyrtiko is one of Greece’s finest white wines. The granitic soils lend an altogether different character to the intensely volcanic wines of Santorini. Made in a combination of stainless steel, oak vats and oak barrels and aged on lees for seven months gives a richer, more Burgundian expression of Assyrtiko. In some vintages, a subtle struck match character accentuates the wine’s Chardonnay-like finesse; I have heard it described as the Coche-Dury of Greece.

Lyrarakis
Family-owned Lyrarakis winery focuses on cultivating Crete’s forgotten indigenous varieties though they make a significant amount of Assyrtiko, too. Whether as a standalone wine, from their Vóila vineyard, or blended with Vidiano, this is a great entry into Assyrtiko at an attractive price point. Lyrarakis Assyrtiko is more fruit-driven and less overtly taut and linear than other island examples but still with a great structure and freshness.

Biblia Chora, Kavala
Biblia Chora’s Ovilos is one of Greece’s iconic white wines. A blend of Assyrtiko and Semillon, this wine makes you wonder why anyone bothers with Sauvignon! Assyrtiko and Semillon seem the perfect blending partners, the former lending strict acidity and crystalline citrus fruit where the latter complements these flavours with a textural backbone. A lick of oak gives a wonderful crème brulee note to the finish.

3 responses to “A love affair with Assyrtiko”