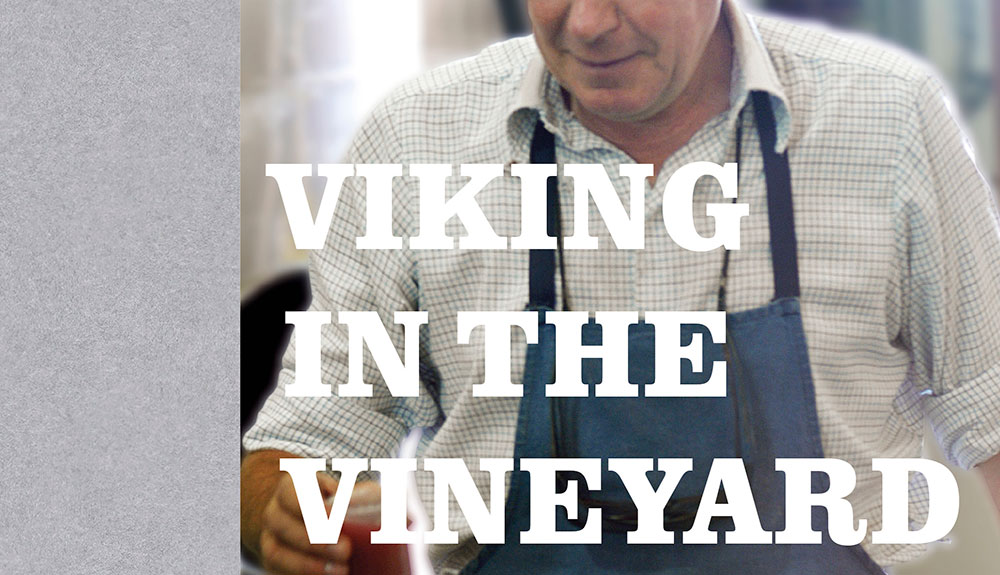 Here we have the memoir of Peter Vinding-Diers, a winemaker whose career has spanned over half a century–to date. Why the title of “Viking in the Vineyard“? That’s due to the fact he’s originally Danish although he’s been very much unhindered by his native land’s lack of quality wine and has worked and/or owned wineries in South Africa, Australia, Spain, France, and Italy.

There is a however a quieter subtitle on the cover which is “Stories from a revolutionary winemaker” and that’s the part which is going to be of most interest to any reader. There are no flashy tales in this book and there is no grand pomposity to the writing. Peter tells the tales as it seems like they happened and along the way, mentions how he made a number of discoveries based upon his own curiosity. These discoveries have come to be seen as commonplace to quality winemaking these days but as he explains in the text, they very much were not the case when he started out.

The bulk of the book focuses on Bordeaux as that’s where he spent some 25 years of his career. For those who might not be terribly into Bordeaux, there are a going to be a lot of names and places which probably don’t roll off the tongue as was the case for myself. Despite this, the fact he arrived there at Bordeaux’s lowest period in the 1970s, he’s able to give an outsider’s inside account of how things changed over the years and how a lot of money started rolling into the region which has changed it to the wine region we know today.

The wealth of the book being about Bordeaux does mean that the periods of time which happened in the shoulders of the book (namely, South Africa and Sicily) are a bit thinner. Also, as Peter is a winemaker first and foremost, a bit of the text can read a little cut and dry. A good example of this was in Sicily when he comes across a potential farmhouse to buy and he “hoped that Susie [his wife] would like it. And then, she did!” I was a little bit tired of this manner of writing in the beginning, which of course is the oldest period to be covered in the book, but it didn’t bother me as much as time went on given the wealth of material he’s relating here.

On that front, there are a number of key takeaways. The biggest being the number of winemaking “innovations” attributed to the natural wine movement that were actually things that Peter started. One that stands out the most is his insistence on using the ambient yeast from the winery as each has a different signature and he picked up on that decades ago when commercial cultured yeast strains became all the rage to meet a consistent commercial demand.

Also of note was in the later part of his time in Bordeaux when starting up a new cellar and they weren’t able to purchase a tractor for tilling. Instead, they purchased two horses which they used for the same work and he noted the benefits back in the 1980s of using animals for this work instead of the heavier tractors.

But there’s a key aspect to Peter’s winemaking that becomes apparent which is his doing a great deal of it by feel and being interactive with the vines and vintage you have at any given point in time. He is by no means an “non-interventionist” but he does know how much to give and how much to take in the cellar and this has become a roll model for current winemaking trends.

Another interesting note was that somewhere in the back of my head I had been told this, but it was great to read the story about how Peter Sisseck ended up staying with him because he’s big Peter’s nephew and thus why he became “Ping” and thus, lent that name to Pingus. Younger Peter does come into the story at several other points, even up to where it ends in the current day in Sicily and it was interesting to read all of this rounded out a bit more.

Overall, if you want to read about the sweeping changes that have happened over the last half century in winemaking, this makes for a fine book without any over-the-top insertions of ego and you come away with a sense that everything really went along much as how Peter has told it.

A book review of “The 24-Hour Wine Expert”

A book review of “Root Cause”