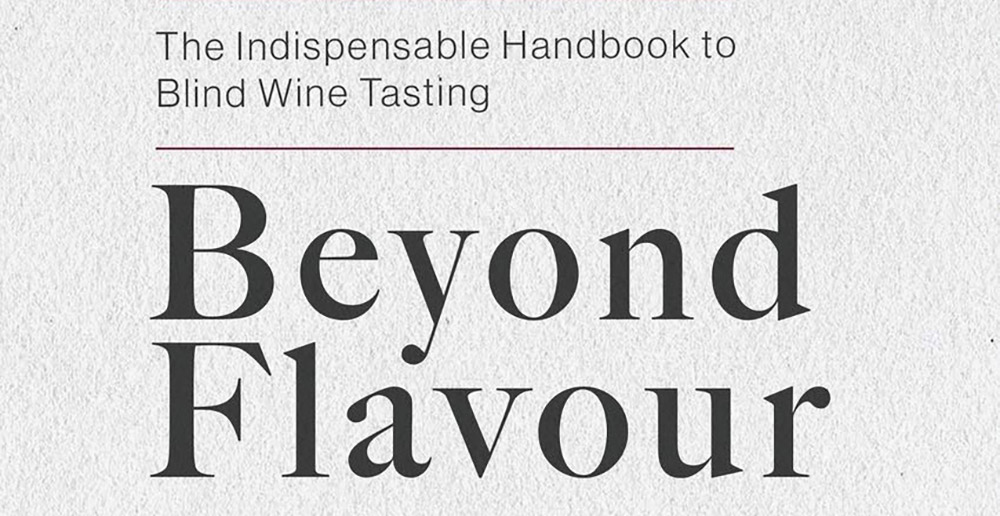 A book review of “Beyond Flavour”

It’s incredible to think that the act of blind wine tasting has gone from a state of complete oblivion by the public at large to now being one the niftiest, wowiest party tricks one can be capable of. What’s even more impressive is that in the short span of the last six years we’ve gone from having essentially no texts on the subject and needing to spend big money to train with people possessing post-nominal letters to now, where we have at least two very good and very complementary books on the subject.

I’ve previously reviewed the elder statesmen of the two, Neel Burton’s “The Concise Guide to Wine & Blind Tasting” and now we have Nick Jackson’s, “Beyond Flavour” to accompany it. While both are extremely advanced tasters, their paths of arrival are quite different with Neel having learned mostly on his own and working as a physician whereas Nick is a Master of Wine who came up through the more classical ranks, starting with the WSET.

Both books have their strengths and weaknesses depending upon what you look for or need out of a book such as this. Also, both authors are British who self-published amazing passion projects where they’ve poured all their knowledge into the texts to the betterment of the wine community at large and, having done several efforts myself, are definitely not done with the idea of any large financial gain in mind.

If you want to know how the two books largely differ from one another, I would say that Neel’s book is very holistic, taking someone from really knowing nothing about blind wine tasting up to having a good working knowledge of how to do it. On the other hand, Nick’s book jumps right into the deep end of things and if you’re looking to ease into this very deep and very long pool, this is probably not the book for you which Nick is upfront about right from the beginning.

And it’s this aspect of Nick’s book that is one of its two main selling points in that he strives to deconstruct how we’ve (as in those of us who have completed various wine studies) all learned to taste wines blind by looking less at the individual flavor qualities and looking at the more objective general qualities. The most immediate example would be how he re-approaches acidity by talking about its “shape” and “direction” as opposed to only its amount as is the case in traditional tasting methodology. He also takes a similar tack with the tannins in red wines.

It might seem as if I’m saying Nick’s book essentially throws away everything that Neel (or your WSET educator for that matter) has set up, but that’s not the case. I think you really need to have learned this traditional approach to blind tasting before Nick’s ideas can be applied. This isn’t about junking the idea of say, currants being a tell in Cabernet Sauvignon or graphite in Merlot. Just because its name is “Beyond Flavour”, it still talks a good deal about flavor components in wines as they’ll always be crucial to understanding them and their origins. Nick’s argument is put simply that we should look beyond these aspects as they can often mislead–and exams will often be designed to do just that at the higher levels.

Another reason that this book is for more advanced students of blind tasting is the fact that it’s designed to be read as a reference book and if you have it, you’ll most definitely use it as such given how jam-packed with information it is. That is perhaps one small failing in that I think it’s printed via “Print on Demand” from Amazon which is cost effective for independent, niche book such as this, but it comes at the cost of design. It’s 164 pages and 12.5x20cm. I’ve published books in the exact same size, but they’re full color with a lot of pictures. I wish Nick’s book perhaps was a few more pages in length, spread out with better margins, and printed on better paper. But, that’s for a later edition.

And this brings me to the next point which is that Neel’s book is on the third edition and showing great polish at this point, allowing him to continue expanding and building upon the solid structure he’s created. This edition of “Beyond Flavour” is the first and as is often the case, I feel that the next edition could see it really sing as a reference text with some minor improvements (particularly with the layout and design) but also in terms of the thesis Nick has broached here. There’s a lot to build upon here and, as grandiose as this may sound to people who don’t blind taste often, Nick has really redefined part of the approach.

The grape profiles are massive and extremely complete. It was perhaps one element to Neel’s book that I’ve always felt could be improved upon a little in that he doesn’t always follow standard tasting attributes whereas Nick does–showing their very different backgrounds. Also, Nick’s regional references are overall extremely solid and both of these sections I’m sure will be well thumbed by anyone using this for studies.

The depth is because Nick is a rather recent Master of Wine who has tasted very heavily from “the classics” and broadly from everything else. This plays in his favor for the said classics both for coverage as well as in-depth knowledge and it shouldn’t come as a surprise given that he’s worked for Sotheby’s which is about as classic an enterprise as you can get in wine.

The trade off in this is that certain classic preferences and innate concepts then come about. As I was reading along and saw vast space dedicated to France, there was a specific note I was kind of expecting and wasn’t let down when I did see it: “Carignan is included here because it is widely planted in the south of France and northern Spain, and not because it is often found as a varietal wine – it is not. It is a blending variety.”

This is essentially word for word what I’ve heard countless other Masters of Wine from Europe (especially of a certain demographic) say about this grape. An English one was guilty of it but has greatly changed his stance in the last five years. Another from England was very much against the grape but it seems she’s marginally open to it at this point but I still have my doubts. But then there’s another from the Netherlands who was speaking at an event in Barcelona about Garnatxa Blanca when he brought it up and went on and on about how it’s essentially a shit grape in his opinion. All of us in attendance wondered why on earth they brought someone so out of touch with the current reality as, anyone who knows me, knows that I’m a tremendous admirer of what is actually, a tremendous grape.

I mention this as it allows one to see the cracks that currently exist in an otherwise great book. Cava is another victim for instance as Nick states that the region has some very good wines, but those aren’t to be talked about and instead it’s the supermarket segment that’s to be discussed–as if Champagne wasn’t guilty of having some crap examples as well but those will be ignored in favor of the marquée names. There are other small examples such as these, especially in the New World wines that show where Nick’s preferences lie. Zinfandel is described as having “structureless structure” and is essentially dismissed in favor of Primitivo as I have to assume due to the former being American, the latter, European, despite being the same grape.

We all most definitely have wines that we prefer in our own drinking, but it was just difficult to read them as a) they’re not true and b) they’re holding back a very good book, from being an absolutely outstanding book.

So, this small criticism aside, is this a book that anyone working on blind tasting should pick up? Most definitely, yes. Nick has done an excellent job in taking on and examining a new facet to blind tasting that few of us have really thought about. It’s thought provoking and it allowed me personally to better formulate a lot of ideas I’d had around the subject but hadn’t really been able to pull together cohesively. Often you smell and taste a wine to think, “This is X” but it’s hard to explain why sometimes, but thanks to this book, I can see there were items I was quantifying without really realizing what they were.

If you’re just getting started out, I would recommend give Neel’s book the first read. If you’ve been at this for even a little while, pounce on Nick’s book and whenever he makes a second edition, as I’m sure he will, devour that the moment it comes out as well because Nick is really on to something here and if you’re serious about blind wine tasting, you’ll want in on it as well.

4 responses to “A book review of “Beyond Flavour””