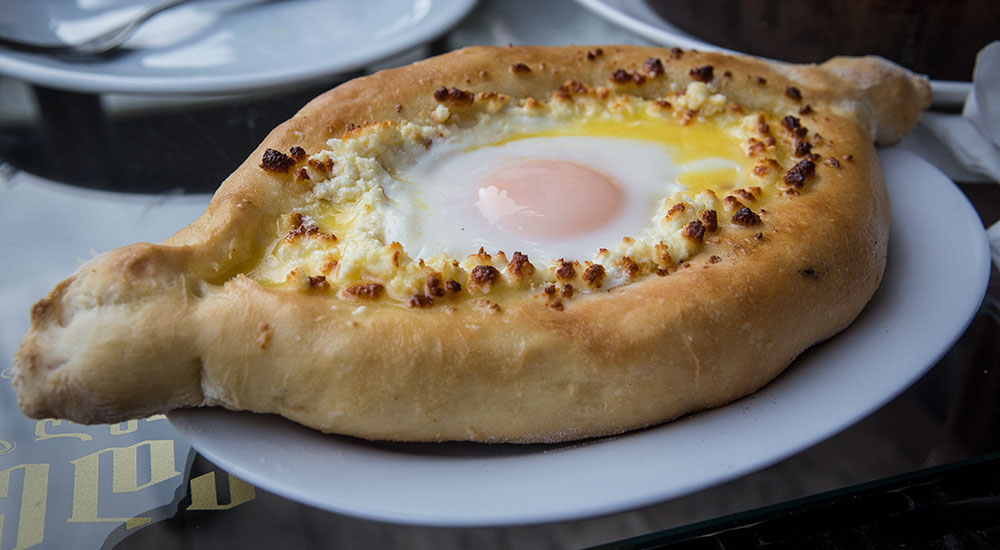 Daria Kholodilina is the co-author of Georgia: A Guide to the Cradle of Wine as well as co-owner of the tour company, Trails & Wines. Here she breaks down a number of lesser-known facts about the food and wine of this delicious country. See Part II for more.

This may be a surprise to anyone who’s been to Eastern European countries, but vegetarians eat very well in Georgia. Despite Georgia’s image of sword-wielding carnivores with these strong, bearded Kakhetian men constantly grilling mtsvadi (pork of beef barbecue) that are then paired with endless liters of red wine, Georgia is actually great to visit if opting for a plant-based diet.

There are many veggie-only dishes (pkhali, jonjoli, lobio, khachapuri) but it’s also the case that the majority of population is Orthodox Christian and they take their fasting days very seriously. Every food establishment will have either a “fasting menu”, or several “fasting options”. What’s on earth is a fasting option to eat when you’re supposedly not eating? Basically, it’s anything without meat so ask for samarkhvo anytime when ordering if you want to skip the meat.

As far as I know, it’s still the case, right now in March of 2020 that Georgia is the oldest winemaking country in the world given that the ancient Georgian started cultivating grapes and fermenting them in clay vessels at least 8,000 years ago.

The old, rustic, traditional way of fermenting white grapes together with skins creates so called amber or orange wine and that’s what every Georgian usually starts drinking. Often they begin as teenagers spending long summer days in an uncle’s village or then through long winter feasts with the extended family.

Of course, there are international style wines produced and sold in Georgia as well that most would recognize as more “typical” white wine. But, this “ancient” method is still much more popular in the rural areas. So don’t be surprised when you get fifty shades of yellow if you order a tasting flight in a wine bar or winery!

Ordering and paying separately? No way!

Georgians are masters of covering the table with various dishes, even if it’s a business lunch. Moreover, ordering a separate dish per person is exceedingly rare as it’s usually several appetizers and main dishes at the table with everyone sharing. While you may be tired of the “small plates” or “dishes to share” concept found in cheeky restaurants in the US and Europe, you needn’t worry about going hungry in this case!

Covering the bill will be a much different issue however. Locals are often trying to pay for each other and the guest present at the table with the servers standing and waiting until a compromise is reached. As a guest, should you try to pay? You’ll probably only achieve it if you can snag the server on the way to the restroom near the end of the meal and… if you can speak Georgian. Just remember to say, “ანგარიში, თუ შეიძლება!”

Tbilisi is a new destination for craft beer

Alcohol in Georgia has long been all about the wine. If you’d visited five years ago and just felt like a cool beer (probably after over-indulging in Saperavi wines the night before) you might have had only a few options in a bar or a supermarket. These days however, Tbilisi boasts several decent craft breweries and bars that serve a variety of locally brewed APAs and IPAs. Many of them are quite good including Black Lion IPA and Number 8.

Khachapuri must have cheese, full stop

Maybe you’ve seen the boat-shaped adjaruli khachapuri conquering the stomachs and like counts of international foodies on Instagram? It seems that more and more chefs around the world have decided to load up this mighty and traditional boat with countless other products, although I’ve noticed that cheese is not amongst them!

This may make for a great photo of the moment, but it completely obliterates the mouthwatering concept that is the khachapuri. In Georgian, “khacho” means cheese or curds, and “puri” means bread, so there you go. Deviate from this norm and while you’ll still have that “puri” of a boat or flatbread but it will most definitely be no khachapuri and honestly, it might very well sink under so much hubris.

Do note that Georgian gastronomy researchers are currently working to get the khachapuri on the UNESCO List of the Intangible Cultural Heritage of Humanity. It will be for the regional varieties based upon their different cheeses that are used because again, khachapuri must have cheese!

On writing a Georgian wine guide