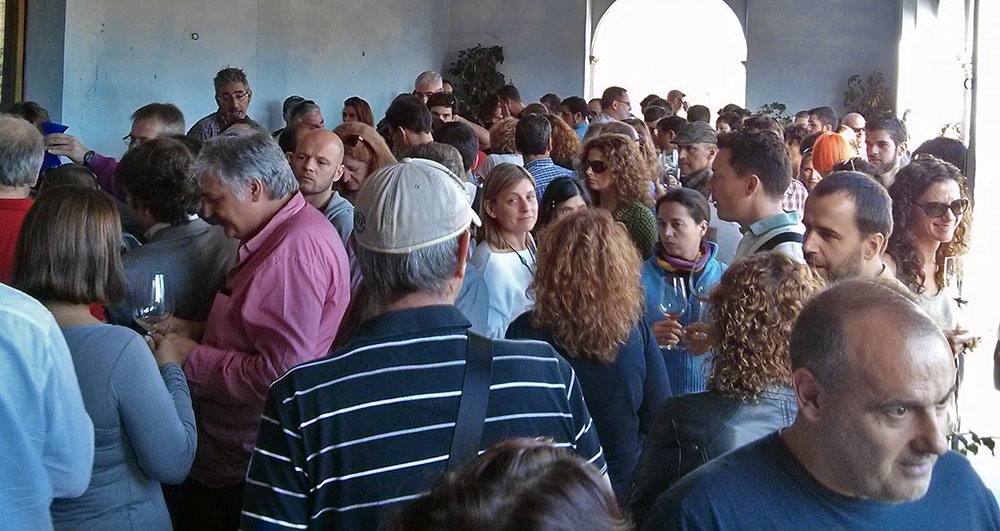 A window back into the pre-pandemic

We’re just not there yet

Last week I went to attend a professional wine tasting here in Catalunya. It’s held inside the striking location of an abandoned church up on a hill with a view to the village below and its vineyards fanning out from where the houses end.

While waiting in the long line to get in I noted that there were very few people wearing masks, maybe one in five at best. More importantly, I could see that it was a quickly-growing crowd, heading into what was going to be an enclosed space.

Prior to arriving, I’d assumed that as we’re still very much in the pandemic, various Covid-19 protocols would be observed (tasting outdoors, enough space between tables, limiting the amount of people allowed in the tasting area, etc.) As I stood there thinking about the whole situation and seeing no thought given to these prevention measures, I made the decision to leave.

Photos would then also confirm that the event was indeed crowded and people who had attended it told me that, as I had thought, there were no controls at the entrance to limit the capacity of the space. A press release afterwards said that there had been over 200 people (the tasting took place over 2 hours). In various photos on social media, I didn’t see anyone wearing masks given that they were tasting wines, but they were also posing in groups, hugging each other and generally giving the appearance that everything is back to normal, when it very much isn’t.

The cure isn’t yet a fix

In Spain we have the second-highest full vaccination rate in Europe and seventh-highest in the world, standing at about 79% of the entire population as of this writing. It’s clear that this has confided a false sense of security in people who (just like me) want to get back to our normal lives before this epidemic happened. But, as everyone in the epidemiology community keeps saying, relying on the vaccine alone, is simply not adequate.

Breakthrough infections are plenty common and added into that, new studies have shown that vaccine efficacy drops steadily with time. Thankfully in Spain, we still have some controls in place at public places and beyond that, it’s up to people’s common sense to not do things like pack a pile of people into a confined space, without masks.

Perhaps I have a greater sensitivity to the issues around COVID-19 as I had the “honor” of being one of the people to contract it very early on in March of 2020 and full recovery is a much longer process than what anyone wants to talk about currently.

Once a good 4-6 months of extreme fatigue and weakness largely passed, I was to find other issues as well. The main one was found during my yearly blood workup six months ago (bless you, socialized medicine) in that my triglyceride levels were way off showing poor liver function. An analysis via ultrasound showed I had fatty liver and the doctor told me it looked like I had the liver of a heavy drinker nearly twice my age. A second analysis would confirm the first.

Given that I work in wine and we had a lot of long days at home in the past year, people would probably have assumed that I’ve been hitting the sauce a bit much. As much fun as that would have been, it wasn’t the case. Like many back in the early days of the 2020 lockdowns, my wife and I were splitting a bottle of wine every night, dipping into some our previously untouchable bottles but we quickly backed off as it was just too much.

As both of us weren’t traveling for work anymore, we had been cooking at home a great deal more and eating a very healthy diet. On top of this, my wife had her blood analysis done as well and didn’t have any of the issues I had; the only difference being that I had Covid-19 and she did not.

What gets more interesting is that the technician who did my second liver ultrasound told me that he had the exact same problem with his liver despite drinking only one or two beers a week, but given that he works in a hospital, he had contracted Covid-19. On top of that, a friend of mine inversely found out that had had the virus because of a similar result with his liver via his regular blood analysis and upon doing an antibodies test, it showed that he had been positive. But, here’s the mind-blowing aspect: he had been completely asymptomatic.

I’ve asked a number of friends in various facets of the wine trade if they’ve found these results as well and unfortunately, routine blood analysis isn’t done in many countries it appears. I’d suggest that if you’ve had the virus or have any suspicion that you may have (which honestly, is everyone at this point) go and do a blood workup as soon as you can because they’ve found about 1/3 of people who have had COVID-19 have had liver damage to some degree and while it’s seen to be worse with more severe symptoms, it can still affect anyone who has had Covid-19.

The important reason you want to get on this is that most liver damage, if caught early, is largely reversible. My doctor told me to immediately start on a particularly boring but necessary diet. I had to cut out all animal fats (no cheese, dairy, fatty meats like bacon, lamb, etc.), increase fruits and vegetables, and of course absolutely no alcohol.

After doing that religiously for three months, my levels came back in line and after following the diet strictly another couple of months, I managed to lose about 10% of my previous body weight which was an added bonus. Additionally, it made me rethink my diet in general which was long overdue despite eating generally well.

I know I certainly don’t want to walk back down this road and to be honest, if I were to catch it again, I’m rather worried as to what state I’d be in afterwards despite being fully vaccinated. I know there are others in a similar situation but there’s something of an omertà in talking about it as it’s “not fun”. This is unfortunate as we can’t fall back into old patterns and let the virus (or a mutation far worse than the new Delta+) start spreading again or we’ll all be facing this yet again with our war chests and sanity deep in the negative.

Keep in mind that we beat polio and smallpox not by learning to live with them, but by eradicating them.

If you ignore it, it’s like it never came

I get that there are few who want to hear this and in wine circles there’s a push to keep a stiff upper lip and just “get on with it”.

I’ve seen a number of trade tastings in the UK as well as other locations around the world lately that have gone back to a lot of people in a single space bumping asses and elbows. It’s a format that made sense historically as it’s the easiest way to get a lot of wines into a lot of hands in a short amount of time but is completely incompatible with pandemic protocols if we’re to stop the continued mass spread of the virus.

In asking a friend who works for a distributor in the UK about a tasting they put on, she told me that they had good air circulation, took temperatures when people arrived and, “Well, we can’t hide forever.”

There’s definitely truth in that as governments can’t continue to pay us to stay at home and life has to move on in some fashion. There is however a question in that if you need to get to a destination and there’s a curvy road in between, do you take that road at night, full speed, and in the middle of pouring rain, or do you do it in saner conditions? And yes, there’s always a choice.

Let’s not forget that it was refusing to stop tastings until the very last minute that led to mass infections for many people in the wine trade right after a Spanish tasting at the beginning of March in London. Back then, we didn’t know what we do now so in theory, we should be able to do things in a saner fashion that doesn’t put people in a difficult situation where they have to act against their own well-being.

There are ways to still hold events and be safe as was shown by a tasting I attended recently here in Catalunya for Alta Alella’s “10” release. Everyone arrived fully masked, to a space with very good airflow. We then each had to subject ourselves to having a nasal swab which was then put into a rapid antigen test. Then, we had to sit and wait with the mask on until the results of the test came back negative at which point, they whisked us away for an aperitif to wait until everyone else was tested.

Was it annoying? Yes, as it added a good half hour of waiting for things to start. Was it unsexy? Very much, especially the nasal swap, but despite taking some of the glamor out of the event, it allowed 30 people to sit together in a tasting room (again with good air flow) and have some great wines and a meal together without having to worry about the threat of illness. This happened three weeks ago and to date I haven’t heard of anyone being infected as they also took all of our contact details to track and trace in case there was an incident despite all the precautions.

This is the problem as we head into winter in the Northern Hemisphere in that the pandemic is still very much here and the virus is more transmissible than it’s ever been. We’re in a far, far better situation than we were this time last year and we can do events, but we can’t let our guard down.

I firmly believe that we can and will get through this, but we’re going to have to be smart about things and realize that some day we will be having the fun we used to have back in 2019 but at the moment, we’re just not there yet.

7 responses to “We’re just not there yet”