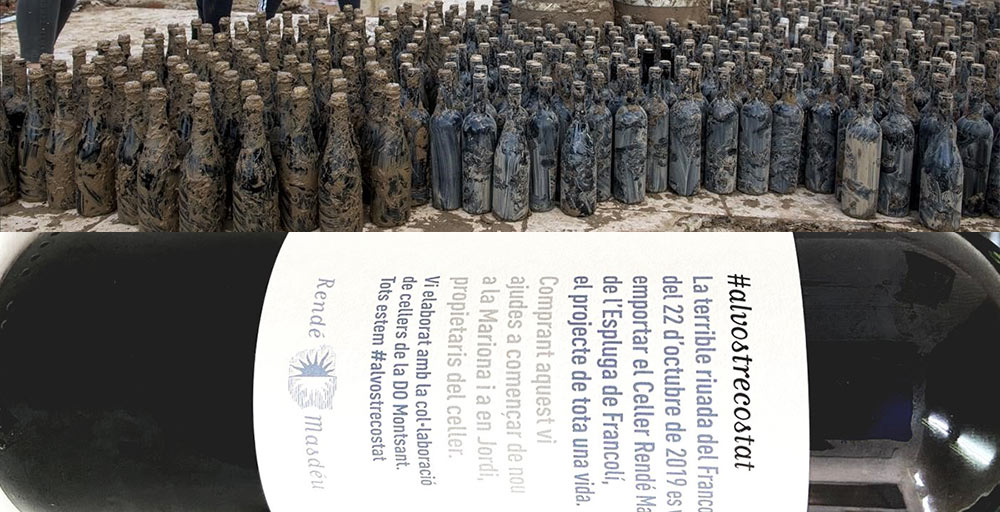 These have not been the finest of months for wineries when it comes to Mother Nature… and sadly, probably won’t be the last that we’ve seen. Fires have ravaged Southeastern Australia destroying cellars, homes, vineyards, animals, and lives. Northern California saw fires that destroyed wineries again this year. Then of course there was Lismore in South Africa which, while apparently an act of arson that took advantage of a dry time of the year, has still left Sam O’Keefe with a very rough road ahead despite all the support from wineries.

But we can’t forget about Rendé Masdéu here in Catalunya which was literally wiped off the face of the earth due to a massive storm in October that dumped 160mm (6.5in) of rain in about four hours. It seems fitting to revisit what happened to this cellar, now that we just had another massive storm, “Gloria”, passing through Valencia and Catalunya that dumped about 210mm (8.5in) in a 48 hour period. To put this into perspective, in the southern parts of Catalunya, we usually see around 350-400mm of rain in an entire year so these weather events are terrifying.

It’s been heartwarming to see all the work done to try and get Rendé Masdéu back on their feet so that they can continue to make wines in DO Conca de Barberà. Again, this is a small region in Catalunya, but the help has come from far and wide. As Sam at Lismore in South Africa rightly pointed out, “Part of my concern, I guess, is that people will be very forgiving in the short term. But by the time they’re expecting the ’19 vintage, it will be long forgotten. I could lose all my listings.” It’s a nasty aspect to the world of winemaking in that you need to keep producing every year or you can lose the entire distribution you’ve slowly set up. It’s but one of the many reasons that fellow winemakers immediately jump in to help given the knife-edge existence that people don’t realize winemaking is.

For Rendé Masdéu, there have been several initiatives put into place that will take place over the next year to help them. Yes, they had insurance, but this never covers entire costs. For example, wine in the tanks is usually paid for at going bulk rates that are nothing like the finished wines and you get 1/10th or worse the final revenue. So, it’s important to take a look at everything that’s been created to make up for the shortfall of the insurance.

I realize this may seem like a lot of items to take in, but I wanted to emphasize that while this happened back at the end of October, the efforts aren’t tapering off and you (yes, you!) the winedrinking public can help out by doing little more than just enjoying some wines and events. Now that “Dry January” is almost to a close, get busy!

Oh, and you can tweet or share any of these efforts with the #alvostrecostat hashtag. While I put little faith in social media these days, if you’ve already contributed to the above items, it’s just one more action that could hopefully do something more.