There are but two things which will unite any person holding a Spanish passport: an utter hatred of politicians and a complete love of gazpacho.

For those who might not know it, gazpacho is a cold, tomato-based soup, originating from Andalusia in Southern Spain. It’s rather impossible to explain unless you’ve had a cold bowl of it in the middle of the Iberian summer. Fresh, crisp, and filling but not heavy, it’s probably the most perfect dish for the scorching climate and it’s why you can find it throughout the entire peninsula (in Catalunya spelled Gaspatxo).

The core ingredients of a traditional gazpacho are: tomato, cucumbers, green or red pepper, onion, bread crumb, garlic, vinegar, water, and salt which are blended to a smooth texture. When served, you usually put a splash of fresh olive oil, salt and the all-important stale/toasted/fried bread crust into it to give a little body to the light base and finish up old bread. Also, the option of green or red pepper is one of the key differences in final flavor. I’m admittedly more in favor of the red pepper as if you want green notes, these are carried by the cucumber.

The idea that there’s such a thing as a “cherry gazpacho”, “watermelon gazpacho”, “raspberry gazpacho” or whatever else, are lunacy dreamed up by culinary deviants attempting to unnecessarily fancify it and in turn, sully, the good name of gazpacho. Sure, you can maybe get away with saying that a slice of pineapple is “carpaccio” because it’s the style of cutting beef thin and serving it raw. But much like hummus not made with chickpeas, if gazpacho isn’t made with the aforementioned ingredients, it’s not gazpacho but cold fruit juice served in a bowl, and to be shunned at all costs.

Mama made it better

While everyone in Spain will claim that their mother makes the best gazpacho, these mothers are all now retired and fewer people feel like taking the time to make their own at home. Starting about 15-20 years ago, Spanish supermarkets have been carrying their own brands during the summer, either in bottles or more commonly in tetrabrik cartons. 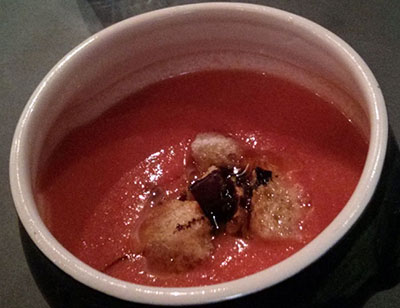 The valid question is, “If it’s such a traditionally homemade affair, are any of these commercial brands any good?” If you want a a refreshing, cold, tomato-based soup, then most of these will work. If however you want something with a bit more flavor and depth, there’s a very wide variation between commercial gazpachos.

Given this, I picked up eight readily-available gazpachos at the supermarkets near me, tasted them and ranked them so you don’t have to.

I applied a standard wine tasting approach to them, looking for which gave the most depth and balance, placing them in the three star bracket system I use on this site to categorize wines. Interesting to note is that most were in tetrabrik cartons, two were in plastic bottles, and only one, the Ferrer, was in a glass bottle.

Please note that I did not taste these gazpachos blind as I always do with the wines. If there’s interest, I may repeat this again next summer and apply more stringent tasting parameters. What I’ve done here was just to get a “Gazpacho Baseline” by tasting all these different brands over the last month for my own curiosity than anything else. All were tasted direct from the container with no oil, salt, nor bread added. I hope it’s of use for everyone else as much as it was for me.

In terms of broad generalizations, absolutely all of these gazpachos were lacking massively on the garlic front. This is probably due to a Spanish public that, despite generations of people loving garlic (gambas al ajillo? allioli?) now that people are buying so much of their food pre-made, their tastes have been “blandized” with more boisterous, authentic flavors, being seen as being unpleasant. This is no better shown by an online review of a Thai restaurant I saw near where I live that said, “Too spicy, one star!” I don’t know why these gazpachos were so light as there also exists a “suave”* sub-category which has been made even less flavorful for those who find garlic or “flavor” in general unappealing.

You’ll see that the market-dominant gazpacho, “Alvalle” scored dead last. This was a shock as it’s extremely popular throughout Spain but in comparing it to the others, I just found it watery, flavorless, and holding flavors of green vegetables far too much. I have a mild irritation to green peppers that kicks in after having some Alvalle, so I have to assume they use less tomatoes and a lot more green vegetables as they’re cheaper.

* Side note: avoid any and all foods in Spain labeled as “suave” as they’ll be the most bland, flavorless crap you can imagine and in the case of the olive oil, truly unhealthy as it’s not extra virgin but ultra-refined low-grade olive oil.

Ferrer Gazpacho
Smoky red pepper with a touch of beet and other earthy notes, green notes more downplayed, softer and riper. Balanced red veggies in the mouth with an acidic tang in the finish. Perhaps runs a touch saline and tomato skin-like but still very enjoyable.
2.75€/l
**/***

Carrefour Gazpacho Classic
Smoked red pepper and ripe tomato, very light green vegetable notes of cucumber and a fresh briny aspect, runs a touch earthier as well. More red veggie dominant on the palate with the smoky red pepper notes balanced by the rich tomato notes. Thick texture, a touch of saltiness slips through but also has good length and this general sense of “fullness”.
1.33€/l
**/***

Lidl Chef Select Gazpacho
Red pepper aromas initially but backed up by cucumber as well as some root vegetable aspects, salty, briny character. Very creamy in the mouth with a lot of width, more similar to Salmorejo than Gazpacho, stays full into the finish but gets a bit dominated by the green veggie notes. Main critique is that it tastes a too processed and lets you down in overall finish that’s more oily than fresh.
1.45€/l
*/***

Spar Gazpacho Tradicional
Green veggies notes of pepper and cucumber, quite light overall. Quite hollow on the palate, lacks any real intensity or spice.
2.50€/l
*/***

Alvalle Gazpacho Original
Less smoked red peppers and more a wet tea leaf note with a bit if chives, cucumber, and a lot of green veggies, green pepper stands out more. Definitely watery and loose in the mouth, lacking any red vegetable spice and much more green and faded into the finish.
3.00€/l
0/***

5 responses to “The Great Gazpacho Tasting 2020”

A recipe for pancakes in Metric