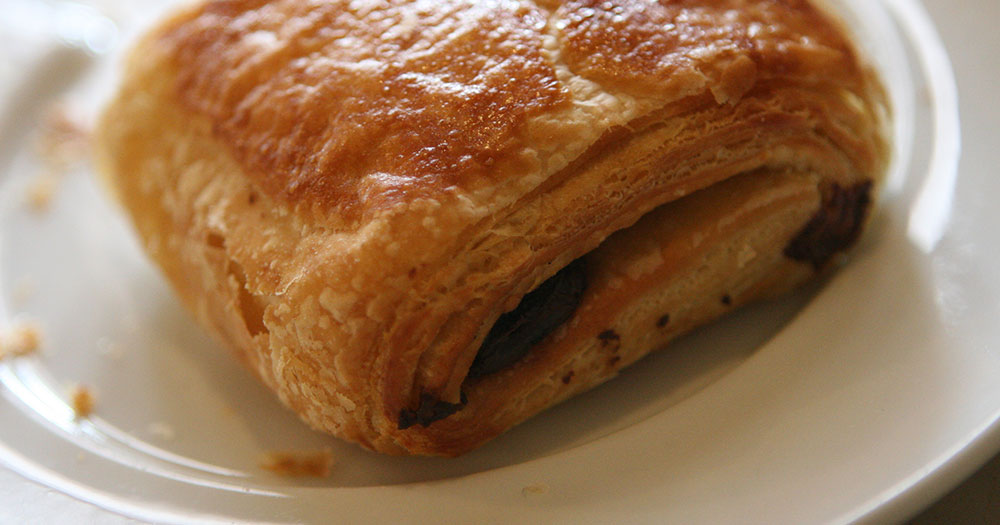 Not a croissant but still amazing from Patisserie Nouvelle

The Best Croissants Outside of France: Part I

To be honest, I have no idea if there will ever be anymore parts to this series, but I just wanted to leave the door open to it, since I have a lot of world yet to see. I mean, let”s face it, if you had a croissant in a Parisian cafe and then you return home to have whatever croissant might be available, you’ll most likely want to spit out this foul piece of un-croissant you’ve just attempted to eat.

There are any number of reasons why foreign croissants suck as bad as they do. In Spain, it’s because they obviously hate the French and to spite them, they make croissants using pork fat instead of butter. Yes, you read that right.

Why they don’t just go the rest of the way and try to use olive oil to completely shit upon all that is holy about the croissant is beyond me, but they suck in Spain. It’s much the same in the US where, instead of pork fat, we use some mutated series of chemicals instead of real butter and end up with a very similar, Spanish-like derivation of the croissant. Blarg.

So, what follows is an extremely short list of where to find good croissants when you are not within French borders. I hope it somehow proves useful or at least inspires to always strive for the “best” when choosing croissants.

Hands down, it’s Patisserie Nouvelle. While I doubt many sane folks will be hopping a jet anytime soon just to “kick it” in Kinshasa, they have fanatically good croissants as well as pain au chocolat in that little shop.

I’ve tried many a croissant in this region and come to the painful conclusion that pork fat does not a good croissant make. They’re always dry and make me wonder as to why I just don’t eat bread instead of these croissants as it would be a lot less painful. The exception are the croissants that they serve at La Plaça in Madremanya. The chef there is a smart guy who says, “If you have a good, fresh orange juice and a good croissant, your breakfast is pretty much done.” The croissants are delectable and perfect, even better than some I’ve had in France. Chef Vicenç isn’t too forthcoming about where he gets said croissants, but they are indeed made in Spain and are unsurprisingly made with butter, not pork fat. Molt bons!

Pastisseria Ochiai came highly recommended as well, but when I tried them, I wasn’t that amazed and I think of this more as a sweets shop than a croissant destination.

In Barcelona however, the best all around option is really, Baluard. They’re definitely not cheap, but they are available in both a standard as well as white-chocolate dipped version and they’re absolutely delicious.

If looking to go completely decadent however, then your destination is Hofmann where the mascarpone croissant as well as the raspberry are just stupid good and delicious. But, even the standard croissant as well pain au chocolate are expertly done.

You can’t beat Des Gâteaux & du Pain. While definitely an expat crowd shifts through its doors, there are plenty of Ivoirians that head there as well, especially to have a snack on the expertly-made breads, sweets, and yes, croissants. Go for the air conditioning, stay for the baking.

The immediate choice by many would be one of the many Boulange shops, but it is not to be. Boulange is okay, but it does drift in to being rather bland, flat, and if you ask for a pain au chocolat, the staff have no idea what that is (“Oooooh, a chocolate croissant!” #facepalm). Sure, they’re better than Costco croissants (as is huffing paint), but they sure ain’t better than Pâtisserie Philippe [sadly closed down]. It’s not a huge surprise that Philippe was originally a chef for Boulange, who have obviously ignored all that he did there.

That’s about it for this initial list. We’ll see if I have more to write on this someday. If I make it to Haiti or Tahiti, where I heard the bread is great, it will make me wonder if the croissants follow suit.