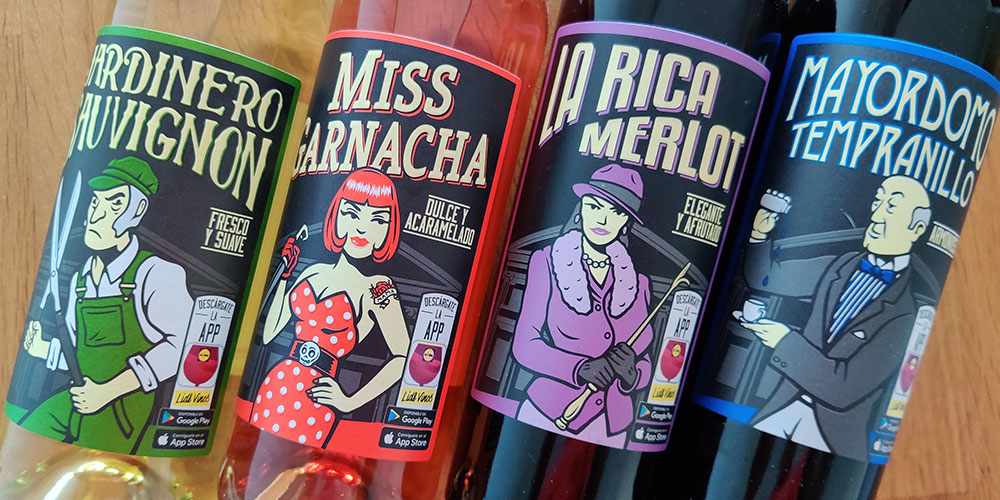 Spain has no problem selling its wines… as long as they’re “a good value”.

This has become a double-edged sword given that the common perception, especially in markets like the UK, is that Spanish wines should always be cheap. Thankfully there’s been a movement in the last 20-30 years for a number of producers to make top-end wines that show off just how excellent a great many corners of Spain are in terms of growing high-quality grapes.

It’s a lot of work to pursue this avenue however as anything above 5-10€ retail in Spain (depending upon the region), is a harder sell. Because of this there are still many who do not attempt to reach a higher or even mid-range market. So you arrive to what’s seen here, this series of wines from Lidl that hold a final retail price of only 2€ thus continuing in the “bargain Spain” tradition.

Subscribers can see the full reviews of the wines below but the general premise with these wines is that they’re not at all horrible. I’d gone into this purely out of curiosity and to see what 2€ can buy in a supermarket in Spain and they’re all wines that I’d group under the “drinkable” umbrella. When tasting them, at no moment was I gagging or thinking that they should have never been bottled.

I didn’t score the wines terribly high but again, they’re well made for what they are at this price. Even at 5€, more than double their price, I wouldn’t find them to be out of line to be honest.

Out of them, it was probably the Sauvignon Blanc that could almost nudge into Bronze Medal territory. The others, not. My main issue is that they seem to be quite acidified which isn’t surprising as the producer was going for fruity as well as “fresh”. I definitely could have done without the oak chips in the Tempranillo as a wine smelling like a truck full of sawdust crashed into the tank isn’t what I’m looking for.

My initial reaction when seeing the wines a few months back was, “Jesus these look stupid.” And then there’s the question as to why the rosé had to be ‘Miss Garnacha’. I suppose it’s slightly less offensive than other options but then I realized that the images are to be taken together as a whole. There’s some kind of allusion to the board game “Clue” (“Cluedo” to anyone outside of North America) as you’ll notice that each of the characters has some kind of malicious intent and don’t look pissed off just because they’re characters in some bargain basement supermarket wine scheme.

I’ve no idea as to how this fits together as you’re to download the “Lidl Vino” app and then point it at the label for some kind of augmented reality thing. I could never get it to work and I suppose my life will be the poorer for it.

Beyond the labels, the bottles are pretty standard with clear for the white and rosé and then dark for the two reds. The bottle for the Tempranillo was slightly heavier than the others to of course infer that it’s somehow classier despite costing 2€ and being from the same vintage, 2020, just like the others.

I can usually put labels aside unless they’re truly offensive. The real issue in wines like these is that someone along the line is getting screwed in this pricing and it’s not the supermarket or producer.

With a 2€ retail price, that means if you deduct the Spanish sales tax of 21%, the actual price is 1.58€. Let’s be generous and say that Lidl is getting 40% off this price by the producer Vega Eslora (which seems to exist in name only) who is then being paid 0.95€ by Lidl.

So now we’re down to less than a Euro per bottle and out of that the producer needs to pay for a bottle (probably around 0.15€) and a cork which in this case are Nomacorc and Diam (both probably around 0.19€) which brings us to 0.61€. Let’s assume that they’re also making some money off this and put that at 0.20€ a bottle as it’s all about volume. In this remaining bit that’s 0.41€ of change, there’s the cost of making the wine, transportation, and of course, the grapes.

These wines aren’t made within any DO, nor Vino de la Tierra, nor any other certified point of origin, although the label does state that they’re from Spain. Based upon the pricing, scale of production, and varieties, I would warrant that the wines are coming from Castilla y León. It’s a region in Spain that’s bigger than Portugal and produces billions of liters of wine each year.

Once you factor in all of these details, I would have to estimate that the grape growers are receiving less than 0.20€/kg. To achieve that, they’re producing the grapes in as mechanized a fashion as possible to reduce costs and they’re most definitely not working organically.

Is this sustainable for the grower? As shown by the prices Cava is paying for grapes, no.

Is it sustainable for the planet? In case you don’t know the answer to that, have a glance at the news from pretty much anywhere these days.

This is the real issue in Spain’s continued production of wines such as these. They may offer some immediate gratification for the purchaser who doesn’t mind having an evil gardener or malicious vamp staring at them while poolside, but it’s a price that’s simply unsustainable. Also, these wines are but one example of this overall trend. The average price for wine in Spain in 2019 was 2.87€ so clearly, cheap still rules the day currently.

Is there a solution? Until people abide by the “less but better” mantra, it doesn’t appear that there is unless enough grape growers realize that you can’t survive on these prices and they just stop growing grapes. That would be an interesting turn of events given that all large-volume wine producers always think they can squeeze the viticulturists and they’ll just take it, but they may readily find that if you squeeze too hard, the grapes will dry up.