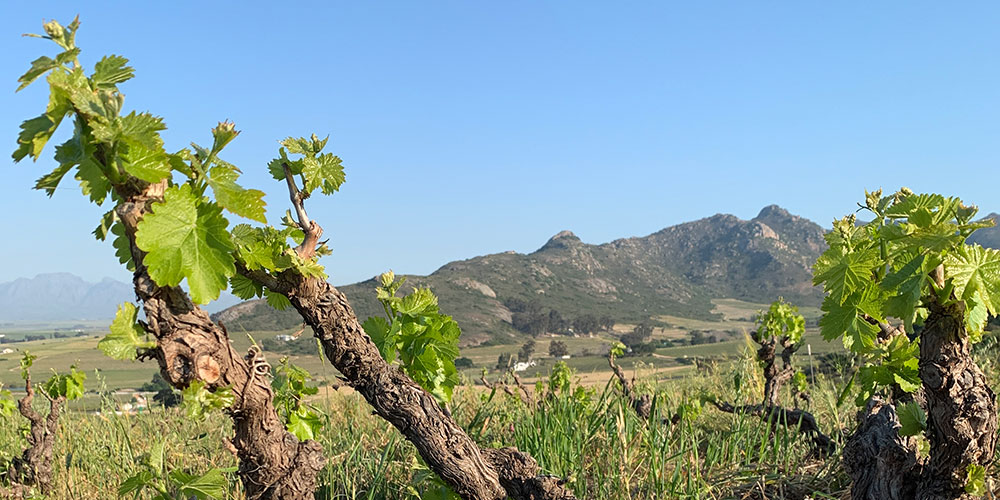 From Cape Chianti to hero: Grenache in South Africa

“I grew up with Grenache,” shares South African wine legend, Jan Boland Coetzee. His pale blue eyes focused on the verdant Swartland hills from our vantage point on Adi Badenhorst’s porch. The crops and vines were lush from the wettest Cape winter in many years. “My grandfather planted it in the Piekenierskloof, my nephews still farm there today.”

Grenache held something of a dubious honour back then. It was planted for its ability to deliver big yields, it was used as a blending component to fatten out ubiquitous Cape blends, and sometimes even used in brandy base wine.

On the edge of the mountainous Cederberg, Jan cites the Piekenierskloof as his ancestral homeland. The first Coetzees were said to have arrived in Table Bay in 1679. The family settled in Stellenbosch by 1682 (today the farm is known as Coetzenburg) and at the end of the 1680s, the Coetzee diaspora scattered to both the West Coast and to the Piekenierskloof.

Growing up, Jan split his time between the coast’s weather beaten fishing villages and his grandfather’s interior farm where the Grenache flourished. Because of this, he still sources Grenache from old vines here for his Vriesenhof wines (a property in Stellenbosch), from which he produces a rosé, a blend with some Mourvèdre and Shiraz as well as a single varietal bottling. Though seemingly impossible to prove Jan insists plantings go even further back than his grandfather’s saying that the Spanish import has been cultivated in the Piekenierskloof since the 1700s, with even Napoleon being said to have enjoyed sweet wines made from it.

A few centuries later – and a 50 kilometre’s drive south is Adi Badenhorst’s farm Kalmoesfontein. Adi is Jan’s son-in-law, and as fate would have it, both men are vital in the Cape’s story about Grenache. While Jan is the Cape’s original hipster – seeing the potential of the grape long before it became trendy, not to mention he’s worn veldskoens way before the likes of Ashton Kutcher. While Adi’s farm has the honour of guarding South Africa’s oldest surviving site of the variety, a single-vineyard of bushvines named Raaigras, “ …it rhymes with Rayas,” quips Adi. (Château Rayas, Châteauneuf-du-Pape is one of the world’s most famous varietal bottlings of the grape.) 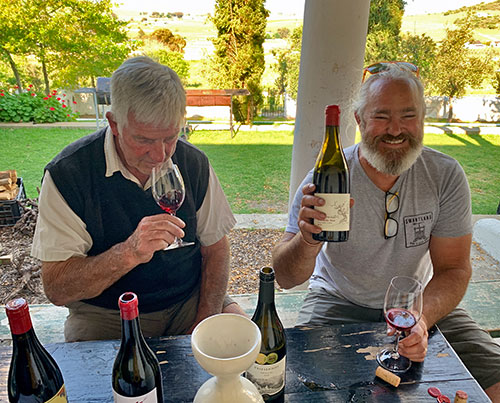 Grenache (or the Pinot Noir of the Swartland as some have dubbed it) was once so prolific in the Cape that it was commonly put in a blend called Cape Chianti. Made by the Citrusdal Co-operative, it was usually a blend of Grenache and Cinsault, the Cape’s other historic grape.

If Jan is to be believed – and I do believe every word – Grenache has its roots deep in South African winemaking culture, particularly in the dry, hot, interior places like the Piekenierskloof, where the variety thrives with its love of heat and natural disease resistance.

Grenache craves the sun like Britons flocking to Spain on holiday, and here on the tip of the African continent solar rays are an infinite resource. Many SA producers are waking up to the adaptability of Grenache under the southern sun, and today there are 422.9-hectares planted with some 1,211,566 vines with many more plantings underway.

Rooted up above us in the Raaigras vineyard are 1,249 of those vines; Adi has counted each and every one. But before we went to see the site, we had some wines to try, a selection that illustrates the versatility of the grape.

We tasted the 2017 and 2016 vintages of the Vriesenhof Grenache. Here the wines are dark, layered, long-lived; an intangible sense of history stokes the imagination. The ’16 a touch riper, more generous, while the ’17 is all vivid clarity and mineral acidity.

The AA Badenhorst Raaigras 2017 is riotous – a bombardment of fruit, and just when you think you have a handle on it, more layers are revealed. Kaleidoscopic, there’s a certain magic in its old vine chemistry, like a magician who pulls flags out a hat, something new keeps appearing.

We veer off into the brighter styles, wines trapping both freshness and sun. The Momento Grenache Noir 2018 is on the elegant side of this spectrum, gentle handling of the grape – punch downs are truly manual in that winemaker Marelise Niemann’s uses only her hands – has expressed the more fragrant, floral side of Grenache, the fruit cool and tempered, a sense of restraint and calm.

The Spider Pig Grenache 2019 is the other side of this coin, crunchy and vital, packed full of energy. The wine brand is a project between Dave Wibberley and Dave Nel, both work in various arms of the wine industry, and their Spider Pig (yes, named after the infamous Simpson’s cartoon) wine project sources grapes from across the Cape Winelands, Stellenbosch in the case of the Grenache.

It’s time to meet Raaigras, and hear what he has to say. “Grenache is a grape full of stories,” says Adi. “If planted in the right site and farmed well it will tell you exactly where it’s from.”

We curve up the hillside in Jan’s Land Rover, the bucolic scenery a shuffling deck of cards below us and the meet and greet doesn’t disappoint. Raaigras holds dominion over the Swartland, 12 rows of thick, gnarled bushvines are magisterial in their prominence over the valley, like wooden crowns stark against the distant mountains – its nobility here undisputed.

It’s something close to a religious experience walking amongst the vines, the juice still tingling in my blood. It gives me the sense that yes there are many stories to tell, archives to dig around in, but more importantly it feels like South African Grenache has arrived.

Climate Change is rapidly modifying the way we farm and it’s evident the variety flourishes here. Working to combine historic old blocks and with new plantings on the rise signal we’re at the start of a new story for Grenache, perhaps finally its moment in the sun.