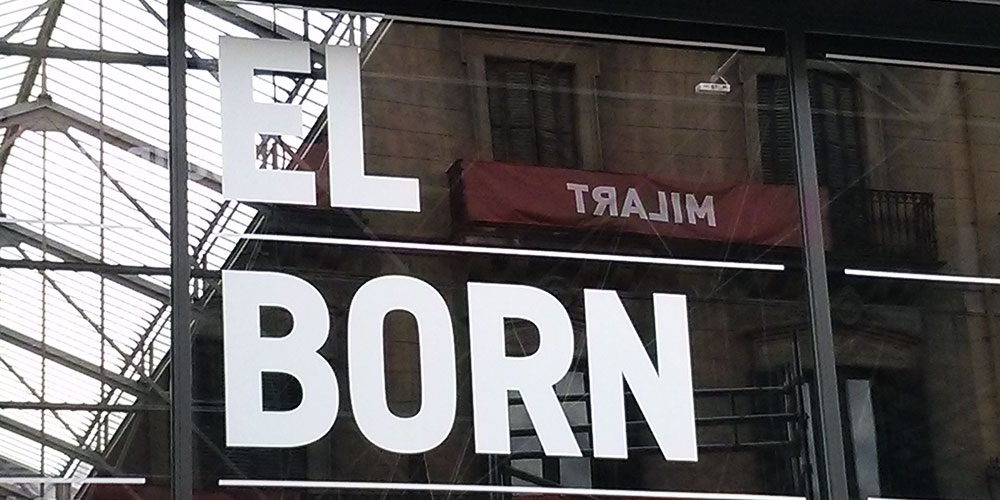 For those who aren’t yet aware of the fact, Barcelona–and for that matter Catalunya as a whole–is officially a fully bilingual region no matter what right-wing Spanish media says to the contrary. This seems to be a rather gigantic shock to those who come from abroad to live here because when finding that Catalan is indeed a valid and these days, heavily defended language, these foreigners then get incredibly pissy. Much akin to, “The only problem with Scotland, is that it’s full of Scots.” many foreigners who made a conscious decision to live in Barcelona at times say, “It’s great except for the fucking Catalans.” To which those of us who accept and adore the place often find ourselves thinking, “Barcelona is great except for all the assholes living here who hate Catalunya.”

This never-ending problem will probably only be solved if Catalunya were to someday become an independent nation but the most prevalent and unavoidable manifestation of this comes in terms of the language. Foreigners in Catalunya almost always stick to speaking Castilian and do it generally poorly at that. A few, such as myself make the effort to learn Catalan. Despite trying to talk reasonably about it, I will probably need to have all sharp objects taken out of my possession the next time I hear someone who doesn’t bother to learn Catalan tell me, “Well, Castilian is just more useful.”

So, it seems a more worthwhile pursuit therein is to join in trying to stop the dumbining of Catalan words and place names. Much like Barcelona/Barthelona, the amount of times I hear or read “Barri Gótico” instead of either Barri Gòtic/Barrio Gótico are innumerable (first is Catalan, second Castilian). Or then someone telling me in English, “Yeah, I’m going to be in Eixample once this taxi reaches Paseo de Gracia” is just auditory rape as if you are going to call Passeig de Gràcia, Paseo de Gracia in Castilian, then you need to call, Eixample, Ensanche. To put this in to more English-centric terms, do you say, “When I get out of the subway I’m heading for my lorry.”? No, no you don’t because you sound like an idiot if you mix English dialects so picture how much worse it is mixing fully separate languages.

By and large, these language offenses are restricted to arrogant foreigners who deem themselves, “expats” or the worst of online travel writers which is to say, every online travel writer. The one big exception to this is the neighborhood of “El Born” where I lived for two years and know very well.

Let me start by saying that this neighborhood doesn’t technically exist. It does in imagination as again, all and/or the worst of online travel writers will often call the entire neighborhood on the other side of Via Laietana, “el Born” which it’s not. In reality, Born sits underneath the Ciutadella park as it was outside of this neighborhood that people think of as Born today.

“El Born” of imagination is actually la Ribera and it along with Santa Caterina and Sant Pere form the three official parts of this neighborhood located between Barri Gòtic, Barceloneta, Parc de la Ciutadella, and Eixample Dret. But fine, I can accept that la Ribera is now “el Born” as it has had other names and was called Vilanova de les Arenes before it was la Ribera, but this historical context is important.

What does “el Born” mean? According to the Catalan dictionary it means several things but the definition of it being “a place where tournaments where held” is the most interesting as that’s what this area outside of la Ribera that now sits under where the Ciutadella was. Maybe it’s derived from the French word, “béhourd” which is a type of old Medieval tournament like were held in Born in days of yore. Also ironically, this more commonly known, “béhourd” was actually from the Old Germanic word, “buhurt” which makes me wonder if “butt hurt” in modern colloquial American English got it from there, but I digress.

I still don’t understand how we come to “el Borne”. This word is used by those speaking Castilian and much like Brad Pitt in The Mexican it’s completely misused word. As many English speakers stick an “o” on the end of English words to make them “Spanish-y”, so too will the Spaniards make Catalan words more “Castilian-y”. I bring this up as one of the other definitions of “born” in Catalan is a terminal for connecting an electronic or mechanical device. It just so happens that this is also a definition for borne in Castilian. It’s also the tip of a lance, but note that it’s not the place where people would joust. In other words, it’s a false friend like with English speakers who think “exito” in Castilian means, “exit” in English.

So why is this significant? Because it means that el Borne is an uneducated mistake of a place name to use. It hurts my ears to hear it. By saying “el Borne”, it speaks leagues as to how you live your life in Barcelona which is to say, you are completely unconnected to the city, probably only existing in this foreigner “expat” community despite “love, love, loving Barcelona”.

Thankfully, this is one sense where the correct name is generally winning (these don’t happen that often) as “el born barcelona” has some 172k search results while “el borne barcelona” has less than 7k results as well as Google digitally bitch slapping you with, “Showing results for el born barcelona” when you initially try to search for the latter. So get hip, understand Barcelona bit better, maybe even learn Catalan if you’re planning to stay for awhile, and for the love of god, stop calling it “el Borne”.