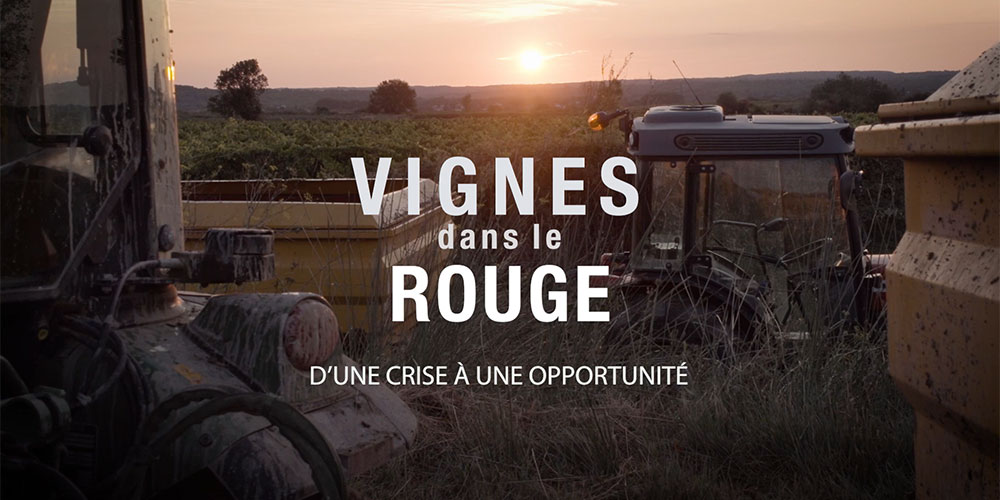 I recently had the pleasure of viewing the new documentary, Vignes dans le rouge at this year’s Most Festival–one of, if not the only film festival in the world dedicated to films about wine.

“Vignes dans le rouge” (‘Vineyards in the red’) is at its heart, a film about Climate Change and the viability of winemaking in the future. That’s a massive topic to tackle of course so instead of talking in broad strokes, they wisely focused on a few producers in a corner of the Languedoc region of France and filmed them during the 2018 and 2019 harvests.

Why these two harvest? Because they encapsulate the extremes confronting viticulturists these days, with 2018 being extremely wet and disease ridden while 2019 was exceptionally hot and dry. These two vastly different years couldn’t work better to show the contrasts of what people growing grapes are up against. And it’s not just in Languedoc as these problems could be found throughout the regions of the Mediterranean during these years. Outside of Europe, similar problems related to the extremes of Climate Change are also being encountered with regularity around the world such as the massive wildfires in Australia and California.

The film delves a bit into the past to show the arrival of vineyard diseases to Europe over a century ago and how this had a massive impact on winemaking in the continent. It also talks about how viticulture used to look a great deal different half a century ago. For anyone in the wine world or who is aware of the history of winemaking, this part of the film is going to make for some repetition, but knowing about phylloxera, odium, and mildew is crucial information to set the stage.

In between the historical segues, we’re introduced to various grape growers in the region and are shown how they start out each of these two years with optimism, only to have their dreams crushed by forces far outside their control. The worst part is that they’re killing themselves throughout the year with extra work to try and produce a crop, only to have it fail in the end. “Let’s close the doors on the hearse and bid farewell to this tiny harvest” a group rightfully says after scraping out a pittance from a vineyard in 2019.

We’re all probably quite tired of doom and gloom documentaries about Climate Change at this point. They’ve shifted from informing us of the problems to making us feel powerless to affect change as it’s clear to see that despite decades of visibility and awareness, inexorably things continue to get worse.

This is thankfully one of the film’s great strengths in that it delves into solutions and positive change as well. The filmmakers talk to people at the INRAE where they’re doing all kinds of important research such as collecting and analyzing various vine clones as well as breeding hybrids (part of “PIWI“) and crosses for potential use in the future.

There’s also a great deal of talk about how French viticulture was in fact dominated by hybrids in the mid-20th century until they were deemed “inferior” to the classics such as our great friend, Cabernet Sauvignon. The thinking has come back around to giving them a fair shake as in a very poignant scene, one of the guys researching this aspect of incorporating hybrid vines to combat the problems is standing between two rows of vines. One side is a classic variety which has been ravaged by mildew. The other is a hybrid that’s in perfect shape despite the inclement weather of that year.

They also talk to those working in experimental vineyards where they view them not only as a field where grapes are grown but as a whole ecosystem, realizing that anything you strip out or kill (trees, weeds, insects, etc.) is going to have a damaging effect on the entity as a whole. This isn’t a new concept of course as it’s basically what permaculture is and also a foundational premise behind biodynamic farming, but in the film they show how they’re taking this to an extreme in some vineyards and finding good results with excellent soil health giving life to the vines–and importantly, how large producers are seeing the benefits as well.

There’s also a brief, yet quite interesting mention of growing vines on trees as was historically done as well as incorporating more trees in the vineyards for partial shade. This of course runs contrary to the current concept of clearcutting any land where you’re planting a vineyard for maximum sun exposure for ripening.

Overall, it’s a very well shot, structured and developed film that is also enjoyable to watch as it doesn’t fall into the inevitable “doom and gloom” approach of so many others dealing with Climate Change. In addition to laying out the problems very clearly, it also offers potential solutions and dare I say, “hope” along the way. The only criticism I have for the filmmakers is that there’s really only one woman with any screen time in the entire film and it seems like it was just because she works with one of the male winemakers. And this, when you could plainly see a good number of women in a scene where they film the sessions of a “Clima-thon” where people met to workshop various ideas about Climate Change.

I have to really scoff at this portrayal as in the French wine scene (and particularly the more experimental, boundary-pushing scene) there are many, many women winemakers as well as many who are working to research scientific solutions for the problems caused by extreme weather years. That was definitely a failing by the filmmakers and something for anyone to take note of in the future as in this day in age, presenting wine in a “boy’s club” fashion is not only a bad look that detracts from the overall message of your work but it’s also simply not accurate.

Overall I highly recommend searching this film out if you can. Maybe it’s coming to a film festival near you or maybe it will be available on a streaming service. However you can encounter it, it’s an hour and a half very well spent with plenty of food for thought.

2 responses to “A review of “Vignes dans le rouge””