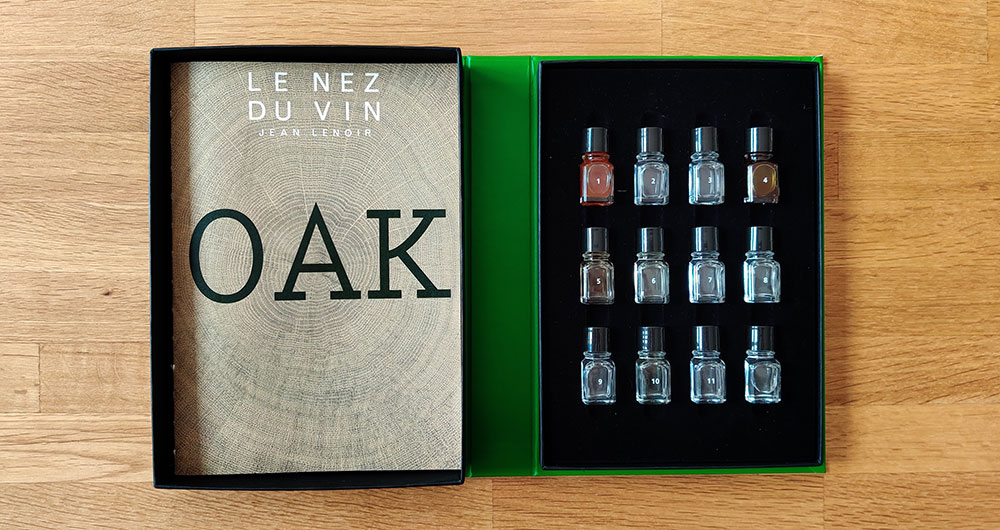 For those not familiar with Le Nez du Vin, this is a series of aroma and learning tools created by, Jean Lenoir, a Frenchman originally from Burgundy who has been a wine educator most of life. The goal is to give people a core breakdown of aromas in complex liquids via little vials reminiscent of perfumes as seen in this latest release, aptly called, “Oak“.

While the “du Vin” in the name would lead one to believe it to be all about wine, they’ve also created these for coffee and several spirits as well.

People might ask why one needs to have a vial of “cloves” or “vanilla” in a suspension liquid when one can just go out and smell these aromas at a grocery store. The truth is, this isn’t possible for everyone given that the core base aromas we reference in wine are inherently European in origin, so some of them might not be available in some parts of the world.

Then there’s the issue, as seen in this “Oak” edition that just the real world smell isn’t adequate as something like “clove” or “coffee” in wine is not exactly the same smell as if you were to walk into the spice aisle or local Starbuck’s. There’s a difference and a change to the smell when it comes to how it pertains to a barrel or say, in a medley of aromas in a finished wine.

I could have used this “Oak” kit over a decade ago when I was trying to refine my understanding of “vanilla” vs “coconut” as a wine aroma given that the latter is the supposedly classic way to tell when a Spanish red is from Rioja (although this is rapidly changing). After a lot of frustration, I finally found a producer that made the same wine aged in French oak and another in American oak to be able to smell the difference in a controlled manner. This also gave me the excuse to drink a couple of good wines, but when they were gone, how can you go back and calibrate? This is another strength of these vials.

The 12 of them that come with this kit do an excellent job of breaking down core aromas found in oak-aged wines. What people might take issue is that the smells are simplistic and direct, but that of course is the point in that you’re to smell each of these and understand each core smell before then stacking them together. It’s a method to all this wine madness that works quite well. I’d say my only complaint with the vials is that the more complex ones, such as #1 need to be shakien quite a bit before opening otherwise you don’t get the full intention of the constructed smell.

The vials would be fun on their own, but they come with corresponding cards that explain what you’re smelling, what’s composing the aroma chemistry, and what they used to create it in the vial. All very clever and effective.

And then there’s a very nice 50 page booklet that goes into a great deal of depth as to the background of growing oaks, harvesting them, and making the barrels. This is all very well done and there’s a lot to take away, even for those who may have learned all about barrels awhile back. I know I learned a number of things I didn’t know as I’ve never fully delved into the depths on barrels before and also, I’m now aware that there’s a small barrel of 93 liters in the Rhône called an anée.

I was admittedly a little disappointed with the binding quality of the booklet as there’s a lot to go back to in there when one has oak and barrel questions and it’s much more than simply an instruction pamphlet that you’ll read once. I’m not sure if it was just that I received a review copy but the quick stitch binding could have been a bit more durable as this kit does cost 75€.

Otherwise, the content is high quality and while originally written in French, the translation was very well done by British translator, Louise Hurren based up in Languedoc who specializes in wine text translations. Thankfully such people exist as shifting meaning from one language to another in wine isn’t easy!

Ultimately, I can’t tell you if this is the kit from Le Nez du Vin you’re looking for or you want the “Master Kit” which as far as I can tell has all of these vials and a good deal more albeit at 300€. But if looking to zero in on just the specifics of oak, then “Oak” is a great kit to look into, or perhaps consider as a gift for any burgeoning wine expert you might have in your midst.

(In addition to this kit, if you wanted to check out even more details on oak, have a read of Kelli White’s fantastic article from 2017 on American oak.)

Review copy provided by the maker