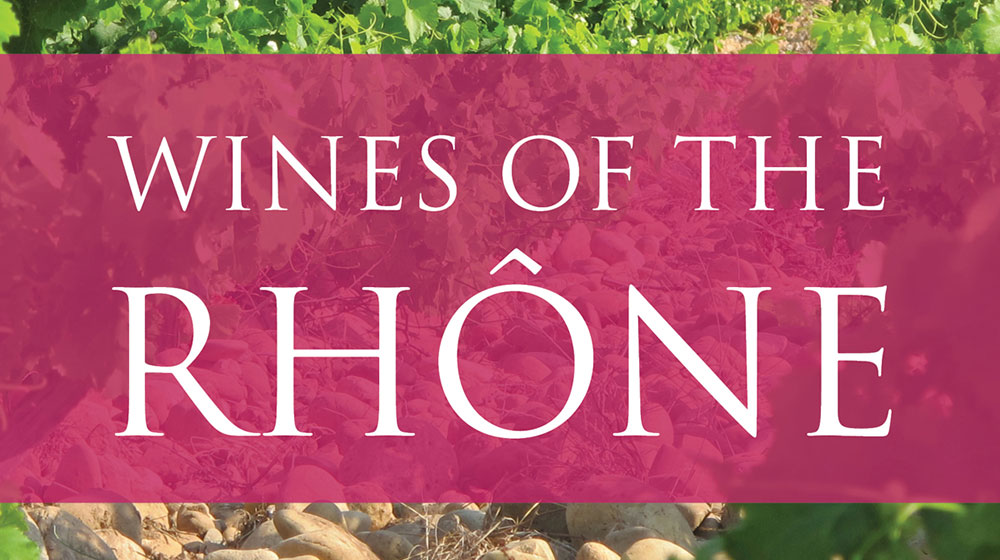 If you’ve been around the wine blogging scene for any amount of time, you’ll know that “success stories” are far and few between which is why Matt Walls’s new book from publisher Infinite Ideas, Wines of the Rhône is such a welcome triumph.

I fully admit that I know Matt quite well via encountering him at wine competitions as well as asking him random questions about Rhône wines from time to time given that there’s literally a tremendous amount of shared grape DNA between the Rhône and Catalunya. I consider him not just a colleague, but also a friend and so you can take that into account when reading my review.

Their stay wasn’t just a one or two-month affair as is often the case when writing an in-depth book, but actually two years. I think I caught up with them somewhere in the middle point and I have to admire Matt’s energy to keep up visiting the entire region as it’s some 200km in length with more than 30 appellations. Having researched books in the past, I know I wouldn’t have been up to such a Herculean task, especially as Matt had his two kids with him as well!

You really have to make note of this period of two years as Matt wasn’t coming at this cold. He was already well known and established for specializing in the Rhône before he set off on this mad quest. He’s been writing regularly about the region on his own website as well as for Tim Atkin, eventually becoming the Contributing Editor to Decanter as well as Regional Chair for the Rhône Valley during the Decanter Awards. But even despite all of this, he still needed to spend this massive length of time in the region, interviewing producers and regional authorities to arrive at this incredibly-packed 360 pages of text.

I will mention first off that this isn’t a book for the casual individual who wants to peruse a little here and there about the Rhône. There are other generalists books about the wine world like the “World Atlas of Wine” that would better fit the bill as Matt hits the ground running with an assumption that you know wine production and have a general idea about the lay of the land. Despite his targeting a higher-level wine lover or the trade, there has clearly been a demand for a book of this caliber given that it seems to be constantly sold out on Amazon, requiring the publisher to do a another print run. Word, has gotten around.

From the start of the book, you’ll quickly note Matt’s fine writing voice in the text giving it character and depth. Even more so is this immersion in the region that’s added granularity and texture to round out all the fact-y bits. For instance in the grape variety sections, it would have been very easy just to grab bits and pieces from “Wine Grapes” or other sources (as many do) but it’s plain to see that this is based upon Matt’s actual experience with these varieties and talking to local winemakers to come up with an original, quite valuable point of view on them.

It’s the same with the appellation system chapter than comes next. If you want just raw facts and figures, then I’d recommend having a look at Guildsomm for such things. But here, I found not just the raw information but also a bit of opinion, ownership of the material and again, context to make them more than just names on a map to memorize.

From there, it’s a deep dive into the two main sections of the Southern Rhône and then Northern Rhône including great details on all the appellations as well as IGPs and something like 200 key producers. I can’t summarize this other than to say Matt has given inordinate amounts of information that will make anyone lucky enough to be in possession of this book, going back to it regularly for reference.

In the Southern Rhône, a good deal of page space is given to Châteauneuf-du-Pape and rightly so. It was essentially the original appellation, the one that those of us in countries that don’t rhyme with “France” are emulating. The detail here is great and covers CdP in plenty of detail, but what I like even more is that there’s solid coverage of Châteauneuf-de-Gadagne where Matt was based. I honestly really wasn’t aware of it that much and no wonder given that there are only six producers there, but it was still an interesting bit of information in the fact that it’s essentially a continuation of Châteauneuf-du-Pape albeit, without getting to use the Châteauneuf bit (Beastie Boys fans don’t worry.)

But I do want to draw attention to one item in particular and that’s the section on The Diois. This is a section of the Rhône that I hate to a certain degree as I’ve quite often gotten things about it wrong on exams as exam givers love to dip into it given what an oddball region it is. Gamay and Pinot Noir in the Rhône? Yup. One of the original pét-nat regions? That too! Of course, you only realize that it’s “weird” if you understand the rest of the Rhône, thus why it’s so loved in testing circles.

So it was a bit heartwarming to read, “Let’s face it: it’s a confusing range of wines that would benefit from clearer nomenclature.” So it wasn’t just me as it is hard to keep everything here straight. But, instead of dismissing it, Matt goes on at length explaining what exactly all this is and why Clairette de Die is the most important appellation there.

As we get up to the Northern Rhône sections, there’s of course a lengthy and detailed breakdown of Côte Rôtie including dismissing some commonly-held misconceptions such as the entire southern and northern parts being just the “Côte Blonde” and “Côte Brune” (respectively) when they’re but two lieux dits out of 73. The “dour” description of Ampuis is also quite solid as I was less than impressed with the village when I last visited. And, I appreciated the mention of organic viticulture, or more the general lack thereof as it was a bit of a depressing facet to the region that I hadn’t expected and more pressure should be put on producers to strive for organic given the rather high prices of the wines.

But even more so than the section on Côte Rôtie was the lengthy section on Seyssuel, which was once (and outside of Rhône nerds, still is) a rather unknown part of the IGP Collines Rhodaniennes. Seyssuel has popped up in articles over the last few years and it was great to read deeper and reference coverage of Syrah’s most northern outpost. Sure, it’s a similar born-of-the-ashes story that the case with Côte Rôtie a few years ago, but it’s really charged me up to do a more thorough tasting of the wines whenever I can get up there again.

Taking everything into account, I only have one criticism and it has nothing to do with what Matt has created, but more on the format of the book. Being a paperback edition that’s mostly black and white with a color photo inset and nearly 400 pages with everything taken into account, just my reading through the book for this review has already seen it get a bit dogeared at the corners. It makes me a bit concerned as to how it will hold up over time if read often which, I believe anyone who buys it will be doing. For future editions, perhaps Infinite Ideas could consider a sturdier binding or a cover with flaps?

Ultimately though, an exceptional book that shows Matt’s time well spent and his writing at its finest for what’s the best reference on the Rhône to date!