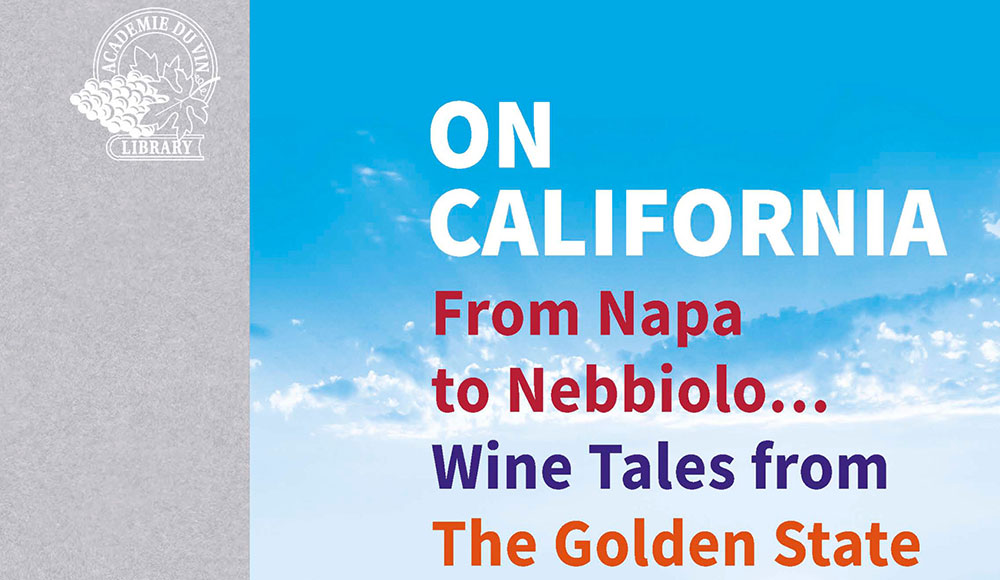 Following in the footsteps of, “On Bordeaux“, the Académie du Vin Library has now released a new book in a similar vein called, “On California“.

While Bordeaux and California are on opposite sides of the world, the scope of the books is very similar in that it’s a collection of writings by various authors (35 in this case) that covers a lengthy range of time of about the last century and a half. While very much Old World, if one is to really document Bordeaux’s rise, it actually follows a similar timeline as California. Toss into this the fact that Bordeaux is the source of Cabernet Sauvignon (the motor of Californian wines) and it’s easy to see that the two regions have a great deal more in common than one would think.

Indeed these inevitable comparisons are brought to life within “On California” via a good number of pages covering the “Judgment of Paris”, that exceedingly important moment in the history of wine for my home state. There’s an account that was originally written in 2006 by George Taber who was there to witness the “Judgment of Paris” as well as a piece by Steven Spurrier (with Patricia Gastaud-Gallagher) who was the individual responsible for the whole tasting in the first place. It should also be mentioned that Steven was the individual behind the Académie du Vin Library. Sadly, I think the piece in this book must be one of the last things that Steven wrote due to his unfortunate death earlier this year.

If one is looking for pieces that talk more about the technical side of California (as it is well known for its “technical” winemaking) then “Phylloxera Returns” by Norm Ruby as well as Kelli White’s “The Boffins, from Hilgard to Amerine” amongst others will very much satisfy you.

There’s also storytelling like the excerpt by Rex Pickett from his seminal work, “Sideways” that immediately jumps out for its exceedingly fine writing amidst a lot of well-written, but drier pieces covering history and regional comparisons. There’s another more narrative piece towards the end that I felt was overdone and out of place, especially amongst such a selection of fine writers, but I’ll let readers find that on their own.

And then of course the book is peppered with pieces from Hugh Johnson. To quote a writing friend of mine, “You just can’t have a wine book without Hugh in it.” I’d very much agree. Hugh has always had a warmth and meaningfulness to everything he writes which lights up the page. Perhaps it’s because he’s an expert gardener as well and so he sees more sunshine than other writers.

I mention all of this as I’ve read varying accounts of Agoston Haraszthy and know this loony Hungarian’s history well, but Hugh’s account really danced with the source material masterfully. It’s an excellent opening for the book but given that it was written in 1989 and revised in 2020, I’m very curious as to why “Yugoslavia” is referred to as it makes the text seem a bit out of date.

While an eclectic mix of pieces from a great variety of writers, it does come up the slightest bit short in some aspects. The main sticking point is that I think (but could be wrong) that Randall Grahm is the only actual Californian amongst all the writers. If you’re someone originally from the state, you can see that this is something very hard to make up for as people don’t adjust to a new environment like grape vines do and someone who is from say, New York but has lived in Napa for 30 years still talks about the state with this framing of not being from there and always leaves me with text that’s a bit distant.

Beyond this, I found that it’s a really massive scope to take on all of California which, if a country on its own would be the fourth largest producer of wine in the world. Despite knowing California’s lay of the land very well, there were times I was a bit lost in the text as it covers significant ground. It feels like just focusing on say, Napa Valley would have provided for more than enough material and given more an edge to the book overall. After all, previous to this was, “On Bordeaux” not, “On France”.

The reason I say this is because a story I feel is missing is the arrival of Francis Ford Coppola to Napa Valley. There simply is no story more Californian than when Hollywood stars start making wine. There might very well be other stories that one or two people felt should have been included but couldn’t due to the space.

I suppose the advantage in the end is that this book, which doesn’t lack for fine writing about wine, allows for a lot of other stories to emerge that people perhaps haven’t heard before as was the case for me with a piece such as the one on Edna Valley.

Ultimately, if you or anyone you know love what California can do in wine, I’d definitely recommend picking this up as, like all their titles, in addition to the well-honed text, it’s a smart, hardbound book printed on nice paper, in full color, for the price of £30.