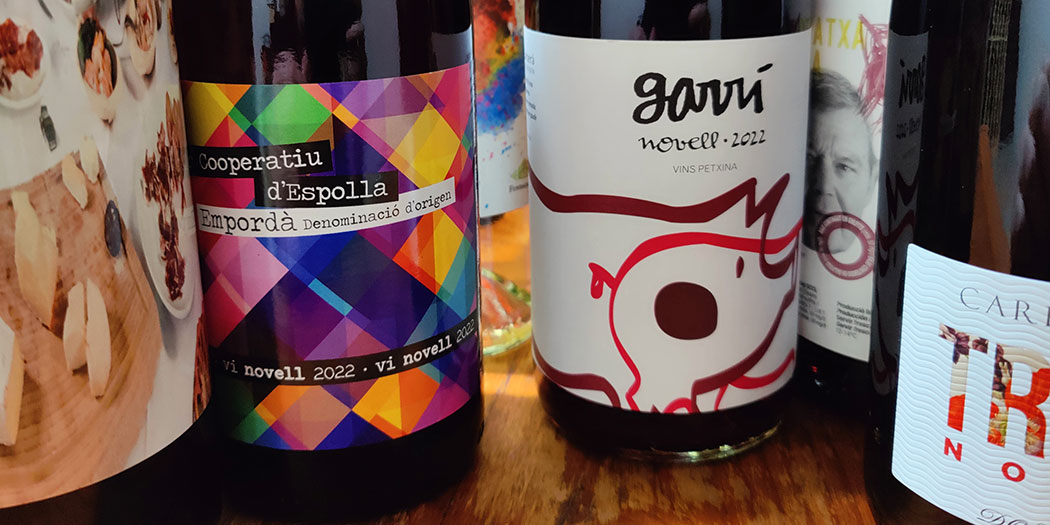 The Catalan Vi Novell class of 2022

It’s time yet again to take a look at the vi novell from Catalunya, the very first wines from the latest 2022 harvest.

You’re undoubtedly thinking, “Hold on a baguette-jabbin’ minute. The French cornered that whole ‘new wine’ thing decades ago with their release of the beaujolais nouveau on the third Thursday of November, so what are these imposter ‘new’ wines?”

France was never the only place where a new wine was being produced as the release of these super fresh wines would be in tandem with the slaughter of the pigs. In Spain, like elsewhere in Europe, this first half of November is usually chilly but still warm enough to enjoy the days so there was the added benefit of being able to get buzzed while you butchered outdoors.

For 2022, trends were bucked with some very warm days until December, but thankful we don’t need to rely on the weather for when we kill things to eat these days. I say this as historically, it made for the perfect moment to slaughter a pig and start it curing without any spoilage. In Spain, there remains a specific day to celebrate this act which is November 11th, the day of Saint Martin, a convenient patron of many winemaking activities.

For a long time, people looked down upon traditions such as these as too “peasanty”. But times have changed and people have looked back to these traditions with fondness and they’ve been revitalized. In the case of vi novell, it just seems to grow with each passing year.

So here we are with a set of wines that the group of elvinovell.cat sent me and the timing of this article isn’t by chance as they’re holding the first Festa de Vi Novell in Barcelona since the pandemic put the kibosh on such celebrations. For anyone in Catalunya now, it’s on December 10th at the Palau Robert and should be a very fine time.

As was the case last year, vins novells aren’t just red but also white as well as rosé. All in all, I feel like the reds are still the best option as fermentation with skins gives a bit more oomph that’s quite needed in such young, fresh wines. Some of the whites could come across as a touch diluted and the rosés just seem a bit redundant given that red wines in this style is nearly rosé by default given the speed with which the wines are produced and the generally light aspect.

What’s also interesting here is that this is the very first taste of the 2022 vintage.

To date I’ve only tasted a few unfinished tank samples and it’s a very curious year given that it was exceedingly hot and dry with so many heat waves I stopped counting somewhere around number five. Normally this would spell complete and utter doom for a vintage and yet, these wines show that it’s actually turned out pretty well. There’s nothing flabby or jarring about these wines and they show well, but I’ll delve into more details about 2022 a bit more in the future.

Ultimately, there are 15 wines below with full tasting notes and scores for paid subscribers. This is in fact a slight increase from last year and the number of denominations of origin has grown to now include DO Pla de Bages bringing the total represented to seven out of the 11 DOs in the region.

Not bad at all and let’s hope that the movement continues as it offers up a very affordable, immediate style of wines that’s great with pork and just about anything you could imagine, including turkey for anyone who celebrates Thanksgiving on an American timeline or Christmas on a European timeline.

The Alt Empordà fires and vineyards