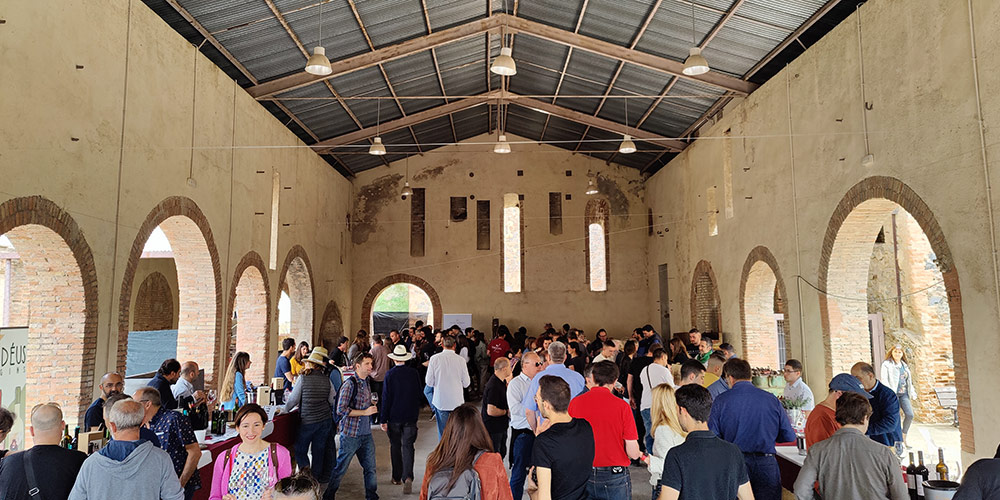 What is perhaps one of the biggest wine events in all of Catalunya or least the biggest for the Priorat region is the annual Fira de Vi that takes place on the first weekend of May.

As was the case with everything in 2020, it was canceled due to the pandemic. It came back in something of a still very much in the pandemic. Clearly people the world over are fed up with being careful which makes one wonder as to what the whole point of the last two years was, but I digress…

The week leading up to the fair, I’d been out of town as Bordeaux has moved their En Primeur event forward a month. This means that it now clashes with the Decanter Awards judging as well as the initial portion of Fira del Vi. I’ve been admittedly uneasy about attending any of these events but went to En Primeur as I was in a small group moving about and I kept masking up wherever I could.

Apparently the mix of being fully-vaccinated and boosted, having had the virus, avoiding crowds, and a massive dose of plain-old dumb luck has meant that things, at the moment, have worked out. After two post-En Primeur Covid tests, I appear to have not gotten infected (again), although another member of our group did, so the risk is definitely still out there and gave us all a good splash from the ice bucket of reality.

I returned to Priorat from France on Saturday morning of the Fira del Vi and I saw a sight that I’ve never seen before. It seemed like literally every square centimeter where one could park, had been parked upon throughout Priorat. I’ve been attending the fair for a decade now and I’ve never seen it so packed. Clearly, people wanted to go out and this was the event where people were going to throw caution to the wind.

But it wasn’t just my imagination. Official attendance statistics have come out and they blew all past events out of the water. In total they sold 7,000 booklets of six tastings apiece for 42,000 tastings. This isn’t to say that that many people attended as a “tasting” is simply one wine tasting at either: the booths set up in the county capital of Falset or at the wineries as they’ve maintained that vestige of the hybrid format from 2021.

The only other year that came close was 2017 when there were 37,000 tastings sold but the big change there was that it was over a three-day period instead of the traditional two so it further emphasizes how massive attendance was. In all the events that happen in parallel to the tastings, there were 30,000 attendees.

None of this comes as a shock as it’s one of the rare moments of the year to taste so many wines from the region. There were 70 wineries participating (there are about 150 in total in the region), 60% of which were from DOQ Priorat and 40% from DO Montsant.

Things aren’t fully back to normal of course for the fair as things get restarted poc a poc or little by little. Again, there’s still a pandemic risk but they also opted out of doing the professional tasting (I assume due to worries about international travel) and the Tast del Decenni as due to the insistence of holding it during the fair, there were only a half dozen wineries who wanted to participate and this needs to be rethought as to how they go about it.

I’m of two minds on the whole affair. I’m very happy to have the fair back (and finally make it to Tast de les Mines in Bellmunt as I didn’t have scheduling conflicts for once) but at the same time, I’m quite concerned that we’re going to have another jump in infection rates over the next two weeks like we did in the fall of 2020 as restrictions lessened. To quote a friend in the London wine trade, “You can’t hide forever”, but all of this seems potentially dangerous given that to date we’ve followed all the patterns of the 1918 pandemic. If we continue in this vein (and I’m sure we will), that means we’re going to have a horrific outbreak this winter which people will be very nonchalant about, don’t say we weren’t warned.

One small note in that despite the tastings in Falset ending on Sunday, the fair isn’t over.

Like they did last year, they’re continuing to sell tastings throughout all of May in what is a very welcome effort to push this event beyond the bounds of this one weekend or even one week, once a year. Lord knows the region thrives when people visit it, so, if continued, controlled visits remain possible all the better and hopefully, next year will see us be in a truly better situation in terms of the pandemic.