The town of Cariñena is quite literally at a crossroads. About a half hour southwest of Zaragoza in the Spanish region of Aragón, it sits on a rather vast, flat plateau around 500m in altitude. The region is very continental in terms of climate given that the whole town is comprised of two and three story buildings that seem to hunch into each other so as to avoid the hot summers but then stay bundled up for the cold winters.

There is nary a tree to be seen around the town, but grapevines, well, they stretch to the horizon.

The Denomination of Origin Cariñena is largely based here on this plateau and takes its name from the town. Also taking its name from the town is the grape, Cariñena–also known as Carignan outside of Spain. The irony is that this grape is but a mere 6% of the total regional production, with Garnacha coming out king at 27%, followed by Spain’s stalwart Tempranillo at 22%.

Given the total vineyard space being about 14,500ha, these percentages translate into a quite healthy level of production. Given that there are only 35 wineries in the DO, it means there are some very big producers making wines that are dependable, yet not often that notable.

It’s because of this, that when I was recently offered to taste a wine pack especially put together for a charity campaign against Covid-19, I was a bit curious about what I was going to be receiving. It turns out that those worries were misplaced and thankfully the contents of the box more than exceeded my expectations, offering some of the finest Spanish wines made from Garnacha and Cariñena that I’ve ever tried.

Grandes Vinos & “Over the Rainbow”

The producer of these wines, Grandes Vinos, has decided to make a special boxed set under the “Over the Rainbow” name with the intention of selling 20,000 bottles–2,400 in the boxed set and 17,600 as a Rosé (see below). The entire purchase price will then be donated to the charities of Médicos del Mundo and Yo Me Corono (a Spain-based charity researching a vaccine.) In addition to making and selling the wines for this cause, the winery has already contributed 50,000€ of their own money into the donation pool, meant to ultimately total 265,600€. If this is already enticing you, then go and buy it now. 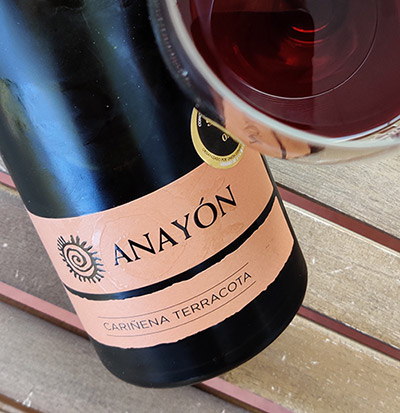 The wooden box I received had three wines in it: an old-vine Garnacha and two different Cariñenas also from old vines. I will be upfront that this is not a cheap box, being priced at 200€, but then again, all the proceeds are being donated to a very necessary cause, it’s a limited edition of 800 boxes, and what more, these wines are exceedingly choice and will not let you down. So if you are able to buy this, it would make a great gift either for others or… for yourself. So let’s have a look at them.

This is part of their World Winemakers Collection in which American winemaker, Joey Tensley collaborated in making this wine. Sourced from 64 year-old vines of primarily Garnacha with a touch of Cariñena and Macabeo vines, this wine blew my mind. It only sees three months in oak which has lent it a delicate, fragrant touch of spice along with an enchanting incense aspect that I’ve only found in Pinot Noir from Baden, Germany before. Beautifully aromatic and wonderfully complex on the palate. It’s ready to drink or can be aged another 3-5 years if you like, but whatever the case, a stunning example of Grenache. 95pts

Again, a team effort with winemaker Joey Tensley, this Cariñena from 44 year-old vines was a different take on a grape I know very well. Very red-fruit dominant with undercurrents of dark spices. Lovely tannic grip and stellar acidity on the palate. This is just starting to open up and I’d wait 1-2 years at which point it will just be singing. 92+93pts

Made from 41 year-old vines, they took a different turn with this wine, aging it in earthenware vessels as was done year ago. Again, a very red-fruited Cariñena that is super aromatic and expressive. It manages to have plenty of tannic grip which at the same time being open and ready to drink now. 93pts

As you can see, this is an excellent selection of wines and more importantly, they’re showing a unique flavor profile of DO Cariñena. The price includes shipping in Spain, but I’ve been told they can send elsewhere although you’d need to inquire at Wine is Social who is handling the online sales for Grandes Vinos.

Also in a tasty Rosé!

In case you’d love to participate, but want something quite a bit more budget friendly, they’re also selling a Rosé made from Garnacha that’s just 6€ a bottle and available in a handy six-bottle box just in time for the fast-approaching summer. As with the box of three bottles, all proceeds are going to their charities.

If any of this sounds interesting, please go and buy it now!

Disclaimer: I am receiving absolutely no commission nor any other form of remuneration for promoting these very delicious wines and hope this will be an outstanding success.

2 responses to ““Over the Rainbow”, a very choice Covid-19 charity pack from DO Cariñena”

“Carinyena”, the original Carignan now free to be itself

Wines outside the lines: Bodegas Frontonio