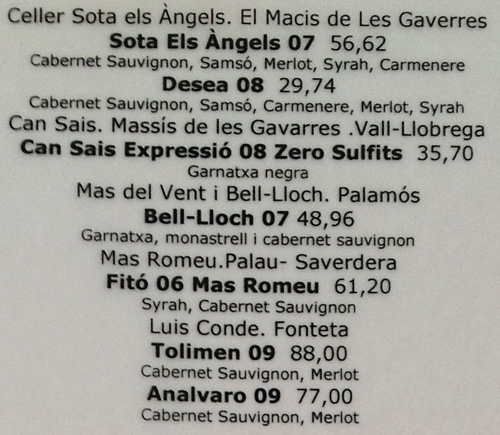 Celler de Can Roca The new wine list of the world’s best restaurant makes us happy not only because we see that they spell as badly as the rest of us mortals who don’t have Michelin three stars, but also because it includes a few excellent top-end Empordà wines that we love. There are even some rare pearls hardly known outside of Empordà such as Sota els Àngels, Mas Romeu or Mas Anglada (who’s the source of the photo, btw).

Bottle Notes “Celeb Chef Dishes on His Wine Likes“. Turns out that Bobby Flay really digs on the Priorat wines in a turn of events more properly named, “Boy meets Grenache”. Now we have something else in common with Bobby besides food made with raw fire.

Alice Feiring “The challenge for Georgian wine” is a short post with poignant points about the idiosyncrasy of being certified and actually knowing somethin’ about wine.

Decanter “Making wine in Thailand” as in yes, they actually do make wine in Thailand. As to why, that remains to be seen, something about “climate” and “change” mixed with “because they can”.

Tim Atkin “In search of wine expertise” calls out what might be an “expert” and what might not be.

NithinCoca “The Rise and Fall of Couchsurfing“. But don’t feel sorry for it as it should have a couch to land on (provided the host doesn’t flake).

PalatePress “Wine Competition: For Whom the Medals Toll?” dishes up the dirt on the how tarnished all those wondrous “gold” medals are and why you should see them as window dressing on your bottle.

El País [Es] “Size does matter” shows a crap ad for Jerte cherries that actually had to be pulled from Spanish TV due to an unbounded degree of sexism. It also shows that political correctness dropped anchor somewhere out in the middle of the Atlantic.