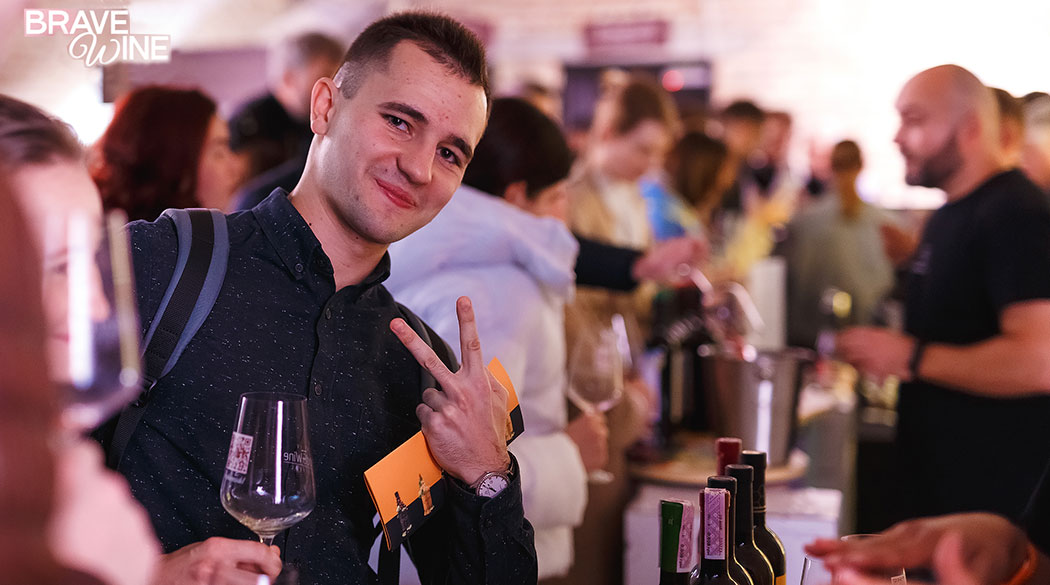 Much like all other aspects of the country, Ukrainian winemaking is going through extreme times.

The 2022 vintage has been one of the best of the previous decade–according to those who were able to harvest the grapes this year. Unfortunately, there are many other wineries who have to wait for sappers (demining teams) because the Russian deployment of landmines is preventing them from entering their vineyards and making use of this high-quality vintage.

Both within and outside of Ukraine, the demand for quality Ukrainian wines has grown. But this is unfortunately countered by the fact that countless wine stocks were lost due to destroyed or heavily-damaged warehouses and infrastructure.

Ukrainians continue to work, volunteer, and live their lives while at the same time their cities and homes are being bombed and the majority of their infrastructure destroyed. It’s become common parlance in Ukraine to use the phrase “the war-life balance.”

So, how do wineries and the wine community at large manage to strike a Wine-War-Life balance in the face of daily air raids, bombings, and a lack of electricity and in turn, water?

I was recently sent a video from the Mykolaiv region’s winemaker Volodymyr Falco of FalkoWin winery, in response to my question “How are you?”. Their winery is situated just on the border with the frontline which has now moved a bit due to the retreat of the Russian Army from Kherson, although dangers still persist. The video showed a few children’s strollers and beds among the wine barrels. “When our village was been attacked, we started using our cellar as a bomb shelter. We are helping to save the lives of future winemakers. More than five families found shelter here”, he said smiling.

“Did you make any wine this year?” I asked.

“Of course!” he replied and then sent me two more videos.

The first one showed him pressing the grapes.

“Look! What stunning juice! Cabernet, ‘The King of Grapes!'”

Then there was the other video, but from his vineyards.

“This year, we were only able to harvest a portion of our vineyards. Do you see this small mine in the soil? We were very fortunate that it did not yet explode. However, this means we have no access to our vineyards [one mine means there are probably more], so we are waiting for the sappers to free our land from this shit.”

He was so incredibly calm in that video that I can’t help but wonder how something so out of the ordinary became our new normal.

Another winemaker, Alexandr Mironenkpo who owns the winery Graevo as well as two wine shops in Zaporizhzhia told me during a recent interview, “My winery is located in a building that was built as a bomb shelter during Soviet times. It can withstand a nuclear attack. And of course, we have plenty of wine here, so even if we are attacked, we will be fine.”

I realized that the joke wasn’t a joke.

“Yes, we are right on the frontlines, but we may still be able to produce wine this year. My vineyards are now three years old and this year was supposed to be the first harvest. Unfortunately, my land is currently under occupation and I have no idea if the vines still exist. But we were able to purchase some grapes to make a 2022 vintage. We bought Cabernet Sauvignon, Saperavi, Chardonnay, and Riesling but we couldn’t get any Citronny Magaracha [Editor’s note: a white cross that’s Rkatsiteli-based and created in Ukraine] due to the occupation of a supplier who used to sell it to us. It’s a shame because Citronniy is one of our signature wines and it was even presented in La Cité du Vin in Bordeaux.”

I asked Svetlana Tsybak, the commercial director of Beykush Winery near Mykolaiv how they are managing.

“We were fortunate in that our vineyards suffered no damage, despite being only a few kilometers from active military operations. On the days when there was heavy shelling, we didn’t go out to the fields. In the end, we harvested really good grapes in nearly the same quantity as last year. At the same time, we are also suffering a great deal from a labor shortage at our workplace. Some of our staff joined the army from the very beginning, while others fled the country because it was no longer safe to remain in the Mykolaiv region.”

The continued lack of glass is still a significant issue for wine producers.

All European companies have been commiserating about a shortage of bottles on the market, so one can imagine that in Ukraine, where the Hostomel Glass factory, a key bottle provider, was bombed in March, the situation is even more difficult. Another bottle producer in Ukraine is located in the Dnipro region, however they are unable to handle the rising demand. All of these problems have been further compounded by the Russian attacks on Ukrainian civilian infrastructure such as power plants causing widespread outages; a tremendous issue beyond glass especially now that the snows are now starting to fall.

Small craft wine producers joined forces to import bottles from other countries. For instance, producers along the northern coast of the Black Sea are importing bottles from Moldova as a group. Unfortunately, prices increased dramatically, so when adding in logistics costs and the wild fluctuations in the currency exchange rates, there have been significant price increases.

On October 17th, another tragic event shocked the entire Ukrainian wine community. That morning, all of Ukraine was heavily bombarded by Russian missile attacks, targeting civilian infrastructure once again. More than 30 missiles and drones hit Kyiv on just that one day.

One hit a civilian apartment building in the city center, where Viktoriya Zamchenko, the sommelier from the well-known Good Wine shop and wine distributer, resided. Viktoriya was pregnant and both her, her unborn child, her husband and their cat were killed. Her coworkers created a special stand inside their shop to honor her and her undeniable passion for work and wine.

When I was in high school, I went to a historical science conference to present the topic of “culture and war.”

I spent a few weeks in local archives looking through newspapers and letters from WWII. One thing that puzzled me was how people involved in the war continued to hold concerts, theater performances, and write new songs. I wondered how it was possible.

This is a question that I no longer have after observing how people organize wine festivals, conferences, and film premieres in Ukraine in the middle of air raids and electricity outages.

Many small craft wineries sell their wines to customers directly at wine festivals. Because there have been no events for a long time due to Russian aggression, these wineries had few opportunities to find new customers. As a result, Sergiy Klimov, the organizer of the Kyiv Wine and Food Festival, took the initiative and decided to hold the “Brave Wine” festival [pictured above] in Kyiv this past September.

“The most important task for me was to find a secure location for the festival. The wine stands were constructed underground in a space that can also be used as a bomb shelter. We were extremely lucky to only have one air raid during these days. So, the guests were all safe. Of course, that festival was nothing like the events we held during peaceful times. We didn’t have any entertainment activities, just space for educational tastings and lectures. Normally, we have more than 30 wineries present their wines during the festival, but this time there were only 18 [Ed. Whoa!]. At the same time, we had restrictions on the number of guests we could accept” says Sergiy.

There was another significant cultural event that occurred in the first few days of November. Roman Zajcev, the owner of ‘Серцевина‘ (Heart of wine), an informational website on wine, has released a documentary film titled “Wounded Land” about wineries and wine businesses that were harmed by Russia’s invasion of Ukraine. The presentation was held in Kyiv and was very successful. The same film was shown in Lviv during the Wine&Art Lviv Weekend that took place on 12-13 November and raised over $6,000 USD to buy prosthetics for wounded civilians and military. Some of the episodes of the documentary are also available on YouTube.

There are currently at least two book projects about Ukrainian wines in progress. One is being written by Anna Yanchenko, who previously published the book ‘Wine without rules’. The second is a collaboration between Ukraїner and Sergiy Klimov which is a history of wine in Ukraine as, despite our centuries of making wine, it appears that our history in this pursuit has not been thoroughly researched before. To be honest, it’s difficult to find any structured information about Ukrainian winemaking before the period of the Russian Empire.

Another piece of good news is that the owner of Vitis School, Olexiy Kapusta, has launched the first online educational course in English about Ukrainian wines at the Udemy platform. He funded the project through the Kickstarter crowdfunding platform and is donating the profits to a charity fund to help small winemakers in rebuilding their damaged wineries.

Winemakers continue to launch new products and invest in equipment despite the war.

“We continue to see producers invest in new equipment or modernize what they currently own. We now have contracts in Odesa, Transcarpathia, Mykolaiv, and Zaporizhzhia. We’re mostly talking about large-scale wine and spirits producers”, says Volodymyr Zhitar, co-owner of IBP Group company, which supplies equipment.

“Via these orders we can see that wineries are investing in equipment that aids in the storage and stabilization of wines. Those located near the front lines are investing in relocating production facilities or compensating for capacity shortages caused by Russian occupation. None of our clients are establishing new wineries however, but some are attempting to complete projects begun before the full-scale invasion. At the same time, before the full-fledged war, we had a lot of orders from small winemakers who had been growing during recent years. Sadly, we are no longer receiving orders from them.”

The Russian war in Ukraine continues to rage, destroying homes, and killing innocent civilians. At the same time, many people are adjusting to their new reality and attempting to live a normal (as possible) life.

Ukraine’s winemakers are not an exception. They are doing what they do best: producing good wines while believing that we will undoubtedly raise the 2022 vintage in a salute to victory.