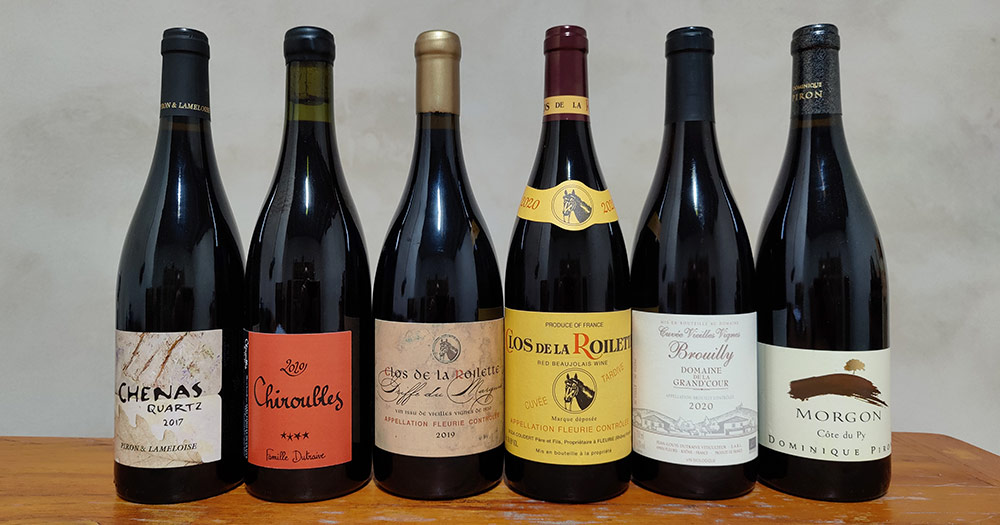 I’m always saying that I never drink enough wines from so and so region because it’s the truth. I’ve only one life with one liver. On top of that, where are only so many hours in the day, many of which can’t be filled with the glory of wine. But, even when “wine o’clock” is reached, many glasses are already filled with the fine wines of DOQ Priorat and DO Montsant where I live so there’s just not a lot of empty space to fit in all the other wonderful wines in the world.

All that said, I never manage to drink enough from Beaujolais.

I received a very nice set of wines from 8 Wines the other day as a sample of what they’re providing (*). While focusing on selling a great many wines from all over the world, they have a number of mixed cases you can buy and this was their “Beaujolais Premium” offer.

I have to admit that I was a bit nervous of this as while they’ve scored all the wines on their site, I’ve often found that companies with these kinds of broad offers usually grab up little pieces wherever they can, moving wines on regional identity more than anything else. As I’m not intimately familiar with these producers, I was curious if this was the case here. Amazingly, my scores (full reviews below for subscribers) lined up nearly exactly with how they’d scored them and there wasn’t a single wine that was below 90 points. So, well done.

They all showed great Beaujolais typicity with this bright, crisp red fruit, vervy acidity and that lovely little hit of granite minerality that gives Beaujolais its singular aspect. The Fleurie and Brouilly wines were especially noteworthy and, if not wanting to buy the mixed case, worthy of picking up on their own as they’re very well priced.

Oddly enough, it was the Morgon wine that was my least favorite out of the group despite the fact I’ve historically enjoyed this Cru a great deal although certain producers (cough, Foillard, cough) have really left me a bit disappointed in recent vintages. Maybe some would say that I’m just “maturing” as a Beaujolais drinker.

If you’re based in the EU and are looking for wines from around the world, I’d definitely recommend giving 8 Wines a perusal as the selection is broad and well-honed.

* Samples were sent by 8 Wines to Hudin.com for review. There is no commercial nor transactional relationship between Hudin.com and 8 Wines.